Ernest Charles Prewett was born on 8th August 1859 and baptised in St Mary’s Church in Thornbury on 4th September 1859.   He was always known as ‘Charles’.   His parents were Charles Prewett, a livery stable keeper and his wife, Emma (nee Bevan).  Click here to read more about Charles and Emma

On 21 August 1872 Charles appeared at Sodbury District Court having got into trouble.  He was only aged 13, but the report shows that he ‘known to the police for 6 years’.  He was convicted of stealing a meerschaum pipe and sentenced to 3 years in a Reformatory.  He was described as height 4 ft 10.5 in, brown hair, hazel eyes with a fair complexion.

Charles joined the Royal Navy in 1874.  He was described as 5ft 0 3/4 inches, brown hair, grey eyes and sallow complexion.  He served on several ships, initially as a Boy 2nd Class and then as a Boy 1st Class and finally an Ordinary Seaman.  He continued until May 1882 when he was invalided out of the service.  There was one period in 1878/79 when he served three periods in the cells.

In 1883, Charles married Elizabeth Amelia Llewellin in Bristol.  Elizabeth was born on 8th August 1858 near Meg Thatcher’s Green, Bristol.  She was the daughter of Charles Llewellin and his wife Elizabeth Amelia (nee Sheppard).  The 1890 rate book and the 1891 census shows Charles was living at 10 Upper Bath Road.  The census shows Charles was a labourer and gardener aged 31 living in the house with his wife, Elizabeth Amelia aged 31 from Bristol with their children: Emma aged 6, Mabel A aged 4 and Charles aged 3 and an aunt, Hester Walker, a widow aged 86.  Click here to read about Hester Walker 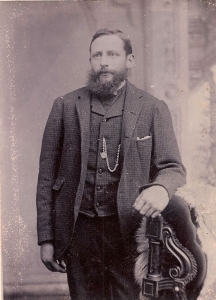 Apart from the children listed above as living with them in the 1891 Census they had one other son, Ernest, born in 1883.  He was ‘adopted’ by Jesse Hook and his wife who were living in Tytherington.

In 1894 Charles was elected as a parish councillor.  The election was a strange affair – following the Local Government Act 1894, a parish meeting was held on 4th December 1894.  Eleven men were elected by a show of hands, including Charles Prewett, who received 53 votes.  The vote was however challenged by one person present, Richard Quin, who demanded a poll.  At the subsequent election on 17th December Charles’s election was confirmed when he received 194 votes.

He was re-elected at the parish meeting of March 1896 with 80 votes, which was the most votes obtained by any of the candidates.  He was also re-elected in March 1898 with 55 votes, second only to Edward Stafford Howard who had 70 votes.  No poll was demanded.

It appears that in 1898 Charles and Elizabeth were living at the corner shop, dwelling house and bakery later known as 10 Chapel Street.  Charles was mentioned as the occupant of that property when it was put up for sale in June 1898. 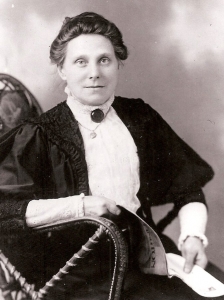 We understand that Charles was admitted to the Wotton Hill Lunatic Asylum on 4th June 1898.  He died there aged 38 on 22nd June 1898.  At the following Parish Council meeting held in July it was reported that Charles had been a very useful member of the Council and when considering a replacement, it was suggested that because Charles had always represented labour on the Council, his replacement should also be able to represent them.  A letter from Elizabeth was read to the council in which she asked to be appointed as caretaker of the Cossham Hall, a role which Charles had been carrying out.  It was emphasised that she was left with a large family and was totally unprovided for.  It was proposed that she be appointed for three months at a salary of £3 per annum, plus one shilling for each meeting held in the Hall.

In 1901 Elizabeth Amelia was living in what appears to be number 12 Upper Bath Road.  She was shown as a public hall keeper living with her children: Charles aged 13, Cyril aged 8, Florence aged 6, Grace aged 3 and a visitor Thomas Downes, a wood sawyer aged 60 from Gloucester.

When the children started at the Council Upper School in 1903 and 1904 respectively, Grace Prewett born 8th June 1897 and Cyril born 12th May 1892, the parents of both children was listed as Mrs Prewett.  Both children left school in 1904 and were shown as “left town”.  Elizabeth and the children moved to live at 6 Grove Road, Redland with her cousin, Fanny Evangeline Wise.

On 25th January 1914 Elizabeth re-married again at the Tyndale Baptist Chapel, Whiteladies Road, Clifton.  Her second husband was Charles Stephens born in Alveston in 1867, the son of Thomas Stephens a stone mason and his wife Elizabeth.  In 1901 Charles was a foreman in a coal yard living in Chapel Street, just round the corner from Elizabeth.  Elizabeth and Charles continued to live at 6 Grove Road, Redland.  Elizabeth died in Bristol on 20th October 1950 aged 92.

We are very grateful to Chris Ashman who posted details about this family with photos on the ‘Ancestry’ website.  We have used his information and photos below.

Of Charles and Elizabeth’s children:

Ernest – born on 29th September 1883.  The 1891 Census suggests Ernest was ‘adopted’ by Jesse Hook, an agricultural labourer and his wife, Elizabeth who lived at Moxham’s Farm in Tytherington.  The 1901 Census shows Ernest as a boarder with Jesse and Elizabeth in Alveston.  In December 1903 Ernest married Mary Jane Davis and they had six children.  They lived at Plum Cottage, Rudgeway.  In the First World War, Ernest joined the 2nd (South Midland) Field Company, Royal Engineers.  He was a Sapper when he was killed in action in France on 20th July 1916.  He was buried in the Aubers Ridge Cemetery, France and mentioned on the war memorial at St Helen’s Church in Alveston and at Olveston.  His photo is on the left.

The newspaper report of his death was particularly poignant;

“Sapper Ernest Prewett was serving in the 2/2 Field Co South Midland Royal Engineers.  He was no slacker: he volunteered for service the last week in March 1915, and during the term of his service his wife had considerable family losses.  He came home and buried his youngest child eighteen months old on May 27th 1915, nine weeks after he enlisted. and he also came home and buried his eldest son aged 11 years on March 7th 1916.  And now Mrs Prewett has lost her husband, thereby losing two children and her husband in about sixteen months……….much sympathy is felt for the widow and three surviving children.”

We know a little more about Mary Jane Prewett who appears to have been known as “Auntie Polly” from the South Gloucestershire War Memorials website.  Click here to see this site

Charles Albert – born 2nd April 1888.  The 1901 Census shows that he lived with his mother and his siblings in Upper Bath Road.  We understand Charles started work in a business which had been set up by his grandfather, Charles Llewellin.  He didn’t get on with the family who had taken over the business and Charles ran away from home aged 14 years in 1902.

He emigrated to Canada on 6th March 1908.  He left Liverpool on board RMS Empress of Britain bound for Mount Elgin, Ontario.  By 1920 he had moved to Alameda in California where he became a house painter, married twice and died on 12th November 1963 aged 75.  He was buried in the Evergreen Cemetery, Oakland,  Alameda.  Charles’s photo is shown on the right.

Cyril Llewellin – born 12th May 1892.  Cyril married Mary Frances Helen Couper (known as Nellie) in Keynsham district in 1914.  They had one daughter, Winifred born in February 1917.  Cyril was serving as a Private in the 1st Battalion of the Wiltshire Regiment when he was killed in France on 2nd August 1917.  His name appears on the Menin Gate Memorial at Ypres.  Cyril’s photo is shown on the right with Mary and baby Winifred.  Mary later re-married and settled in High Street, Staple Hill, Bristol.

Cyril was commemorated on a window at Tyndale Baptist Church Whiteladies Road in Bristol.  The window explains that Cyril was an apprentice upholsterer before he joined the army in 1917.  It goes on to say that he was serving as a batman to a commanding officer when he was killed instantly by a bullet to the head after only a few weeks at the front.

Florence Winifred – born on 14th August 1894.  She married George Stevens in Bristol in January 1919.  George was an American who had served in the Canadian Army in the First World War.  After the marriage, they emigrated to Cranbrook, British Columbia, Canada.  They had two children.  In 1923 the family moved to Portland, Oregon and in 1930 she was in San Luis Obispo, California.  Following George’s death there in 1930, Florence and her children returned to live with her mother at Grove Road, Redland in Bristol in 1931.  She died in Bristol on 8th July 1958 aged 63.  Florence is shown in the photo on the left.