Innkeeper and Carrier of Thornbury

Charles Prewett was baptised on November 17th 1817.  He was the son of James Prewett, a coachman and his wife, Hester who lived in the High Street in Thornbury.  Click here to read about James and Hester.

Although the 1841 census does not say so, the property where his parents, James and Hester, lived was in what is now called the “The White Lion”, a public house which is still in the High Street.  Prewetts Trade Directory of 1842 shows that James Prewett was a coach proprietor and beerhouse keeper.  The will of John Birt written in 1840 makes it clear that he owns two messuages and a garden in the High Street and that one of these is occupied by his tenant James Prewett.

Despite his family background the 1841 census shows Charles Prewett started his working life as a tailor.  Charles was still a tailor and living with his parents in the High Street in the 1851 census.

It is possible that James Prewett gave up the tenancy of the beerhouse about this time, certainly he died in 1855.  A poem of 1857 called “The Rover” (which was the name of James Prewett’s carrier business) tells that there have been changes at the pub in the High Street.

This appears to indicate that that the White Lion, under new management, was trying to compete with the Swan opposite which was an established coach house and had put a lion over its door.  However we have been told that at the time the White Lion was lacking in stabling facilities.

The photograph above is believed to be of Charles Prewett.

In 1852 Charles, described as a livery stable keeper, married Emma Bevan in Bristol.  Emma was the daughter of James Bevan a tailor and his wife Ann.  This means she was the granddaughter of an earlier owner of the “Lion House”, another James Bevan.  Emma was baptised on 1st July 1827.  In 1841 she had been working as a milliner’s apprentice living with her parents in the High Street and by 1851 she had become a dressmaker still living there with her parents.

Charles Prewett purchased the “Lion House” from George Fewster in 1852 for £140 including the stable and coach house with the condition that he should also pay George Fewster a life annuity of £10 in two half yearly payments.  As a carrier he ran daily return trips to the Full Moon in Stokes Croft in Bristol.

When his daughter Florence Prewett was baptised on March 4th 1855 Charles was described as a tailor and coach driver.

In April 1855 Charles’s father, James, died and was buried at Oldbury.  In 1855 Charles found it necessary to mortgage the “Lion House” to Thomas Williams, a farmer from Itchington, so on the 15th of February he secured a mortgage of £100.

Thomas Williams from whom Charles Prewett had a mortgage died on 28th January 1857 leaving his sons Thomas Williams of Littleton upon Severn, a beerhouse keeper, and James Williams of Thornbury, a cordwainer, as the trustees and executors of his will.  They requested the mortgage principal be paid to them as trustees, so the mortgage was transferred to George Jones, yeoman, of Lyde’s Farm, Chipping Sodbury on the 21st of October 1857.

Charles took over the licence from the previous White Hart that had stood at the corner of Latteridge Lane, part of which still stands adjoining what is now the National Westminster Bank.  He transferred the name and licence from the White Hart (which was closed and demolished to build the bank in 1858) to his Castle Street property (what is now 9 Castle Street).  He continued as a beerhouse keeper and carrier until 1862 when Harris Collings bought the property and renamed the pub the ‘Black Lion’.

By 1860 Charles Prewett had repaid the principal sum of £100 and the interest due to George Jones, but the property had not been re-conveyed.  Since Prewett wished to take up a mortgage of £220 from Joseph Weekes, yeoman, of Sundays Hill, Falfield, on the 25th of April George Jones joined with him in conveying the property to Joseph Weekes.

The 1861 census shows Charles and Emma were living in 9 Castle Street where Charles was an innkeeper aged 42.

Emma was aged 36 and she was employing three apprentices at millinery and dressmaking.  They were living with their children: Florence aged 8 and Charles aged 1 (baptised Charles Ernest on 4th September 1859) and a servant, Mary Greenman aged 16.

Another child, Ada Emma Prewett was baptised on 7th July 1861 when Charles was described as a beerhouse keeper.  In 1880 Ada became the second wife of George Edward Chambers.

On the 13th of November 1861 Charles requested Joseph Weekes to advance him a further £30 on the mortgage but by 1862 he was negotiating to sell it to Harris Harris Collings, a silversmith of St Mary Redcliff, Bristol.  Perhaps Charles had money problems, although the reason for the sale was probably the death of his wife, Emma, who died in April 1861 leaving him with three small children.  Ada Emma Prewett, their third daughter was baptised after her mother’s death.  The advertisement here on the left appeared in the Bristol Times and Mirror in 1862. 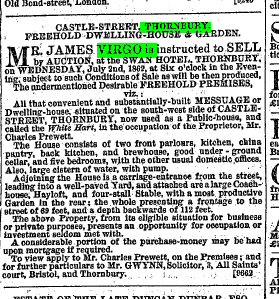 Please click on it for a large photograph.   It is notable that it still refers to the pub as “The White Hart“

Shortly before the sale of the property George Fewster, then of Canterbury, Kent had contracted to sell him the £10 annuity.  On the 17th of September 1862 the “Lion House” was sold to Harris Harris Collings for £490 of which £100 was paid to George Fewster, £250 to Joseph Weekes and £140 to Charles Prewett.  Interestingly, the indenture of the 17th of September mentions that the stable and coach house with the yard and garden adjoining were subject to a perpetual annual charge of five shillings, payable to the Mayor and Corporation of the Town and Borough of Thornbury on the feast day of St Michael the Archangel, for the benefit of the poor of the Borough, being the gift of John Jones in or about the year 1673.  There was also a perpetual annual rent of 10d, commonly known as the “Borough Rent.”  This was payable on the whole property on the same day, to the Lord of the Borough.

Shortly before the sale of the property George Fewster, then of Canterbury, Kent had contracted to sell him the £10 annuity.  On the 17th of September 1862 the “Lion House” was sold to Harris Harris Collings for £490 of which £100 was paid to George Fewster, £250 to Joseph Weekes and £140 to Charles Prewett.

In 1864 Charles married Maria Williams (nee Hopton) in the Clifton area.  The 1871 Census shows that Charles and Maria had moved to Upper Bath Road.  Maria was ten years younger than him.  He was a tailor and she a laundress. Click here to read about the later life of Charles Prewett.  The 1871 census also shows that his youngest daughter Ada Emma Prewett was living with her uncle James Bevan at 7 Pullins Green.