The Pullens (or Pullins)

We have heard it suggested that Pullins Green was named after the Pullin family who lived there.  This theory has been challenged on the basis that the family who lived there spelled their name Pullen, spelt with an E not an I.  It is fascinating to find that although the family in the 20th century spelt their name with an ‘E’, it was spelt with an ‘I’ in the 1800s.  Apparently when this change was discovered during the 1900s the male members of the family changed the spelling of their names by deed poll to Pullin.

In spite of finding that the family did have same name as the Green, we are unable to confirm that the street was named after them.  Our earliest record of the area being called Pullins Green was back in 1861, long before the family is known to have had any association with the place.  There was however a Jabez Pullin living in nearby Horseshoe Lane in 1851 – Jabez was a scripture reader born in London, so it is possible (although we may never know the whole story) that it was named after him.  Read more about Jabez

James and Eliza Pullen
The 1890 Rate Book and the 1891 Census shows James and Eliza Ann Pullen living in the house now known as number 23 Pullins Green.  James came from Cromhall, born in 1863, the son of William and Hannah Pullin.  William was an agricultural labourer from Townwell in Cromhall.  Initially James seems to have followed his father in his occupation as the 1881 Census shows that James was a farm servant in Stidcott Lane Farm, Tytherington working for Ann Verender.

By 1891 James had changed his career and had become a grocer.  He was aged 28.  Eliza Ann was aged 32 born in Itchington.  They had two children: Edith Mary D. aged 4, and Thomas Slade aged 1 month.  A newspaper article of November 24th 1894 in the Bristol Mercury suggests that this attempt to make a new life ended badly.  Messrs Luce Young and Luce advertised an auction of the household effects, stock in trade and horses and harness of James Pullin, grocer of John Street.  Sadly the sale was at the request of the Official Receiver so it would seem that the couple and their young children were facing difficult times.  On 29th November 1894 there was a report of the details of James’s bankruptcy.  His liabilities were £898 15s 8d and the deficiency was shown as £268 7s 8d.  The Official Receiver said ‘The debtor started as a family grocer and provision dealer at Thornbury, without capital, nine years ago.  The causes of his insolvency are stated to be sickness of wife and family, bad trade and bad debts.  He alleges that he first became aware that he had not sufficient property to pay all his debts in full about three weeks ago; but he, of course, ought to have known of this earlier, looking at the amount of his deficiency, and could have known if he had kept proper books of account’.  James was under notice to quit his premises.  A creditor stated that James had told him two years previous that he could not pay all his debts if pressed.  The Receiver thought James was honest and hard-working and ought to have stopped two years previously.

By the 1901 Census James and Eliza were living in the house which later became known as ‘The Cottage’ 1 Horseshoe Lane.  James had changed his job again and was a gardener (not domestic) aged 38 and his wife was Eliza Ann aged 42.  They had four children: Edith M. A. aged 14, Nellie E, a domestic nurse aged 13, Lillian S aged 7, and Herbert G aged 4.  It would seem that young Thomas, the baby in the previous census, had not survived.  The records show that the death of a Thomas Pullin was registered in the December quarter of 1891.

They seemed to have moved again as when their son, Herbert started school, the family’s address was Sawmill Lane.
James died in 1904 aged 41 years.  The 1911 Census shows that Eliza was living at 8 Pullins Green.  Living with her were her son, Herbert George aged 14 and married daughter, Edith May Ann Carver, a dressmaker aged 24 and her son, Leslie Carver aged 1.  When Herbert was married in 1920 they lived with his mother at 8 Pullins Green.

We understand that Eliza later moved to live with her daughter, Edith Ann Carver and her son Leslie Carver and his wife, Bertha who lived at 9 St John Street.  The Carvers later moved to 9 Pullins Green.  In January 1936 the Gazette carried a report of the death of Eliza Ann Pullen who had died on Christmas Day 1935 in St John Street.  The funeral service was held in the Baptist Church where the Pullens had worshipped for so long and where her son was Sunday School Superintendent.  She was buried in the same grave as her husband in the graveyard adjoining the Baptist Church. 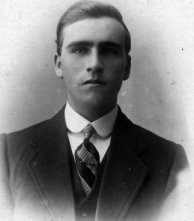 Herbert George Pullen was born on 6th March 1897, the son of James and Eliza Ann Pullen.  He started at Council Upper School in 1904 when the family were living at Sawmill Lane.  He left school in 1910.

Herbert started working for English’s bakery in St John Street.  His job was delivering bread with a horse and cart. Whilst making a delivery to Wickwar, Herbert met Jessie who was ‘in service’ there.  On 14th September 1920 Herbert married Jessie Elizabeth Wheeler.  Jessie was born in Tytherington on 11th December 1899, the daughter of Edwin and Elizabeth Wheeler.  The 1901 Census shows us that Edwin was a stone quarryman aged 25 and born in Winterbourne.  Elizabeth was a dressmaker aged 33 from Tytherington.  They had two children: Edith M Davis aged 8 and Jessie Wheeler aged 1.  We understand that Jessie’s father had liberal views and he lost his job and was thrown out of the tied cottage for advocating those views.  The family moved to Thornbury where they rented a house in Gillingstool from the Grace family.

When Herbert and Jessie married they lived at the cottage now known as 8 Pullins Green.  It seems that they were living in Pullins Green in 1921 where Nellie was born and where the next three children, Edwin Herbert James, Christine Lillian and Jean, were born.  The house had only 2 rooms and was too small for their growing family, so they moved to a larger house at 5 Pullins Green and David Wheeler was born in 1933.  The Pullens adopted the name of ‘Ivanhoe’ for the house. Herbert left English’s to work at Dearings shoe shop on The Plain.  His job was delivering shoes along with Hubert Spill who also lived in Pullins Green.  During the war Herbert moved to work for Thornbury Rural District Council and became a rent collector.  To get the job he had to submit his birth certificate on which he found to his surprise that his name was not ‘Pullen’ but ‘Pullin’, with the same spelling as the Green.  The two sons had to re-register their names but the daughters had married and did not need to.

We understand that Herbert acquired number 1 Crispin Lane which was derelict.  He had it knocked down to create a rear access to his house at 5 Pullins Green.  We heard that he may have hoped to build a bungalow on the plot, but couldn’t get planning permission.  When Herbert sold number 5 to Rowe’s the vets who were operating from number 3, Rowe’s used this area to provide access to a car park for the vet and then presumably sold number 5.
Herbert and Jessie continued to live in number 5 until the 1970s.  In 1950 Jessie’s mother was living with them.  Then the Pullens moved to a bungalow in Woodleigh.  The photograph on the right shows Bert and Jessie in 1971 at the opening of an extension to the Baptist Chapel Sunday School.  Herbert George died in October 1977 aged 80.  Jessie Elizabeth died in February 1981 aged 81.

Their five children are shown in photo on the left – left to right Edwin, Jean, Nellie, Christine and David:

Nellie – trained to be a nurse at Thornbury Hospital, but she had to give up when she married Raymond Sherman. Ray worked for Parnalls at Yate and later at Wick.  They had one daughter, Elizabeth Mary born in 1942 and a son, Dennis born in 1948.  Nellie later returned to Thornbury and spent her last years at Quaker Court sheltered housing.

Christine – married Harry Tymms, the son of Harold Frederick and Helena Tymms in 1947.  Harry went to the Grammar School and then to the Bristol Baptist College.  He was ordained in 1951.  They settled to live in Alveston.

Edwin – born on 20th August 1925.  He married Marjorie F. Humphries in 1950 and they moved to Tytherington where he worked as an electrical contractor.  We understand that he was also a projectionist at Thornbury Picture House before and after World War II.  His family has told the museum that Edwin, due to ill health as childhood was unable to serve in the forces, but as an electrician he was in a reserved occupation.  One of his more interesting jobs during the war was to lay electric cable with lights across land on the Mendips.  When these lights were switched on at dusk they were intended to give the impression from the air of being from a town.  The family said that this idea must have been at least partly successful as there are still craters on the Mendips which are said to have been made by German bombs.

This story seems to have been confirmed by Wikipedia which says that this project was called “Starfish” and was the idea of Colonel John Turner who was commissioned with the task of creating decoys for seven major cities in Britain.  The plan included not only the lights but also fires as the sites were to look as if they had recently been bombed and so were the German’s intended target that night.  Although an estimated 968 tons of ordnance were dropped on these decoys, archaeological excavations of the Mendip site has according to Wikipedia not yielded any evidence.
When he retired from his full time job Edwin and and his wife Marjorie moved to Kewstoke.  They had three children, Ruth, Keith and Roger.

David  – worked in the quarry.  At the Thornbury Baptist Church in November 1955, David married Sylvia Vizard, the daughter of Frederick Ernest Vizard and his wife, May Sophia.  Their first home was at Hillside, Sibland.  In the 1961 and 1964 Electoral Registers they were listed as living in 10 Bath Road.  Click here to read more about the Vizards