of Horseshoe Lane and Rock Street

The 1899 Rate Book and the 1901 Census shows that 19 Horseshoe Lane was occupied by Maria Purnell, a widowed seamstress aged 42 born in Berkeley, and her children: Edward Henry, a builder’s labourer aged 15, Levi aged 11, Austin aged 8, Mabel aged 6 and Ethel aged 3.

Maria had been baptised at Stone on 21st November 1858, the daughter of Thomas Sherman (Shearman), a labourer and his wife, Ann, who both lived at Woodford.  On 8th August 1875 Maria married Mark Church aged 28, a labourer and son of William Church, a labourer from Rockhampton.  They had a daughter, Ada Mary born in Thornbury in 1881.  Mark died and was buried on 22nd March 1882 aged 37 years.  His address at the time was the Thornbury Workhouse.  Maria re-married at Thornbury Church on 9th October 1882.  Her second husband was Thomas Purnell, aged 23, the son of Alfred Purnell, a carpenter.  The 1887 and 1890 Rate Books show Thomas as living in 8 Rock Street.  The 1891 Census shows the family living in Gillingstool.

Thomas died at Crossways on 4th February 1897 aged 39.  We suspect that shortly after Thomas’s death, Maria moved to live in 19 Horseshoe Lane.  Her daughter, Ethel, was born in Crossways in July 1897 and when her birth was registered on 24th August 1897 Maria was living in Horseshoe Lane.  Maria is listed as the tenant of 19 Horseshoe Lane in both the 1899 and 1905 Rate Books.  The 1901 Census shows the house was occupied by Maria Purnell, a widowed seamstress aged 42 born in Berkeley, and her children: Edward Henry, a builder’s labourer aged 15, Levi aged 11, Austin aged 8, Mabel aged 6 and Ethel aged 3.

Maria died on 27th November 1905 aged 46.  Her son, Edward Henry, took over the house and the responsibility of looking after his brothers and sisters.  He was working as a builder’s labourer.  The Council School records show that the two youngest children, Ethel and Mabel, moved to live in an orphanage in 1906.  We were able to locate them on the 1911 Census living in an institution in Bristol and subsequently confirmed this to be the New Orphanage Houses, Ashley Down (otherwise known as the Muller Homes) which they were admitted to on 23rd October 1906.  We are extremely grateful to Garry George, a distant relative of the Purnell family, for obtaining and sharing with us copies of the detailed records of the girls which are held by the Muller Trust.

The records showed that Edward’s eldest sister, Maria, was caring for her two young sisters following the death of their mother in November 1905.  By August 1906 Maria had sought the help of the local vicar, Revd Cornwall.  A letter from him to the Orphanage says that Maria ‘had tried to keep the home together but finds it too much for her. She asks me to ask if if it would be possible for you to take the two small children. She would then go out to service which would be much better from every point of view, moral and material for her’.  A formal request followed showing that their parents had left their children ‘some very poor furniture in a three roomed cottage’ and that the family was living off the earnings of the two eldest brothers.  The girls were vaccinated and were given satisfactory medical checks.  Maria wrote a letter saying she had read the rules of the orphanage and was willing to conform.  They were then approved for admission on condition that Revd Cornwall, H. P. Thurston (Clerk to the Guardians) and Edward and Maria Purnell would take responsibility for them if the orphanage discharged either or both of the girls.  Mabel and Ethel were admitted to the South Wing of Orphan House, No. 3 on 3rd October 1906.  We don’t know anything relating specifically to Mabel and Ethel during the time that they lived in the orphanage.  Generally however they probably had a reasonably good life.  The excellent Muller Trust Museum in Bristol shows how they attempted to prepare each child for independent life.  In the case of young girls they were prepared for life in service and this is what happened in Mabel’s case.  When she was aged 17 she was sent on 6th February 1912 as a general servant to ‘Mrs Bunney, 10 Dickenson Road, Weston Super Mare.’  On 20th April 1914 (just before she was 17) Ethel was sent to live with her sister, Maria Jarrett, living at 1 Princess Buildings, Box, Wiltshire.  Maria had married Frederick Jarrett in the Bristol area in 1910.

We also note from FreeBMDs that there are records of Mabel and Ethel marrying in Thornbury but we don’t know at this stage whether they are the same people.

Of the boys we know that in 1906 Levi Purnell applied to join the Bristol Militia.  He was 17 years old by that time and working as a farm labourer for Mr Burchell, although he still lived at Horseshoe Lane.  This is not the first time that Levi had applied to join.  He had already applied to the Gloucestershire Militia and been found medically unfit after three days because of his eye sight.

In the First World War we know that both Austin and Levi were listed as serving in the Army.  When the Gazette reported on the list of local men and women to whom presents were sent at Christmas (because they were serving in the Forces) Levi was shown to be a gunner based in Gosport in 1916 and Austin was based at Salonica in Greece in both 1916 and 1917.  We know that Levi married Ruby G. P. Laurence in the Fareham area in 1916. 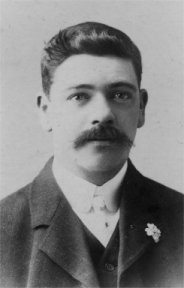 On 5th November 1910 Edward Purnell married Minnie Maria Rugman.  Minnie was born in Olveston on 5th February 1885, the daughter of Samuel Rugman, an agricultural labourer and his wife, Sarah Ann (nee Moss).  The 1891 Census shows that the family were living in the Alveston area and that Samuel Rugman was born in Thornbury, Sarah Ann was born in Alveston and Minnie, her elder sister, Sarah Jane, and younger brother, Edward Samuel, were all born in Rudgeway.  We understand the Rugman family lived near The Fox at Old Down.  It appears from the Cemetery burial register that Minnie was living in Horseshoe Lane in 1901.  Her son, Reginald Donald, was buried on 25th January 1901 aged only 9 weeks.

The 1914, 1915 and 1916 Prewetts Street Directories list Edward as still living in Horseshoe Lane.  They also mention he is a member of the local fire brigade.  Edward (shown in the photo on the left above) was born on 21st October 1885 and baptised on 6th December.

During the War Edward applied for exemption from military service and was granted conditional exemption.  His case was that, as a plasterer and tiler working for Tucker Brothers, “he was the only man who could do this particular trade and there are a large amount of roofing repairs and no other man to do the work”.  Edward joined the home guard, the 1st (City of Bristol) Volunteer Battalion of the Gloucester Regiment.  He enrolled on 26th September 1916 and served until April 1918.  He was described in his service record as being 5ft 10 and a half inches tall with 38 inch chest.  He appears to have been called up to join the regular army in July 1918 he applied for a renewal of his exemption.  His application mentions that he had been a plaster and tiler working for Tucker Brothers for 20 years.  We are not sure if his exemption was granted as we have a note saying that Edward served at some time for the Marine Engineers.  We are not sure of the source of this note.

During his youth Edward was a keen member of Thornbury Football Club.

The family must have left Horseshoe Lane at some stage.  His application for exemption dated July 1918 shows his address as Horseshoe Lane.  However the 1918 electoral register shows the family living in Pullins Green and we understand that they lived in one of the six cottages which later became 2-12 Pullins Green.  By the time Violet started at Council Upper School in 1919, Edward was living in a flat in the High Street, above the Social Club.  We understand that Edward used to run the club and that Minnie used to iron the green baize on the billiard tables.

From 1927, the electoral registers show just Minnie Purnell in Horseshoe Lane and Win Jenkins who lived a few doors away as a child remembers her living in 19 Horseshoe Lane with her daughter, Violet.  We understand that Edward developed a mental illness and was admitted to Coney Hill Hospital where he remained for about 10 years.  He died there on 8th 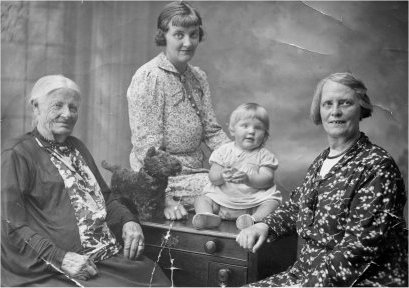 August 1946 and was buried in Thornbury Cemetery.

By 1935, Violet had married Samuel Longden and they were living with Minnie for a few years in 19 Horseshoe Lane.  By 1938 they had all moved to a house which later became known as 14 Rock Street.  Minnie died aged 71 years and she was buried on 15th October 1955 in the same grave as Edward in Thornbury Cemetery.  By 1965 Samuel and Violet had moved to 20 Streamleaze, one of the new flats built by the council opposite the Market.  Click here to read about the Longden family