The Electoral Roll shows that by 1921 Percy Reeves had moved into a house in Gloucester Road which we believe to be Coombe Cottage in Thornbury.  They were to live in the house for the next 40 years.

Percy Reeves was born on 14th November 1888.  Based upon the 1901 Census details, he was the son of Eliza Ann Reeves.  In the 1891 Census Percy was one year old and living in Pullins Green, Oldbury with his uncle, George Reeves, and his wife, Bessie Ann (nee Savery).

Percy’s mother, Eliza, married George Cole in 1894.  The 1901 Census shows that at the age of 11 Percy was living with his stepfather George Cole a carter and his wife, Elizabeth. George and Elizabeth had two other children at this time Evelyn Cole aged 4 and Edith Cole aged 9 months.

On 27th January 1908 Percy joined the Army in the Gloucester Regiment.  He was described as a farm labourer aged 18 years 2 months, height 5ft 8 inches, weight 126 lbs, chest 36.5 inches with 2.5 inch range with a fresh complexion, brown hair and grey eyes.  We don’t know how long Percy served in the Army at that time, but he was transferred to the Army Reserve.  When the First World War started he was mobilized again on 5th August 1914 and he served in France.  His army papers mention the Army Service Corps. He was demobbed on 22nd April 1919.  He was awarded the 1914 Star campaign medal, often called the Mons Star.  This medal was only awarded to those expeditionary forces who served in France from the outbreak of War to 22/23rd November 1914.

On 12th June 1920 Percy married Edith Worsley.  Edith was born in the March quarter of 1890, the daughter of James Worsley, a roadman and his wife, Hester, who lived at Easton Hill. (see below)

Percy Reeves was described as a labourer when his children were baptised and as a brickmaker according to the marriages records of his daughters.  We understand he worked at the Cattybrook Brick Works.

Percy and Edith had a daughter Edith Hester on 26th March 1921 who started school at the National School (now called St Mary’s School) in Thornbury in 1924.  She was at school there until 1935 when she left to start work.  Edith married Thomas Alfred Bennett in 1942 and was a cook at Thornbury Grammar School until she died at the early age of 23 in July 1944.

On 15th July 1922 a son Donald William was born and he started too at the National School in 1926.  The 1939 register shows Donald was living at home with his parents and was working as a shop assistant in a grocery.  In later life Donald and his wife Margaret lived at 2 Pullins Green.  Click here to read more

Percy and Edith’s second daughter Dorothy was born 26th April 1924 and she started school at the National School in 1928.  Dorothy married Douglas King, the son of Walter and Eliza King of Laburnum House in Gloucester Road. Click here to read more

James Worsley.  By 1931 Edith’s father, James Worsley (shown here above right) had moved into Coombe Cottage with his daughter and son in law. 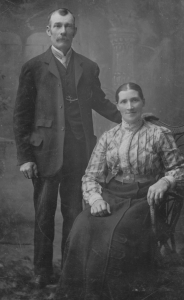 James and Hester Worsley May 1912

James was born in Iron Acton on 22nd July 1863.  The 1871 Census shows him living with his grandmother, Maria Worsley, in Dyers Lane, Iron Acton.  By the 1881 Census James had moved to live in Duckhole, Thornbury with his aunt Mary A Lambert and her husband George.   In 1889, James married Hester Hughes in the Bristol area.  Hester was born in Hill and baptised on 14th January 1866, the daughter of William Hughes, a labourer and his wife, Maria.

The 1911 Census shows James and Hester living at Easton Hill, with three of their children: Herbert, Victor and Hilda.  James was then employed as a roadman by the District Council.  During the First World War, James’s son, Herbert joined the armed forces in November 1916.  He was on the troopship ‘Transylvania’ when it was torpedoed by the Germans but luckily he was saved and taken to a rest camp in the south of France.  The thumbnail on the left shows Herbert in uniform.  Click on the thumbnail to see the full image.  Having survived the War, Herbert didn’t live much longer.

He died in Over Isolation Hospital aged 22 and was buried in Thornbury Cemetery on 17th August 1920. They had two daughters, Jean Iris born in 1926 and Brenda Monica born in 1933.  They were living at 58 Manor Road, Horfield during the Blitz.  On the night of April 3rd/4th 1941 Bristol was subjected to its longest night of bombing which lasted 12 hours.  Laura and the two daughters were all killed at Falmouth Road as a result of enemy action.  The three were buried in Thornbury Cemetery on 9th April 1941.  We think Arthur may have re-married in 1942, to Doris M Rowe, and he continued living in Bristol and died there in 1952 aged 58.

James Worsley continued to live at Coombe Cottage until he died May 18th 1954 aged 90.  His son in law Percy Reeves (shown above on the left outside the house with his wife Edith) lived in the house until his death on 16th April 1958.  The Electoral Roll shows that Edith Reeves remained at this house until she died on 22nd June 1965 and was buried in Thornbury Cemetery with her husband Percy.