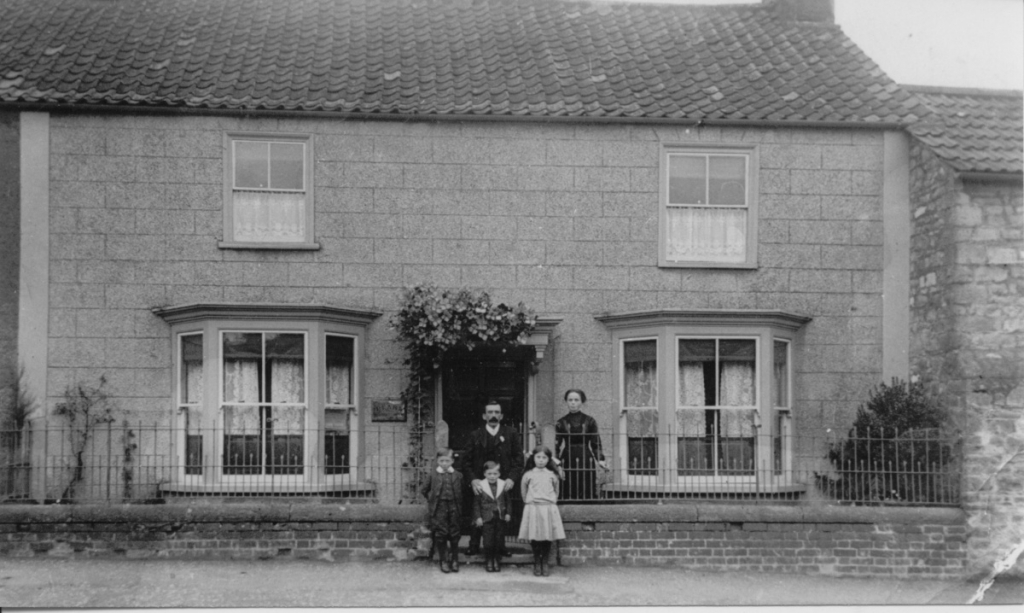 Alfred Riddiford was born on 12th December 1870 and baptised at Thornbury on 5th February 1871.  He was the son of Alfred Riddiford, an agricultural labourer from Morton and his wife, Ann.  Alfred was brought up in the family home in the area of Lower Morton and Duckhole with his siblings, Rosina, Thomas, Elizabeth, Mary and Lucy.  By 1891 Alfred had become an assurance agent.  He was still living at home with his parents in the 1901 census.  This describes him as being a school attendance officer aged 30.

In 1905 Alfred married Emily Minnie Wiltshire in Thornbury.  Emily was born on 28th June 1879, the daughter of another insurance agent, Charles Wiltshire and his wife, Rebecca who had moved to 23 Pullins Green in 1895.  Click here to read about the Wiltshire family

Alfred and Emily had three children: Winifred Blanche born in Thornbury on 26th February 1906, Alfred Charles was born on 27th January 1908 and Harold born on 11th June 1910.  The birth registration records suggest that Alfred and Emily moved around the area in this period.  Winifred was registered in Thornbury, Alfred Charles in Dursley, although he was actually born in Wotton under Edge and Harold in Kingswood near Bristol.

We don’t exactly know when Alfred and Emily settled in Horseshoe Lane.  In 1912 when Winifred started at the Council Upper School, they were living in St Mary Street.  The school record shows that Winifred had transferred from a school in Two Mile Hill, Bristol which might suggest that the family had lived in Bristol for a short time.  In 1914 when Charles started at the Council Upper School the family were living in Horseshoe Lane and all the trade directories, electoral registers and school records after that time show their address as Horseshoe Lane.  In 1918 Winifred was awarded with a free place at the Grammar School by the School Governors.  She left in July 1921 because her father needed her to assist him in his bootmaking business.  Alfred Charles also gained a scholarship to the Grammar School and he was admitted there on 17th September 1918.  He left the School on 30th July 1924 having obtained the Cambridge School Certificate.  The school records show that he intended to become a clerk to the Manager of the Quarry Works.

The photograph at the top of the page shows the family outside Myrtle Cottage.  From the ages of the children is appears as if it was taken not long after they moved there about 1914.  The sign outside the door shows ‘Pearl Insurance’.

It is interesting to note that Winifred’s school record shows her father as ‘Fred Riddiford’, the trade directory entry of 1914 lists Frederick Riddiford as an insurance agent living at Horseshoe Lane, and an entry in 1923 lists Frederick Riddiford of Horseshoe Lane as a bootmaker.  This seems to suggest that Alfred was known as ‘Frederick’ during this period.  After these entries, all other records refer to him as ‘Alfred’. Although the trade directories show Alfred as a bootmaker and repairer, we understand from a family member that he only sold shoes in his shop and he did not actually make them.  Apart from his business, he was extremely active in other ways.  He was a very active supporter of the Liberal Party and worked as sub-agent for the Thornbury and District Liberal Party at several general elections.  He became Clerk to the Parish Council (1927 – 1942), the Burial Board and Cossham Hall, Treasurer of the Ancient Order of Foresters (Court Pride of Thornbury), a Justice of the Peace and for nine years he was a Trustee for Stephens Charity.

Alfred and Emily became the owner of several houses in the immediate area as well as Myrtle Cottage.  On 13th March 1938 they bought 1, 5 and 7 Horseshoe Lane from the executors of the Ann Wise (or Wisse as she tended to be called).  They paid £400 for the 3 houses.  On 7th April 1938 they paid the Hawkins family £165 for 3 Horseshoe Lane.  For a few years, his son, Harold lived in number 1 before moving to Bristol.

Alfred also had another interesting sideline.  Many Thornburians have told us that when they were children they used to collect blackberries and rose-hips for Mr Riddiford.  Win Jenkins told us that at the end of the summer, she like so many other local children used to collect the blackberries.  Mr Riddiford was an agent for Robertsons who had a jam factory in Bristol.  There was sign up in season “blackberries wanted 4d a pound.”  Win says that in a good summer when there were more blackberries on the bushes you only got 3d.  Mr Riddiford had a garage at the side of the house and when someone knocked at his door he came out and went into the garage.  He weighed the fruit and gave you the money.  The blackberries went into barrels lined up in the garage.  Apparently the smell was wonderful.  Win told us that one day she and her friend took two pounds of blackberries to the house and had just arrived when two boys came along.  One said, “Isn’t he here?” and went to look inside the garage.  When he came out he told his friend to wait a minute before knocking on the door.  The boy then filled a bucket with blackberries and when Mr Riddiford came out, he sold the berries back to him.  One of the boys had a reputation as a bit of a bully which is probably why Win never “told on him”.

Another of Alfred’s interesting sidelines was the re-charging of batteries.  At the time before widespread use of mains electricity in Thornbury, people used to rely on batteries for illuminating their lights.  We are told that they used to take their used batteries to Alfred and pick up a charged battery.  Alfred attached the used batteries to a series of accumulators around the edge of one of his rooms.

The earliest record we have showing the house as ‘Myrtle Cottage‘ is the 1928 school record when Violet Margaret Wiltshire started school whilst she was living with Mrs Riddiford.  The 1926/27 shows the Riddifords’ address as The Myrtle Boot Supply, Horseshoe Lane.  We have been told by a family member that the name may have derived from the fact that there was a myrtle tree in the garden.

Winifred Blanche – married Kenneth W. Dewes in Thornbury Baptist Church in February 1938.  Kenneth was the only son of Mr and Mrs W. T. Dewes.  The 1939 register compiled in preparation for the war shows that Winifred was living with her parents.  The register has one other entry below Winifred but this is ‘blacked out’.  We have been told by a reliable source that this entry was for the Leonard the baby son of Winifred and Kenneth. 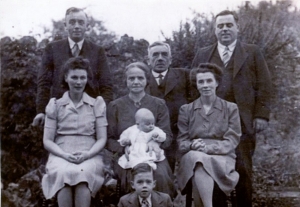 nown as Charles or Charley married Peggy Matilda King on 11th September 1937.  Peggy was born on 14th November 1915, the daughter of John and Ann King who lived in Filton.  During the War, Peggy’s parents and siblings also moved to Thornbury when the family home near the airfield at Filton was bombed.

Charles worked as a general clerk in the office at Tytherington Quarry for most of his life, then worked as a rent collector for Thornbury Rural District.  The 1939 register compiled in preparation for the war shows Charles and Peggy were living at 4 Horseshoe Lane, but the 1946 electoral register shows that they were then living in Myrtle Cottage with his parents.   He and Peggy lived in Myrtle Cottage continued there after the deaths of his parents until the house was demolished in the early 1970’s.  Charles died on 21st January 1973 aged 64 years.  Peggy still lives in Thornbury.

On the left above we have a small image of a photograph kindly given us by Len Dewes.  It shows in the back row (from left to right) Charley Riddiford, Alfred Riddiford and Harold Riddiford.  The ladies (from left to right) Peggy nee King, Emily (generally called Minnie) Riddiford, with Sandra on her knee and Winifred Dewes (nee Riddiford).  Len Dewes the son of Winifred is the little boy in the front.  Please click on it for a larger image.