The will of Arthur Taylor dated 1797 says that the house which is now Fairfield House Castle Street in Thornbury was at that time in the tenure of Susanna Robinson.

Susanna Robinson, widow of the late Colonel Beverley Robinson, took over the tenancy of what is now Fairfield House.  The memorial in St Mary’s Church implies that she lived there only as a widow.

“Sacred to the Memory of Colonel Beverley Robinson who died at Bath on the 9th day of April 1792 in the 71st year of his age and was interred in St James Church of that City.  And of Susanna, his wife who after a residence in this Town during her widowhood of 30 years died on 22nd November 1822 in the 96th year of her age and was interred in the body of this Church.  This tablet is erected as a tribute of affection by their grateful children.”

We know from Wikipedia that Beverley Robinson was born 11th January 1721 in Middlesex, Virginia.  He came from a wealthy and influential family in Virginia and his father John Robinson was at one time president of the Council of Virginia.  Beverley Robinson had married Susanna the daughter of Frederick Phillips (or Phillipse) on 7th July 1747.  Susanna was also a wealthy heiress.

On the right we have a descripti 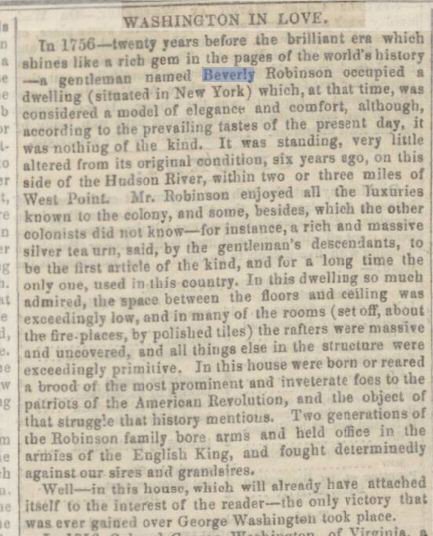 on of the home of Beverley Robinson as it was in 1756.  It was published in the Yorkshire Post.

When the war ended in November 1783 the last of the British troops left New York and Beverley’s property was confiscated and his family banished from the country.

The British Government granted Colonel Robinson £17,000 in part compensation.  Colonel and Mrs Robinson returned to England and we believe that they then made their home in Bath with their daughters, Susanna Maria and Joanna.

After the death of Sir Beverley in 1792 his widow Susanna Robinson appears to have moved to Thornbury, probably to Fairfield House.  At this point we do not know why she chose Thornbury.  It would seem that the Robinsons viewed Thornbury as their family home, even though most of them did not actually live there.  One of Susanna’s grandchildren, Margaret Ann Robinson (the daughter of Morris Robinson and his wife Margaret nee Waring), was baptised in Thornbury on 12th August 1794, although she was born in Dorset.

In the Rent Roll of 1809 Mrs Robinson was listed as a tenant of Mrs Arthur Taylor for a property which was rated at 1s 6d.  We believe that this was Fairfield House and that she was living there with her two daughters, Joanna and Susanna Maria.

In September 1812 Joanna Robinson married a widower Richard Slade who at that time was a vicar of Thornbury.
The sons of Susanna and Beverley seemed to have spent far less time in England than their sisters.  Beverley the eldest son became a law student and graduated from Columbia in New York in 1773.  He married Anna Barclay and after the war went to Nova Scotia with his wife and four children.  His fifth child was born in Nova Scotia.  Beverley died in 1816.  Anna Robinson returned to England and died in Yorkshire.

The second son Morris spent more time in England, although his army career meant he travelled extensively and he was buried at Gibraltar where he died 28th August 1815.

In 1816 Frederick Philipse Robinson GCB returned to England from Canada with his second wife Ann nee Fernyhough.  Frederick seems to have spent some time in Thornbury visiting his mother Susanna Robinson and there are still letters in existence which were written by him from Thornbury.  Frederick was not here long because he was made Governor of Tobago, a post he held from 1816 to 1828.

At this time we do not know any more about John Robinson and his wife Elizabeth nee Ludlow, except that they appeared to have lived in Canada.

Throughout this time Susanna continued to live at Fairfield House as tenant.  By 1818 the ownership of the house having passed to the surviving children of Henry and Susanna Jenner they sold it to Mrs Robinson’s fifth son William Henry Robinson for £650.  William Henry Robinson was living in London at that time with his wife Catherine nee Skinner.

Two years later William Henry Robinson bought from Joseph Parslow a strip of field at the back, for £100 which was used to enlarge the garden to its present size.  A later owner of the property, Mr de Salis believed that William Henry Robinson was responsible for the present layout of the outhouses and garden, but did not know whether any substantial alterations were made to the house itself at that time.  He felt that the front porch may have been added, as at one time there may have been an entrance from the road through the wall on the Church side of the house, with the garden door used as the front door.

Susanna Robinson died in November 1822.  The will of Susannah Robinson makes mention of the fact that her daughter Susanna Maria was not as well provided for as her other children and had been for many years the sole carer of her mother which implies that the two ladies had lived in the house on their own for much of the time.

We do not yet know exactly who occupied the house after the death of Susanna Robinson.

Although her son, William Henry bought the house, we have no records that suggest he lived in Thornbury.  We do know that a number of Susanna’s other descendants continued to have associations with Thornbury.  Her grand daughter Margaret Ann (the daughter of her son Morris) who had married Francis Shearman in 1815 was widowed in 1828.  She married William Jarman Cross in Thornbury on 29th March 1832.  We assume she had lived at Fairfield House from the time she was widowed, presumably with her daughter, another Margaret Ann Shearman, who married the solicitor Henry Farr in Thornbury on 10th July 1837.  Susanna Robinson’s daughter, Susanna Maria Robinson never married and was buried in Thornbury on July 9th 1833.  We assume she had also been living in Fairfield House.

Lady Catherine Robinson was buried at Little Marlow, Buckinghamshire, having died on 3rd July 1843.   By her will dated 27th November 1837, she left her house and premises at Thornbury to her son William Henry Robinson and his intended wife Georgiana Buckle, daughter of Admiral Buckle.

William Henry Robinson II  was married to Georgiana Buckle on 7th December 1837 in the Bath area.  Mr de Salis believed that it was possible that from that date William Henry and his wife lived at Thornbury.  However there is no indication of this in any of the later Censuses.  The 1851 Census shows that William Robinson was then living in Frenchay.  According to the 1851 Census, he had been born in Beverley in Yorkshire and he was 50 years old at that time.  Georgiana his wife was 44 years old and she was from Portsmouth.  The births of the children indicate the range of places where the family had lived.  Their first daughter Georgiana was aged 10 and born in Bath.  Henrietta aged 9 was born in Windsor in Berkshire.  Fanny aged 6 was born in Gibraltar. Elizabeth then aged 2 was born in Tobago.  The family had four servants. William Henry Robinson was in the 72nd Regiment of Infantry and in the 1841 Census he was a Captain in the Cambridge Barracks.  In 1852 when he sold the house to Edmund Lloyd, he was a Major.

Go to the other owners of this house