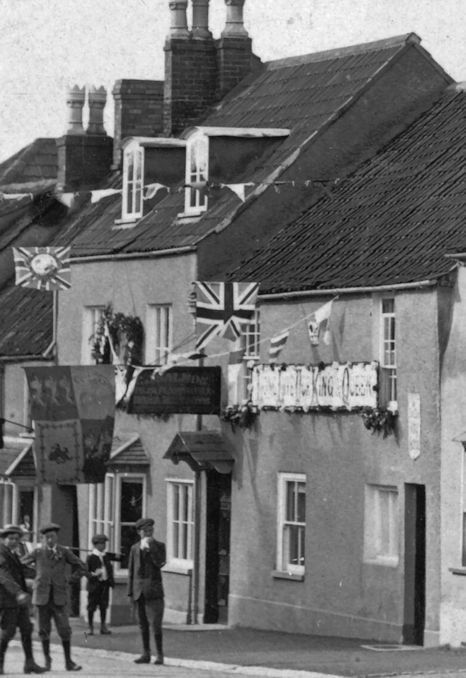 The rate book of 1910 shows that the houses now called 28 and 28A Castle Street in Thornbury were owned by Edwin John Salmon.  Edwin was baptised 3rd March 1867, the son of Richard and Caroline Salmon.  The photograph on the left shows the two houses decorated for a royal event in about 1910/11.   The sign jutting out from the building over the door says E.J. Salmon.  Below right we have an advertisement from that period.

The 1881 census shows that at the age of 14 Edwin was already a painter like his father.  Edwin married Eliza Webb on July 27th 1889 at the United Reformed Church.  Eliza was baptised on 6th May 1866, the daughter of William Webb, a labourer from Kington and his wife, Ellen.

By the time of their marriage, Edwin was a plumber and decorator and Eliza was a dressmaker.  They first lived in what is now 17 St John Street where they had at least three children: Gladys born on 3rd June 1890, Arthur Edwin born in 1893, and Harold John born on 3rd July 1898.  The 1890 rate book says that Edwin Salmon was a tenant of the house in St John Street and the 1891 census shows this house was occupied by Edwin John Salmon and his family.

In the 1901 census, the family lived at 42 Castle Street where Edwin was now in business as a house decorator.  They may have been living in Castle Street as early as 1899 or before because they 1899 Rate Book shows the name of ‘Edward’ Salmon living in a property owned by E. Salmon.  We think this was a mistake which should have read ‘Edwin’.  Read about the Salmon family in 42 Castle Street and to see a photograph of their house at this time.

By 1905 Edwin and Eliza seem to have moved to what is now 28 and 28A Castle Street which were owned by Elizabeth Eddington.  Elizabeth Eddington at the same time seems to have moved into Edwin Salmon’s house at 42 Castle Street.  This could well be because Edwin needed the larger premises to use in his trade whereas Elizabeth, being a widow, needed a smaller house.  Edwin and Eliza’s young son, Harold died on 19th June 1905.

The Gazette of November 21st 1908 shows that the estates of Thomas Eddington and Elizabeth Eddington were put up for sale and refers to the fact that the property in the occupation of ‘Edward’ Salmon was bought by him for £640.

ichard and Caroline had come to live with them, presumably in the smaller of the two houses.

The 1911 census shows Edwin John Salmon aged 44 had been married for 21 years to Eliza.  He was a house decorator and they had had five children, one of whom had died.  The remaining four children still lived at home.  Gladys aged 20 helped in the house while Arthur Edwin aged 18 was a painter.  The remaining two were much younger.  Herbert was only six years old and Dulcie three years.  Edwin’s parents, Richard and Caroline, lived in two rooms next door.  Richard aged 68 was described as an invalid.  He had been married to Caroline for 46 years. 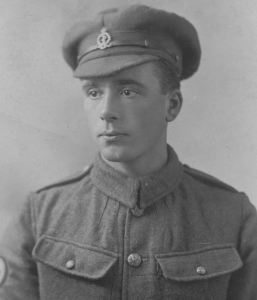 Edwin himself died on November 19th 1914.  The Gazette newspaper of 28th November reported his death and said that it took place in his office above his workshop.  He had been unwell for some time but appeared better on that day.  He was actually giving instructions to one of his workmen when a violent fit of coughing suddenly led to his death.

There was an advertisement in the South Gloucestershire chronicle which shows the determination of his widow. “Mrs E. J. Salmon having decided to continue the business of painting and house decorator is retaining the same staff and hopes by prompt attendance to all orders to receive continuance of the Patronage accorded to her late husband. Castle Street, Thornbury November 30th 1914.” The Advertisement on the right here appeared in a trade directory published by Prewett’s in 1915.

The photograph on the left is of their son Arthur Edwin Salmon in 1916 when he was in the First World War in France.  Arthur served in the RAMC. We are not sure what happened to Arthur after the War.

Dulcie Salmon appears to have married Norman Wood in the Bristol area in 1945.

Later the house was owned by Robert Mills.

Read about the Mills family.

See the other owners of this property