of The Plain, Thornbury 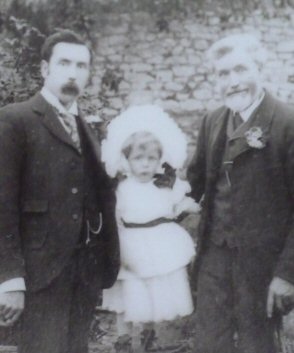 Four generations of the Mary Savery’s family have run the family business located on The Plain in Thornbury since it was started by Mark Savery in 1871.

The photo on the right shows (left to right) Edwin, young Ewart and Mark.

Mark Savery – Mark Savery was a member of an Earthcott family of blacksmiths.  Mark was born about 1831, son William Savery and Elizabeth (nee North).

According to an article written on the 100th anniversary of the firm which Mark set up in Thornbury, he was a man of energy, ambition and enthusiasm and he was a skilled engineer.  The unique Savery plough, designed by an ancestor, was so famous in his day that many were exported to Australia, and Mark had no fewer than 12 blacksmiths working at his smithy at Earthcott turning out and doing other agricultural implements and horse-shoeing work.

There were many attempts to design ploughs at that time but nearly all were doomed to failure because the angle of the ploughshare had to be delicately balanced with that of the frame of the plough otherwise it would not work properly.  It is the setting of the frame of the plough which makes the difference between success and failure because the beam is never straight on and has to compensate for the reaction of the angle of the ploughshare.  The difficulty was overcome in the Savery plough which consisted of a single beam rather than two halves bolted together.  It sold for £4 10s with 5s discount for cash.

Mark was a very religious man.  A staunch Methodist, he used to allow services to be held in a room above the forge at Earthcott.  At that time a special certificate of dispensation had to be obtained to hold services there, and a document signed by the Bishop of Gloucester was a treasured possession of Mark’s for many years.  When he was only 18 years old he made a cello out of sheet metal and this was used to accompany the singing of hymns at the Methodist services. 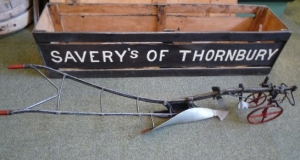 Mark also made a model of the famous plough which is currently on loan to the Thornbury Museum.  Click on the thumbnail to see a photo taken of the model of the plough.  It was said that it was typical of the man that Mark’s favourite hymn was ‘Work for the night is coming’.  The family worshipped in the room above the forge until the new chapel was built nearby in 1870.

Of their children: Edwin took over the family business and we have written about him below, Mary may have died in 1872, Frances was a boarder at a private school in Clifton run by Matilda Cotterell in the 1871 census.  On 7th January 1878, Frances married Thomas Westcombe, a grocer and the son of George Westcombe.  Maria married in 1887. In 1871 Mark moved the family to Thornbury and opened up business at 8 The Plain, in premises later occupied by Gilbert and Maurice Symes on the corner adjacent to the Royal George.  Mark’s wife, Eliza, died in June quarter 1880 aged 51.  The thumbnail on the right shows a photo of the Savery shop at 8 The Plain.  Click on the thumbnail to view a larger image.

In 1878 Mark attended a meeting at the vestry of the Parish Church and was appointed an overseer.  In 1880 he attended the meeting of the Liberals in the British Schoolroom in Thornbury.  His work was obviously prospering as in July 1880 he was advertising for a smith to help him.  In the 1881 census Mark was an ironmonger and blacksmith employing two men and one boy.  He was living at 8 The Plain.  Mark was widower aged 50 living with son, Edwin W aged 19, an ironmonger’s assistant aged 19 and daughter Maria aged 17.

Mark married Louisa Gibbons in June qtr 1884.  The 1891 census shows Mark was retired and he and Louisa had moved to live in 81 High Street.  Mark’s son, Edwin, was living at 8 The Plain with his wife, Emily C aged 22, and a general servant Mary Ford aged 18.

The 1894 and 1899 Rate Books show Mark had moved to live at 9 The Plain and he is listed as being the owner of the property.  In 1894 Mark and Edwin are also shown as renting the use of 8 The Plain and the Old Malthouse, next to the Plough in St Mary Street.  The Mercury newspaper of November 1898 reported that Mark Savery helped design the Wesleyan schoolroom in Oldbury.

By 1899 Gilbert Symes had replaced the Saverys in 8 The Plain, but they were still renting the Old Malthouse.  Edwin had moved the family business to new premises at 13 The Plain (see below).  The 1901 census also shows Mark Savery was living at 9 The Plain.  He was an ironmonger aged 70 from Alveston living with his wife, Louisa aged 64 from Oldbury and a widowed boarder, Celia Letts aged 82 from Thornbury.  Mark died on 13th July 1903 aged 73.  The 1910 Rate Book and 1911 census shows that Louisa was living at 5 Gloucester Road.  In the census she was described as living on ‘Allowance from family’.  She died in Shirehampton on 21st October 1914 aged 77.  She was buried in Thornbury Cemetery on 24th October 1914.

Edwin William Savery – Edwin was born in Eathcott on 5th August 1861.  He moved to Thornbury with his parents and helped his father in the family business at 8 The Plain.

The 1891 census shows Edwin Savery an ironmonger and machinist aged 28 from Earthcott and his wife, Emily C aged 22 from Bristol and Mary Ford, a general domestic servant aged 18 from Thornbury.  The 1890 and 1894 Rate Books show Mark and Edwin Savery as the occupants of number 8 which was owned by Samuel Wilmot.
They had at least two children: Ewart Wilkins Savery born on 12th May 1895 and Marjorie Olive born in March quarter 1899.

It was in 1898 that Ewart acquired the premises called ‘Prospect House‘ (later known by the names of ‘Sheffield House‘ and 13 The Plain).   This was previously the private residence of a doctor, E. M. Grace.  Edwin had the premises converted into a shop and he and the family lived in the two upper floors.  Edwin and his father also built a big double forge which was set up in the Gloucester Road premises at the rear of the shop and machines for making wheels and iron rims were installed.

In June 1924 Edwin’s daughter, Marjorie, married Reginald Phelps, the son of Charles Phelps, the tailor and they went to live in Cranbrook Road, Redland in Bristol.  Tragically she died at a Clifton Nursing Home on 1st July 1925.  The Gazette report of her funeral which took place at Thornbury Cemetery mentioned that Marjorie had been associated with Thornbury Tennis Club.

Ewart Savery – Ewart Wilkins Savery born on 12th May 1895.  Ewart went to the Grammar School and on leaving he joined the family business.

Ewart served in the Army during the First World War.  He is listed as receiving Christmas Gifts from Thornbury in 1916 and 1917 when his rank is shown as ‘1st A. M.’ and he was based at Doncaster at Christmas 1916 and at Grantham the following year.

With Ewart’s return to the Thornbury after the War in 1919, fresh impetus was given to the business.  With his demob pay Ewart set up a machine shop with extra extension to house a lathe, drilling machine and a grinding machine for lawn mowers (work previously done laboriously by a hand grinder).  He bought a petrol engine to provide power for driving the machine through a pulley and belts system.

Ewart gained the sub-agency through the Bristol Motor Company for Morris cars which he supplied to local farmers and others.  Later he took over the agency for Singers and he became a member of the Motor Traders Association.

The shop on The Plain had a gunpowder licence and used to sell loose powder and lead shot for use in muzzle-loading guns.  Some local persons used to take small quantities of gunpowder for medical purposes.  Lamp glasses were bought by the shipload from Czechoslovakia and these were stored in the old malthouse adjacent to the Plough Inn in St Mary Street.  Paraffin was bought in 40 gallon drums and in the early 1950’s a tank was fitted at the back of the shop, a larger tank and dispenser being added in 1963.  Ewart was the first outlet on the road between Bristol and Gloucester to install a hand-pump for pumping petrol into car tanks.  Click on the thumbnail on the right to see the range of stock carried by the shop.

Ewart was a well known bird fancier.  We have a newspaper cutting which reports on Ewart’s success at the Welsh Championship Show at Llangwith in August 1921 where he won a second prize with a Black Nun cock.  At the Thornbury Show his birds carried off most of the premier awards – in the open classes he was awarded three firsts, one third and one reserve, including the British Nun Club silver spoon award, for best bird in the show.  In the local section the successes were two firsts, one second, and four thirds, including the championship prize for best bird shown by residents.

It was in August 1943 that Ewart married Winifred Evelyn Fairchild of Olveston.  The ceremony took place at St Marys Church, Olveston.  Winifred was the second daughter of Mr & Mrs W. Fairchild of Olveston.  She had worked for Ewart in the shop as an assistant from 1930- 33 and she left to take over a newsagent and confectioners shop in Olveston.  When she married Ewart she shared in the running of the shop on The Plain.  Their son, Adrian, was born on 12th September 1945.  Ewart died in June 1971 aged 76 and Winifred died in 1991.

Adrian Savery – since Ewart’s death the shop has been run by his son, Adrian who was previously employed as a development engineer by the Motor Car Division of Rolls Royce Motors at Crewe.  He married Margaret Hawkins of Lulsgate on his parent’s silver wedding anniversary.  Adrian, like his father, grand-father and great father, has become a well-known local character.  He served on the Town Council for several years and has been involved in many other local activities.  His shop now specialises in garden machinery and building security.