William Charles Savery was born in Thornbury on 25th January 1876 and baptised on 10th March.  He was the son of John Charles Savery, a carman and his wife, Fanny.

In 1881 John and his family had been living in Chapel Street where he was employed as a drayman and Fanny was a dressmaker.

On 11th March 1895, at the age of 19 years William joined the Welsh Regiment.  He reported that he was already serving in the ‘militia’ before joining the regular army.  His attestation papers show he was a bootmaker aged 19 years at this time and that he had been apprenticed for three and half years to Charles Olds.  The Army appeared to have made use of his bootmaking skills and he received a Master Certificate in bootmaking whilst in Cawnpore in India in 1903. 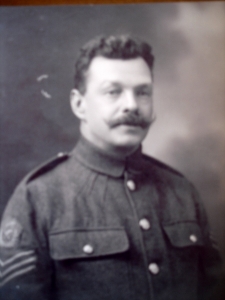 We know a lot about William at the time of his enlistment – his height was five feet and seven and one eighth inches.  His weight was 133 lbs and his chest measurement was 34 inches and 36 inches when expanded.  He had a ‘fresh’ complexion, grey eyes, brown hair and he belonged to the Church of England.  He had a cicatrix on the side of his neck.

William initially signed on for seven years plus an extra five years in the Reserve, but in 1901 he opted to extend his service to twelve years, and in 1905 to extend it further to twenty-one years.  During his long service, his rank went up and down – he was promoted Lance Corporal in May 1896, reduced to a Private at his own request in December 1896, appointed Lance Corporal in 1900 and Corporal in 1903.  In May 1906 he was appointed Lance Sergeant, but reverted to Corporal eight months later and then to Private in April 1907.  In 1916 he was appointed Acting Sergeant Shoemaker.

From October 1896, William served in India for eight and a half years.  He came home for 6 months in 1905 and then returned to India for a further 13 months.  From India he was posted in 1906 to South Africa where he spent three and a half years before returning home in March 1910.  He remained here until November 1914 when he was posted to France.  He was sent home in October 1915.  In March 1917 he was finally discharged having served the ‘second period of engagement’.  It was noted that he suffered a ‘not permanent disability’ of being gassed and he suffered from varicose veins.

Whilst in South Africa, William married Sophia Doy on 1st September 1909 at Naval Hill, Bloemfontein.  Sophia was born on 23rd October 1886.  She came back to the UK when William was posted here in 1910 and they went on to have four children here: Basil Charles born at Pembroke Dock on 21st June 1910 and died there 15th October 1910, Joyce Marjorie born on 15th April 1912 at Lambeth, Ronald William born on 16th September 1913 at Bordon, Hants, Edna Moreen born on 15th April 1917 at Thornbury and Peggy M born there on 7th February 1920.

Presumably William and Sophia moved to live at 13 St John Street Thornbury when he was discharged from the army in March 1917.  All their children attended the Council School and their records show that in 1926 the family moved to 9 Lower Bath Road.  The 1938 Electoral Register shows that they were still living in Lower Bath Road at this time.  Sophie died aged 60 and she was buried in Thornbury Cemetery on 11th February 1946.

The register compiled in 1939 in preparation for the war shows William, Sophia and Peggy M. living in 9 Lower Bath Road.  Peggy married Roy Robertson in Thornbury in 1943 and the 1946 electoral register shows that they shared the house with Peggy’s father.  In 1950  only Peggy is listed as living there and by 1954 she had moved elsewhere.

William is still listed as living in Bath Road in 1946.  He died in October 1949 aged 73 and was buried in Thornbury Cemetery on 13th October 1949.  His obituary in the Gazette mentions that he was a staunch member of the Thornbury Branch of the British Legion.  At his funeral his coffin was draped with the Union Jack and comrades from the British Legion acted as bearers.