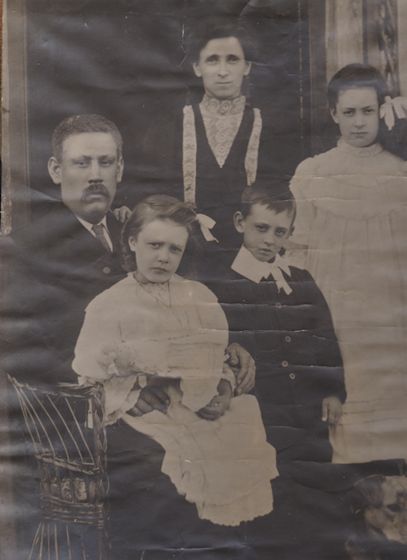 The photograph on the left shows William Short, his wife, Florence Matilda Short (nee Burchilll) and their three children, Edith Maud, Alice Elizabeth and William James jnr.  They moved to Thornbury in 1905.  William was always known by the name of ‘Bill’.

We are grateful to Michael Pearce, a great grandson of Bill Short, for allowing us to copy some of his family’s photographs.  We have added them to our collection to make an album of the Short family.  Click here to see the photos

Bill was born about 1872, the son of James Short and his wife, Mary Ann.  He was living at Engine Common, Yate in the 1881 census when James was an engine driver at the coal works.  Bill was a scholar aged eight and he had one older brother, James aged 11, a younger sister, Annie aged 6 and two young brothers, George aged 4 and John aged 2.

We have been told that the family had connections with ‘fairground people’, and that one of them was known as Cinderella Washbourne.  We found Cinderella on the census and in 1901 she was living with her grandfather, John Cole who was an ‘Amusement Proprietor’.  We are grateful to Robert John Washbourne for telling us that Ann Short, the daughter of a John Short, married Robert Washbourne on 27th August 1822.  They had 3 children, Robert, John and George.  John Washbourne had a son called John who married the daughter of John Cole.  The second John inherited the travelling fairground from John Cole senior and had a daughter called Cinderella.

Bill Short joined the Midland Railway Company in 1889 and worked for two years as a porter at Iron Acton.  The 1891 census shows Bill was a railway porter aged 18 and lodging at 32 Seymour Road, Stapleton, Bristol.  He moved to Fishponds where he worked as a porter until 12th May 1897 when he started work in the Bristol Locomotive Sheds.

In 1894 Bill married Florence Matilda Burchill in the Keynsham area.  We think Florence was born in Fishponds about 1873, the daughter of Joseph Burchill and his wife, Elizabeth.  In 1881 Joseph was a plasterer and the family were living at 10 Albert Terrace, Fishponds.  By 1891 they were living at 4 Filton Cottages, Grove Road, Stapleton.  Florence was aged 17 and she was there with her younger sisters, Ada aged 13, Sarah Jane aged 10, Alice aged 10 and Amelia aged 5.

The 1901 census shows Bill was a stoker on the railways living in 20 Winstanley Street, Barton Hill with Florence and their 2 children: Edith Maud aged 4 (born on 23rd March 1897) and Alice Elizabeth aged 4 months.  On 8th April 1902 they had a son, William James. In June 1905 he moved to Thornbury as a fireman on the railways.  Bill and Florence moved around a bit in their early years in Thornbury.  The school records and electoral registers show they were living in St Mary Street in 1905 and 1907 but from 1910 to 1913 they were in Bulls Eye Lane (in a house later known as 10 Bath Road).  The 1911 census shows the house was occupied by William Short and his wife, Florence Matilda.  ‘Bill’ was a railway engine stoker aged 38 born in Yate.  Florence was aged 37 and born in Fishponds.  They were living there with their three children: Edith Maud aged 14 born in Yate and Alice Elizabeth aged 10 and William James aged 8, both born in Bristol.

On June 13th 1920 Bill was promoted to engine driver.  He used to drive a steam train from Thornbury Station.  The photo on the right shows Bill alongside his engine at Thornbury Station.  Bill took charge of the Thornbury locomotive department following the retirement of Alfred Gill in 1929.  He continued in this capacity until his own retirement in 1937.

The 1918 electoral register shows the Shorts had moved to live in an unidentified house in Sibland.  In 1922 Bill bought a property in Sibland for £210.  This property later became known as Bay Tree Cottage.  On the 7th May 1936, Bill sold the ‘Bay Tree Cottage’ property, then subject to a tenancy of Mrs Kathleen Poole who was paying 4 shillings a week in rent, for £100, less than half what he had paid for it.  At the same auction, William also put up for sale his property called ‘Ivanhoe’ in Easton Hill Road which was then occupied by C. W. Phillips.

In 1926 at the time of their daughter, Maud’s wedding the family were living in Ivy Cottage, Sibland.

At some stage Bill moved to Hillside in Sibland, a property thought to have been built in the 1930s and he and Florence lived here for the rest of their lives.

Of Bill and Florence’s children:

Edith Maud – ‘Maud’ was born in Yate in 1897.  She started at the Thornbury Council Upper School in 1905.  On 18th January 1919 she married a Scottish man, John Geary, in Thornbury.  According to John’s military records he was born in Glasgow on 24th December 1890.  He had a very difficult childhood.  John’s father and mother died by 1899 and John and his brother, Peter, were admitted into an orphanage.  John had three other brothers, David, living in Glasgow, Edward serving in the Army and James in the Navy.  In 1906 John was one of a large number of young boys sent as child migrants to Canada.  The passenger list for the SS Sicilian in 1906 lists John as sailing from Glasgow to Halifax.   John was aged 15.

We don’t know how Maud and John got to know each other.  We assume that it was when John was serving in the Canadian Overseas Expeditionary Force fighting in the First World War.  He had enlisted on 22nd September 1914.  At that time he was working as a teamster although he had already served two years with the 41st Brockville Rifles.  His next of kin was James Geary serving on the HMS Hampshire in China.  John was described as being 5ft 4 and a half inches, with 35 inch chest and a range of 2 inches when expanded, dark complexion, blue eyes and dark hair.  He had a scar on his left hand a cross on his right hand.

The 1922 immigration document describes John as a market gardener and says he left Canada through New York in June 1919 ‘to bring his wife, Mrs E. M. Geary of Sibland, Thornbury’ back to Canada.  He was intending to settle as a farmer in Prince Albert, Saskatchewan.  He sailed from Bristol arriving at Saint John, New Brunswick on 19th April 1922.  He was aged 30. P resumably the birth of their daughter caused him and and his wife to change their minds about her sailing to Canada with him at that time

John and Maud had had a daughter, Elizabeth Florence (known as Bettie) born in March quarter 1920.  On 18th July 1924 Maud aged 27 and Elizabeth Florence aged 4 sailed from Liverpool to Montreal on SS Montcalm.  Elizabeth’s record shows she was sailing to live with her father, John Geary, at 132 Hope Street, Toronto.  She had never been in Canada before.  Her nearest relative in the UK was W. Short, Sibland, Thornbury.  Her passage was paid for by the Society for Overseas Settlement of British Women.  Further sailing records show that Edith and Bettie returned to England at least once in the next few years.

Alice Elizabeth – born in the Bristol area on 13th May 1900.  She started at the Thornbury Council Upper School in 1907.  In September qtr 1926 she married Ernest Joseph Pearce in Thornbury. Ernest was born in Lower Morton on 10th May 1902.  The 1911 census shows him living in Lower Morton with five siblings and his parents Joseph Pearce a farm labourer and his wife Sarah.  Joseph was from Littleton but his wife Sarah was from Olveston. In the 1927 electoral register Ernest and Alice were living at The Bungalow, Siblands and they were still there in 1931.  On 17th November 1934 Ernest bought the bakery, house and shop at 4 St John Street for £850.  They ran the bakery until 1937.  We have been told by a family member that the photograph on the left is of Ernest Pearce with his delivery van (which was still bearing the name of the previous owner, T. E. English).

Ernest and Alice had one son, Donald Short Pearce, who was born on 3rd October 1929.  Ernest had to give up the bakery after only a few years due to health problems caused by the night working to make the bread for the following day and the high dust levels.  On 8th February 1938 he sold the bakery to John Victor Spencer for £1550.  After leaving the bakery, the family moved to 1 Rock Street (the first house on the left going up towards the Market).  They didn’t stay there long, moving to Hillside, Siblands, by 1950, taking over the house previously occupied by Alice’s parents.  We understand from a family member that Ernest worked at Hortham Colony in Almondsbury as a security man until his death.  He died on 3rd February 1955 aged 52 years.  Alice died on 15th December 1979 aged 79 years.  They are both buried in Thornbury Cemetery.  Their son, Donald, started at the Council School in 1934 and went to the Grammar School in 1941.  When he left school he went on to work in the legal profession working in Crossman’s solicitors’ office on The Plain.

William James Short – born in the Bristol area on 18th April 1902.  He started at the Thornbury Council Upper School in 1909.  In December qtr 1926 William married Hilda Victoria Vaisey in Thornbury.  In 1927 William and Hilda were living at 7 Pullins Green.  Bill and Hilda had at least three children.  Barbara Florence Short was born on 25th November 1927.  She was admitted to the Council Infants School in 1932, but she died on 7th March 1936, just two weeks after her mother had died.  Both mother and daughter had died of scarlet fever.  The report of her funeral at the Congregational Church states that Barbara had always been very delicate.  The funeral was attended by her fellow scholars at the Council School and Congregational Sunday School.  A son, John was born on 2nd August 1929 and was admitted to the Council School in 1933.  The family is shown as living here in the school records and the 1927, 1930 and 1935 electoral registers.  Their third child who was called Gwendoline was born in 1932 but she died in the same year.

We have been told by a family member that in the 1930s William worked on the bread round for his uncle, Ernest Joseph Pearce.  We understand that Bill also worked on the railway.  Hilda died aged 37 and was buried in Thornbury Cemetery on 15th February 1936.  In 1939 young John was removed from school as the family moved to Dursley.  This probably coincided with William’s second marriage in June quarter 1939.  His new wife was Gladys Evelyn Young.  William remained in Dursley where he died on 20th December 1974 aged 72.  Gladys died on 26th July 1997 aged 95.