Leonard Smith and his wife Mary

a carrier in Thornbury 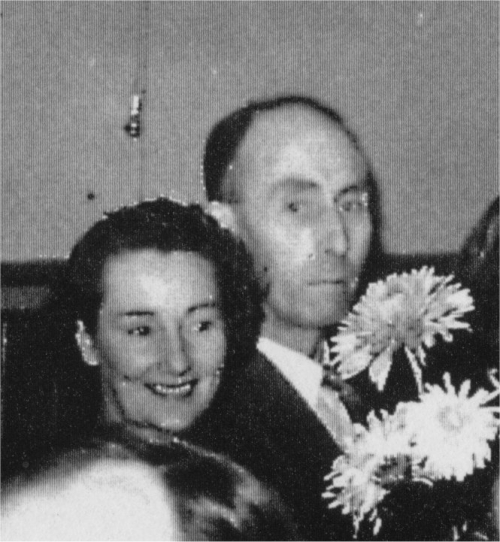 Leonard Charles Smith was born in Thornbury on 19th September 1906.  He was the son of Mr and Mrs C Smith of Chapel Farm, Morton.  Later in life, he was sometimes referred to ‘Elsie’, a nickname derived from his initials.

We have a collection of photographs of the Smith family.  Click here to see them

Leonard married Mary Louise Clutterbuck in October 1935.  The photograph on the right is of their wedding.  Mary was born in Thornbury on 12th December 1908.  Mary’s parents (William and Mary Louisa) were in the 1901 Census and at that time they kept a grocer’s shop in St Mary Street.  Mary’s father had died by the time she was married so she was given away by her brother in law Mr. A. V. Williams. Len Smith at the rear of 16 Gloucester Road

whose name was hard to read.

This is interesting because it is the first time that we saw the name “Amberley” used for the house.  The name was used throughout the occupation of the house by the Smith family.  It was discontinued when they left the house.  There are several places called Amberley in England, but we haven’t been able to find any link to any of them.  Henry Smith also doesn’t know why his parents gave the house that name.

Ken Worsley told us that Len’s father, Charlie Smith had a smallholding in the field where Stafford Crescent, Buckingham Parade and the Chantry field are now.  There were three small fields there.

Many local residents remember the family as “Smiths the carriers”.  Les King said that Len had a lorry for hauling which he parked in a yard owned by the Estate of John Williams between the Elms and the Grammar School.  The 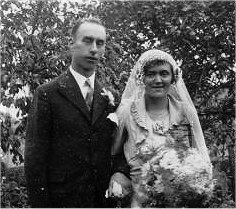 haulingway where Len drove his vehicle from the road across the pavement is still visible (directly opposite the junction of Gloucester Road and Stafford Crescent).  The wall also shows signs of where the gateway to Len’s yard/garage was filled in with new stonework.

During the War Len was an ARP Ambulance Driver.  The Smith family stayed in ‘Amberley’ throughout the war years.  Another son, John Edward Smith, was baptised on 6th July 1941.  This time the godparents were Albert Claud Warren, Leonard Charles Smith and Norah Mary Smith.  Norah had her own home in Bath, but as she came to visit every alternate weekend, she was given her own bedroom in Amberley.  The photograph below shows Henry and John Smith in the back garden

of number 16.  The house has since had a new extension for the kitchen and bathroom.

One might think that Thornbury was a quiet place in those times, but there were excitements.  A local man, George Ford, was friendly with Henry Smith and one morning Mrs Smith took George upstairs to show him the hole in the roof made by shrapnel.  The locals blame an anti-aircraft installation called ‘Purdown Percy’ for the shrapnel but that might be unfair to Percy!  Henry Smith later told us that it was an unexploded shell which was used for many years by the family as a doorstop.

On 10th August 1953 Leonard Smith bought the property at 1 Rock Street for £1250 and the family moved there.  About that time he 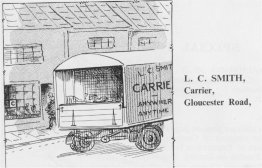 kept his wagon behind the baker’s shop in St John Street.  They were still in 1 Rock Street when the house was earmarked for demolition as part of the town’s re-development.  On 7th October 1968 Leonard sold the property to Thornbury Rural District Council for £8500.

Len appears to have owned or rented another property.  An advertisement in the Thornbury Flower Show programme for 1957 shows that he had another address.; “Central Carriers, Church Lane, Temple” in Bristol.

Leonard Smith died on May 24th 1971 aged 64 years.  He is buried in Thornbury Cemetery with his parents-in-law, William and Mary Clutterbuck.  Mary was cremated but her ashes were buried in the same grave.