Four generations of the Spill family worked as ‘delivery men’ in Thornbury.

Samuel Spill (1821 – 1875) – Samuel was baptised in Thornbury St Marys Church on 18th March 1821.  He was the son of Thomas Spill a cordwainer and his wife whose name was rather interestingly ‘Olynthyan’.

In the 1841 Census Samuel was already living away from home and was living in 51 High Street in Thornbury where he was a servant to Stephen Hignell a mealman.  He married Hester Walker the daughter of William Walker in Bedminster on 10th August 1845.  Their son Thomas was born in Thornbury in 1846.  Their daughter Elizabeth Olinthia was baptised on 27th August 1848.  Elizabeth died in 1849 aged nine months and was buried on 24th April.  A second son George Henry Spill was baptised on 4th August 1850.  The 1851 Census shows that the couple lived in Rock Street (then called ‘Back Street’).  Samuel was a grocer’s porter aged 30 and their sons Thomas and George were five years and three months respectively. They had another daughter Jane who was baptised on 7th December 1856 and a son William on 7th December 1856.

The 1861 Census shows that the family had moved to 10 Chapel Street and that they were living with three of their children; George aged 11, Jane aged 9 and William aged 5.  Samuel was 41 and working as a warehouseman.  Hester was 44 years old.  By 1871 Hester was working as a laundress with her 18 year old daughter Jane.  Samuel was still a grocer’s porter and their sons William and George aged 15 and 20 had become an errand boy and a grocer’s porter.  Sadly William died aged 16 and was buried on 28th April 1872.

Samuel Spill died aged 55 years and was buried on 11th April 1875.  The 1881 Census shows that Hester continued to live at 10 Chapel Street with her unmarried son Thomas who was 36 years old.  The 1891 Census shows that they were still living in the same house; Hester Spill was a widow aged 76 and Thomas was a general labourer aged 45 and single.  Hester died in 1896 aged 79.   The 1901 Census shows Thomas was lodging at 47 St Mary Street.

George Jessop Spill (1850 – 1904) – there is some confusion over George’s full name.  His birth was registered as George Henry Spill, baptised on 4th August 1850, the son of Samuel Spill, a labourer and his wife, Hester.  The Free BMDs website shows him as George Jessop when he married and several of his baptism records as recorded on Scribes Alcove website show him as George Jessop.  In the 1901 Census he is listed as George J. Spill.  His gravestone however shows ‘George H. Spill’.  Perhaps Jessop and Henry were his middle names and he used them both at different times.

The 1851 Census show George living with his parents in Rock Street (then called Back Street).  Samuel was working as a grocer’s porter.  By 1861 the family had moved to Chapel Street (then called Rotten Row) and they were living in the house later known as 10 Chapel Street.  In 1871 Samuel was called a warehouse man and George had found work as a grocer’s porter.

On 11th August 1872 George married Jane Hinder, the daughter of James Hinder, a labourer.  Jane was born in Hawkesbury Upton about 1845.  The 1876 Rate Book has George Spill living in two properties, one at 61 High Street, the other at 5 Upper Bath Road.  We suspect he may have moved from the former address to the latter one as that is where he was living in the 1881 Census.  The census shows that George was a labourer.  He and Jane had had 3 children: Emily aged 7, Hester Eliza aged 5 (baptised on 7th January 1877), Jane aged 3 (baptised on 4th May 1879) and Samuel aged 7 months (baptised on 7th May 1882. 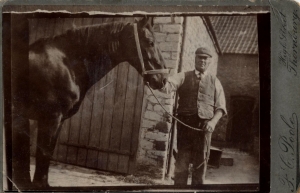 By 1891 George had become a carter.  By now they had had another son, William Henry baptised in Thornbury on 2nd March 1884.  One more son, John Jessop, was baptised on 5th July 1885 but he died a year later.  We were pleased to receive a photo from Robert Hibbert, a great grandson of George Jessop Spill.  Robert’s mother thought the photo may have been George or one of his sons.  Although we can’t be sure we believe that it is probably George, taken outside of the cart shed adjoining his home in Upper Bath Road.  The building in the background looks as if it was one of the market buildings.  We’d love to hear from anyone who can confirm this or who can tell us more information about the family.  Please click on the photo to see the full image.

The 1901 shows George and Jane still living in 5 Upper Bath Road.  George was a labourer in a grocer’s.  His son, Samuel was a grocer’s labourer and son William Henry was a blacksmith.

By 1901 Samuel had become a porter in a grocer’s.  He was the third generation of this family to take up this occupation.  We understand that Samuel started work for Councells’ grocery shop in the High Street.  He went on a wagon delivering their goods to outlying villages as far away as Charfield.

During the War Samuel applied for exemption from military service on the grounds that he was badly ruptured and that his work as postman and gardener were as essential as anything he could do of a military nature.  He was granted conditional exemption as late as February 1918 so we assume that he avoided having to join up.

Samuel is listed as a postman living in St John Street in the 1916 Prewett’s Street Directory and in Pullins Green according to the 1918 electoral register.  We suspect he took over the house at 4 Pullins Green when his sister, Hester Eliza English moved away in 1915.  He had been living in the house with James and Hester English at the time of the 1911 Census.

In 1920 Samuel married Mabel Victoria Brock and their only child, Hubert Samuel Spill was born that year.  Mabel was born in Thornbury on 2nd September 1887.  Her parents were Richard Brock, a platelayer and his wife, Flora or Florence (nee Morgan).  They lived in Grovesend when Mabel was born.  Richard had moved from his home in Devon to Thornbury to help with the building of the railway.  He stayed on when the work was finished and helped maintain the tracks. 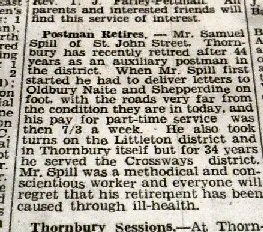 Samuel and Mabel lived in 4 Pullins Green and Samuel was still being employed as a labourer.  Samuel was a postman and for 44 years he would sort the mail which came in from Bristol in the post office before delivering it covering an area as far as Grovesend and coming back over Milbury Heath, walking all the way.  In the afternoons he cycled round the area emptying mail boxes.

The special register compiled in 1939 in preparation for the war describes Samuel as a postman and part-time gardener.

Samuel lived in Pullins Green until he died in 1950 aged 69 years.  He was buried in Thornbury Cemetery on 5th April 1950.  Mabel had bought the property from Frederick Henry Burchell on 8th May 1951.  She carried on living there after his death.  She died on 11th October 1973 aged 86 years.

Hubert Samuel Spill
Hubert started at the Council Infants School in 1925.  After school he started work in Dearings shoe shop on The Plain.  He carried on working there for about five years selling shoes in the shop and then on the travelling van selling boots, shoes and and clothing and delivering orders for people’s approval.  This travelled all round the villages and as far away as Slimbridge.

In 1940 Hubert was conscripted into the Royal Army Corps at Bovington Camp in Dorset.  He became an instructor on driving and maintaining tanks and armoured vehicles.  He later moved to Catterick awaiting posting overseas.  Here he met Gladys in a garrison church.  Although he was posted to Egypt a few weeks later he kept in touch with her and they became engaged six week after he left Catterick.  When he demobbed in 1946 they married at Gladys’s hometown of South Woodford, Essex.

They moved to a Council flat in Thornbury where Hubert worked for two months on home grown timber production and then began helping an army friend run a grocery business in Horfield.  After a couple of years, he became caretaker of the Council School at Gillingstool, the school he had attended as a child.  Hubert and Gladys were living at North Road at the time.  They had two sons, Trevor born in 1950 and Paul in 1958.

One job Hubert remembers well is that of looking after the school’s heating which was based on tortoise stoves using coke – there were 28 stoves to look after at one time!  He had to clear each fire every evening and remake it for the following morning.  He had to start work at 6.30am in the heating season and finished at 6pm, often later.  He worked at Gillingstool for about 10 years and he was then appointed caretaker at The Castle School when it moved to Park Road.  This was in 1963.  At the Castle School they lived in a caretaker’s bungalow.  He retired in 1985 when he was 65 and they For a large part of his life, Hubert had been involved with the Baptist Church Sunday School, initially as a child, then a teacher and later again as a Superintendent.  The photograph on the left shows him and his wife Gladys in 1971 at the opening of an extension to the Sunday School at the chapel.  When he retired in 1982, he had been Superintendent for 22 years.  Hubert died on 24th January 2009 aged 88.

William Henry Spill – born in 1884 William was the son of George and Jane Spill.  The 1911 Census shows William moved to live in Newport in Monmouthshire.  He was a platelayer boarding at 77 Lewis Street.  In 1913 he married Elizabeth Ann Cantelo in Newport.  He died in Newport in 1929 aged 44.