The family of Robert Stafford

Robert Stafford was born about 1876 in Stanton by Dale, Derbyshire.  In 1881 he was living in Stanton by Dale with his grandfather, William Stafford, an agricultural labourer and his wife, Mary.  There is no sign of Robert’s parents.  In 1891 Robert was a general servant working at the Seven Oaks Inn in Stanton by Dale.

By 1901 Robert had moved south to Thornbury.  In the census he was described as a ‘coachman (not domestic)’ and he was boarding with Alfred Williams in the High Street.  On 12th March 1904 Robert married Emma Skuse, the daughter of George Skuse, a labourer.  The marriage record shows Robert’s father was Richard Stafford, a carter.  Robert and Emma had at least 4 children: Florence Edith baptised on 31st October 1904, William George born on 4th January 1911 appeared in the Census of 1911 which showed that he was two months old at that time.  The census shows that Robert and Emma had had two children but that one had died.  We have not yet traced the death of Florence Edith.

Two more children followed Richard Henry born 20th June 1916 and Betty born on 25th January 1919.  The baptism records of the three youngest children show that the family were living in Castle Street and that Robert became a motor driver and then chauffeur as the car became more popular.  The 1905 Rate Book shows that it was number 38 Castle Street in which the Staffords were living.  By 1910 Robert and his family were living at Oriel Cottage 6 Castle Street.  In 1917 Robert applied for exemption from military service.  He was aged 40 at the time and we are not sure if he was successful.  The application shows he had been a chauffeur for 17 years for Dr Lionel Henry Williams of Oriel House, Castle Street. We understand the doctor may have been the first person in Thornbury to have had a car.

The electoral registers from 1927 to 1935 show Robert and Emma living in the house which later became number 10 Upper Bath Road.  By 1938 they had moved back to Oriel House, Castle Street with Dr Williams.  The register compiled in 1939 in the advent of war shows that Robert and Emma Stafford were living at Oriel Cottage with at least two sons, Williams and Richard.  Another name listed in that household has been redacted.  Initially we didn’t know what happened to Emma.  However the cemetery burial register shows that ‘Emily the wife of Robert Stafford’ was buried inThornbury on 19th July 1945.  Her death took place at St Mary Street.  The name ‘Emma’ appears in the register entry but is crossed through.  We note that the FreeBMD entry for her death also lists her as ‘Emily’.  By 1946, Robert was living on his own in 17 St Mary Street and he was still listed as living there in 1950 and 1954, although in 1954 Clifford J and Eleanor R Smith were also living there.

Of Robert and Emma’s children:

Florence Edith – Florence died in Bristol Royal Infirmary and was buried in Thornbury Cemetery on 19th October in 1910.  She was aged 5.

William George – in 1935 was said to be living in Upper Bath Road when he was one of the eye witnesses to a plane crash in a field at Crossways.  The pilot parachuted out but another airman was killed.  William was a motor transport driver.  In 1939 William married Marion Amy Bendall in Thornbury.  By 1943 William was renting out the house at 1 Rock Street when it was put up for sale at auction on 12th November.  On 7th February 1944 William bought the property at 1 Rock Street for £625.

After 1950, there is no sign of William and Marion in Thornbury.  In 1947, when William’s sister, Betty, married for a second time her address was given as ‘Benford House, Rock Street‘ so we assume that she was living with her brother at the time and that the house had been given a name.  We were puzzled by the name of ‘Benford’ until it was pointed out by Stephen Lambert (see below) that the name probably derived from the names of ‘Bendall’, the maiden name of William’s wife and “Stafford’. 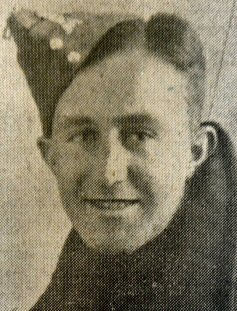 Richard (Dick) – married twice.  Richard was a painter.  His first marriage to Queenie Ethel Muriel whom he married on 11th March 1940 ended in divorce in 1946.  He married again in 1947, this time to Ruth Mary Savage of Bristol.  Mary had been employed by the GPO for several years prior to the wedding.  At that time Richard was employed by the Thornbury Picture House and the wedding reception was held in the Picture House Cafe.

We know that Richard joined the Army on his birthday in 1940 and that in 1943 he was serving in the Army Catering Corps in the Middle East when the photo on the right appeared in the Gazette.  In 1950 Richard and Mary were living in North Road.

Betty – on 19th June 1941, Betty married Patrick Joseph Gordon Hull, an aircraft engineer.  They had a daughter, Gillian Stafford Hull, born on 5th June 1942 when their address was ‘The Bungalow, Castle Street’.  Patrick died in Bristol General Hospital aged 28 and he was buried in Thornbury Cemetery on 13th February 1943.  Betty re-married on 20th September 1947.  Her second husband was Cyril Ernest Lambert, a transport driver and son of Ernest Henry Lambert, a male nurse.  She was described as a shop assistant at the time of this marriage living at Benford House, Rock Street, the home of her brother, William.  Cyril was captain of Thornbury Football Club in the 1950’s and was a youth leader for 20 years from the 1960’s.  The family initially lived in Park View Avenue, but from 1959 until their deaths Cyril and Betty lived in the flat above 5 High Street.  They had one son, Stephen born in 1949.  Cyril died in 2004 and Betty died in 2009.