The 1881 census shows that the next tenant of 20 Gloucester Road was George Stone and his wife, Eliza.  At that time George was aged 30 years and a carpenter and joiner from Bleadon in Somerset.  His wife Eliza was aged 31 and born in Hutton in Somerset.  They had been living in Thornbur for a little time as Emily aged three and Annie aged one had been born in Thornbury.  Their lodger at that time was George Kempton a baker from Bradford in Wiltshire.

In the 1871 census George had been an apprentice carpenter living at The Lane, Hutton with his parents, George, an agricultural labourer and his wife, Mary.  In 1875, George married Eliza Millard in the Axbridge area.  They moved to Thornbury from Hutton in Somerset.  The 1876 rate book shows George living in 10 Gloucester Road.  By 1880, the special drainage district rate book shows that George Stone had become a tenant of John Williams at number 20 Gloucester Road. We have looked through some of the records of the Thornbury Baptist Church to find out more about George Stone.  They suggest that George became a member of the church in 1872.  However an article in The Gazette on May 16 1936 referring to their diamond jubilee of their marriage the previous autumn mentions that ‘Coming to Thornbury from Somerset in July 1875,  Mr Stone soon sent for his bride”.  The article continues “thus began an association which, with the subsequent joining of the Baptist Church, has continued to the present time”.

George had many roles in the Church. He became a deacon and an elder of the Thornbury Baptist Church.  He was a treasurer of the church, chaired many of their meetings, was in the brass band and was heavily involved in many other ways. Although he was a deacon and elder of the main Thornbury Baptist church, for 35 years he was also in charge of the Morton Chapel.  He even found the time to render useful services to other Nonconformist churches in the region as lay preacher.

As a carpenter, George was asked to draw up a specification of the repairs done on Thornbury Baptist Church and to get them an estimate.  When a new chapel was to be built in Tytherington in 1884 he was appointed as one of the Trustees there and was given the job “to prepare the specification of the proposed new building, obtain estimates and superintend the building of the same, his expenses to be paid out of the building fund.

It seems to have been useful to have a carpenter and builder involved in the church as he had a lot of practical suggestions and ways of helping.  It was he who in 1906 proposed an improvement to the lighting in the Thornbury Baptist Church – “all burners should be fitted with incandescent lights.”  He also dealt with a more fundamental problem at a meeting of July 13th 1908.  We are told that “after discussion it was decided on the proposition of Mr Stone and seconded by Mr Boyt that a riddle be bought to riddle the ashes and avoid the present waste of cinders and coke.  The waste ashes (are) to be used in the WC and the WC to be emptied weekly by the Town Scavenger.”

Eliza was also heavily involved in the church.  The 1936 article in the Gazette refers to the fact that ‘Increased age with resulting infirmity has prevented Mrs Stone from active service for several years though she still maintains a keen interest in all the Church’s affairs.  Her husband seems to defy the ravages of time; and there is no more active member of the Church or one more regular in attendance at all its services’.

George seems to have quite a fondness for music.  The meeting of November 14th 1894 resolves that “the present harmonium belonging to the Baptist church at Thornbury, now at Morton, be sold to Mr George Stone for the sum of one pound 10 shillings, the said sum to be devoted to the Fund towards purchasing a new organ in place of the above instrument.”

The family were still at 20 Gloucester Road in Thornbury in the 1891 census.  By that time their son Arthur Stone had been born and was now nine years old.   They had another child Bertha Stone aged one year 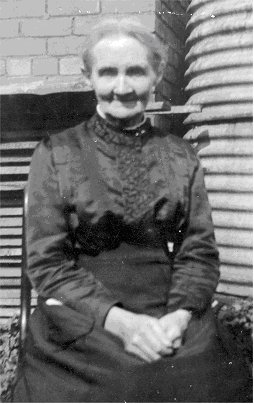 In the 1901 census, George and Eliza were living at Castle Lodge, Castle Street.  George was aged 50, a carpenter and joiner, Eliza was 51. Annie was aged 21, a teacher at Board School, Arthur was aged 19, a carpenter, and Bertha was aged 10.

The 1911 census shows George, Eliza and Bertha still living at Castle Lodge.  George was a carpenter employed on the Castle Estate.  The census shows that they had five children, two of whom had died.

The 1918 and 1921 electoral register shows George and Eliza were still living at Castle Lodge.  Later electoral registers we have seen in 1925, 1927, 1931 and 1935 show George and Eliza living in ‘Castle Street’.  Although they don’t identify the house, we know from the deeds of 38 Castle Street that George was occupying that house when it was bought by Algar Howard.

The Prewetts Directory 1913 had listed George as Secretary to the Gospel Total Abstinence Society.  Refraining from alcohol seems to have done George good.  At the time of the couple’s golden wedding in 1936 an article appeared in the Gazette reported on the tributes made to them at the annual Baptist church gathering.  It was said of George that ‘he seems to defy the ravages of time; and there is no more active member of the Church or one more regular in attendance at its services’.  Of Eliza it was said ‘increasing age with resulting infirmity has prevented Mrs Stone from active service for several years, though she still maintains a keen interest in all the Church affairs’. The couple were presented with an illuminated address, an album containing the names of some 200 subscribers and two purses.

George died aged 86 on 21st May 1937 in Castle Street.  He was buried in the Baptist Chapel churchyard in the same grave as his two sons who had pre-deceased him (see below).  George’s obituary printed in Western Daily Press on 27th May 1937 mentions that he had been a member of the first parish council and continued in office for a long time.  He had also been employed on Thornbury Castle estate for nearly 40 years.  Eliza died on 14th March 1939 aged 88 and she was buried in the same grave as her husband.

Of George and Eliza’s children,

Annie, Emily and Arthur are listed on the Baptist Sunday School roll in 1892.

Emily – born in 1877.  We can’t be sure what happened to Emily.  She may have gone into service.  In 1901 there is a’Emily Stone’ aged 23 and born in Thornbury who was a housemaid at Piers Court, Stinchcombe.  In the 1911 census the same person was a housemaid at 13 Ellenborough Park, Weston Super Mare.

Annie – born in 1879.  We found a newspaper article dated 1903 which shows that Annie Stone was a school teacher in the Council School.  The article refers to her salary being increased by £10 from £25 to £35 per annum.  In March qtr 1906 Annie married Joseph Stone Hodges in Thornbury.  A family tree on the Ancestry website shows Joseph was born in Filton in 1882, the son of Edward Hodges and his wife Mary Emma (nee Harvey).  In 1901 he was living in 63 Gloucester Road, Horfield in Bristol with his adopted parents, who appear to be an uncle and aunt.

The 1911 census shows Joseph was a cabinet maker and upholsterer.  He was living with Annie and his unmarried sister, Helen Elizabeth, at 221 Gloucester Road, Bishopston in Bristol.

Bertha – born in 1891.  Bertha was baptised on 29th March 1908 at the Thornbury Baptist Church.  She became the organist at the Baptist Church and in 1920 she married the choirmaster, Harry Phillips.  Click here the read more about the Phillips family