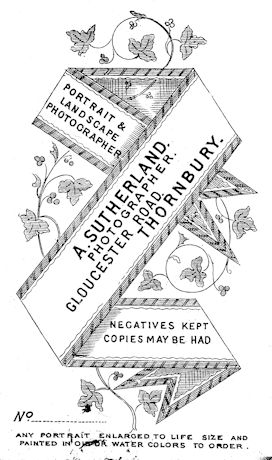 Most people living in Thornbury will probably be familiar with the photo of the Littleton Whale, stranded on the wharf by Littleton Brickworks in January 1885.  Read more about the whale

The photograph was taken by a Thornbury photographer, Alexander Sutherland.  He was believed to be Thornbury’s only professional photographer between 1877 and 1891.  He was therefore able to record one of the most famous events ever to have happened in the area.

Alexander Sutherland was born in Scotland about 1844/45.  His marriage certificate shows he was the son of James Sutherland, a clerk.  We are not sure about Alexander’s early life.  By 1861 Alexander had left home.  He appears in the 1861 census living in lodging house in Water Lane, Huddersfield.  It is fascinating to see that Alexander was a 16 year old musician and he seems to have been travelling in a group of five young musicians all aged under 17 years of age led by a Mr and Mrs McKenzie, all staying at the same house.  It is even more fascinating to see that one of the other musicians staying in the house is James Sutherland, Alexander’s brother who is recorded in the census to be only 10 years old!  It is difficult to imagine the circumstances which led to the two boys leaving home in Scotland to make a new life on the road.

By 1869, Alexander’s travels must have taken him further south to Bath, Somerset.  Here he married Emma Hibbert in St James Church on 30th December 1869.  Emma was a local girl, born in Bath in 1846.  She was baptised at St James Church on 18th March 1846 when the family were living in Corn Street, Bath.  Emma was the daughter of William Hibbert, a hairdresser and his wife, Elizabeth.  At the time of the marriage Alexander was living in Cranbrook in Kent and Emma was living in St James Parade, Bath.

We don’t know what happened to Alexander William as he doesn’t appear to be living with his parents in later censuses.  Alexander and Emma had another son, James, born in Cranbrook in 1872.  The family then appeared to move back to Scotland – at least they were in Edinburgh when their daughter Emma was born in 1874.

Alexander and Emma appear to have moved to Thornbury in the late 1870s.  Alexander wasn’t listed in the 1876 rate book, but he was advertising as a photographer in the Brown’s Trade Directory in 1879.  This advert shows his address as ‘Laburnum Cottages, Gloucester Road, Thornbury’.  This is one of the earliest references we have found to use of the term ‘Laburnum’ in relation to the row of houses.  The 1880 rate book confirms that he was then occupying 16 Gloucester Road as a tenant of George Hodges.

There are two interesting sales notices involving Alexander.  The first published on 6th November 1880 shows he was advertising for sale a dwelling house in the High Street suitable for a grocer, baker and bacon curer with good oven.  Another sales notice is published in February 1881, the only difference is that there is mention that the baker’s oven is new.   We don’t know where this property was located and why Alexander was mentioned as the contact.  None of the rate books of this period suggest he owned property in Thornbury.

The 1881 census shows the following people living at 16 Gloucester Road: Alexander Sutherland, a photgrapher aged 36 born in Edinburgh, his wife, Emma aged 35 born in Bath, their son, James a scholar aged 9 born in Cranbrook in Kent, their daughter Emma a scholar aged 7 born in Edinburgh and a visitor Eliza Hobbs who was an unmarried unemployed cook aged 49 born in Taunton.

An ever-increasing collection of photos taken by Alexander is being found.  We have a copy of one photo which may show us Alexander and his children.  It was taken at the Industrial Exhibition held in the covered tennis court of Thornbury Castle in 1885.  Read about the Exhibition.

The family were still in Gloucester Road in the 1891 census.  By this time Alexander was aged 46 and his wife Emma was 45.  Young Emma, their daughter, aged 18 was working as an assistant to her father.

Alexander appears in the Voter’s List of 1893 so we know that they remained for a year or two after the Census but cannot be sure when the family left Thornbury.  However the Rate Book of 1894 shows that the tenant’s name is Mason so it would appear he moved about this time.

Photography seems to have been very important to the Sutherland family.  Not only did Emma become a photographer’s assistant, but when we found her brother James Sutherland in the 1891 census he was boarding with a Miss Eliza Wrighton in Kerr Street, Northampton.  Here he had also become a photographer’s assistant.  By the 1901 census James was still living in Northampton, although he had married and had three children by this time, and he was working as a fully qualified photographer.

The story did not end so happily for Alexander because the 1901 census also shows that although his daughter Emma was still living with her parents and was a photographer’s assistant, she did not work for her father.  Alexander had had to give up photography and was a building caretaker in Beddington, Croyden.  We don’t know why Alexander changed his career but very powerful and poisonous chemicals were used in the early days of photography and it was a notoriously unhealthy occupation.