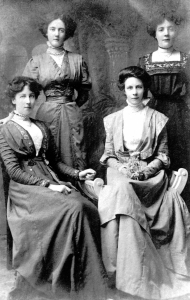 There were six daughters and the photograph above shows the four eldest girls; Ellen, Annie, Rose and Dorothy.  Please click on the image for a larger version.

In September 1917 he was returned from France to attend an Officer’s Cadet School in Oxford and he returned to the fighting in France as a 2nd Lieutenant being promoted to Lieutenant in May 1918.  During 1918 he was hospitalised on several occasions, once he was sent to back to England, to the Lord Derby Hospital, Winwick near Hulme.  Here he met the lady who was to be his second wife, Constance Furey, who was a charge-nurse there.  They married in Warrington Register Office when Percy was home on leave on 21st January 1919.  Percy was then aged 34 and Constance was 27.

Percy was finally sent back to Australia with Constance in May 1919 and he was discharged from the Army in August 1919.  They had a son, Victor, born in Australia about 1921. Constance and Victor must have returned for a visit to England as passenger lists show they sailed from London to Fremantle in 1927 on the SS Moreton Bay.  Their English address shown on the passenger list was at Kings Avenue, New Maldon in Surrey, but we know from Jack Pridham’s memoirs that they came to Thornbury for a visit.  The Electoral Rolls available on the Internet show Percy returned to being a carpenter and he and Constance lived at Tuam Street, Victoria Park, Western Australia. Percy died in July 1938.

Percy’s son, Ronald, was killed in the Second World War.  He was a pilot officer observer on a training fight which had just taken off from RAF Pershore in October 1941 when the controls were fouled when a dinghy broke loose.  The plane crashed and all seven crew members were killed.  Read Jack Pridham’s memories of his uncle Percy

The photograph on the right is of Ted and Fanny and appears to be taken at their wedding.  Click on the thumbnail for a larger photograph.   They were married in the December quarter of 1913 in Thornbury.  We have been told by his nephew, Jack Pridham, that ‘Ted’ went to Birmingham during World War One, where he and his wife, Fanny (nee Ashcroft) worked together on the trams.  The photograph on the left shows Fanny at this time.

Ted and Fanny had one son, Ewart M. Symes who was born in the Birmingham area in 1921 but he died the following year.  We were told that after the Second World War Ted and Fanny returned to Thornbury and his peace time occupation as a gardener to work for Sir Algar Howard.  The first record we have found so far is in 1946, when their address was at The Stables in Thornbury Castle.  However we believe that before this they spent a short time living at the Georgian House.  By 1950 their address was East Lodge at Thornbury Castle.  In the 1954 Electoral Roll they were living at 36 Castle Street.  This was still his address when he died in Thornbury Hospital on 16th May 1958 aged 72.  Read Jack Pridham’s memories of his uncle Ted

In the army he became an expert on malaria carrying mosquitoes.  The records of The RAMC show Nard was discharged on 20th February 1919 suffering from ‘wounds’.  His rank at that time was Quarter Master Sergeant.  On his discharge from the army he joined the Colonial Office.  In 1919 studied at the Royal College of Science (later Imperial College) for a one year diploma in entomology.  Afterwards he worked for the Colonial Office in Southern Rhodesia and then Nairobi where he continued his work on malaria carrying mosquitoes and created the Entomological Section of The Medical Research Labs.  The studies he did on the behaviour of malarial mosquitoes between 1925 and 1945 in Kenya are still acknowledged in papers on this subject.  As well as Kenya, he also worked in Mauritius, Fiji, Portugal and Brazil.  Passenger lists on the Internet also show him spending time in Trinidad, Argentina, Mozambique and New York.  On one such journey he flew from Port of Spain to Miami in 1945.

A new species of mosquito is actually named ‘Anopheles symesi’ after him.

“Nard” spent his leaves from the Colonial Service in the family home (the Georgian House).  It is interesting to note that Nard gave ‘Gloucester Road, Thornbury’ as his address on several of his sailings in the late 1920’s and 1930’s.  He maintained his Colonial routines even in Thornbury by having cold baths early every morning and pink gins every evening!  Accordong to the London Gazette in 1940 Nard was made a Lieutenant in the Royal Army Medical Corps, but we don’t know anything about where he served or what he did.

Nard’s nephew, Jack Pridham told us that Nard’s first wife was called ‘Betty’ that she usually declined to join him in Thornbury, preferring the bright lights of London.  We haven’t traced Nard’s first marriage, but note that she was called Elspeth according to various passenger lists (which show her accompanying Nard on his foreign ventures) and electoral registers in the late 1940’s when they were living in Nell Gwynn House, a large apartment complex in Chelsea.  Elspeth died in 1950 aged 60.  Nard married again – in 1952 he married Dorothy M Skeen in the Westminster area of London.  They lived in 204 Nelson House, Dolphin Square, London in the early 1950’s although she also accompanied Nard on trips to Fiji and elsewhere.

Cecil Bernard Symes was awarded the OBE as published in the London Gazette on 11th June 1942, presumably awarded for his work in the Colonial Services in Kenya.  We don’t know when Nard retired but we have an immigration document for Brazil showing he was there in 1964 as an etymologist.  His home address at that time was Yola Cottage, Winsham, Chard in Somerset.  Dorothy’s death was registered in Honiton in 1969 aged 78.  It appears that Nard moved to Sidmouth as he was living at 37 Primley Road, Sidmouth when he died on 3rd March 1976.  Read Jack Pridham’s memories of his uncle Nard