Frank Symes was born in Thornbury in 1863.  He was the youngest of the nine children of  William and Matilda Symes.

The 1881 census shows that Frank had become a saddler, living at home with his parents in St John Street (Pullins Green).   The Thornbury trade directory of 1889 suggests that Frank tried his hand as running ‘refreshment rooms’, however this seemed a short-lived enterprise as he was soon back operating as a saddler.

Frank married Augusta Hill in Thornbury in 1889.  He is shown as being a saddler at this time.  Augusta was aged 26, a cook, the daughter of Edward James Hill, a bailiff from Stapleford in Wiltshire.  We have a photograph below left of Augusta Symes in later life.

In the 1890s Frank extended his business interests becoming Secretary to the Rational Sick and Burial Association in addition to his work as saddler.  A notice of sale for 22 High Street in 1900 shows that Frank was also renting part of that property, previously occupied by Charles Fry.  He had vacated that property by 1905.

In 1901 Frank was shown as a saddler and harness maker.  By this time they had had three more children: Maud Augusta born on 24th July 1891, Frank Gilbert born on 23rd December 1893 and Archibald Harold born on 25th September 1895. 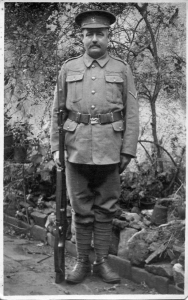 Frank Symes as a soldier

On the right is a photograph of Frank Symes in army uniform.  Please click on it to see a larger image.  We understand from the Soldiers of Gloucestershire Museum that Frank’s uniform and apparent age suggest that he belonged to one of the Volunteer Battalions, which would have been the equivalent of the Home Guard in the First World War period.

The photograph shown above right is of Frank outside his shop and is believed to have been taken about 1916.  We have another photograph below right taken from an advertisement for the business, presumably with Frank Symes and his staff outside.  The image is a thumbnail one, please click on it for a larger image.

The shop must have been very successful.  At about this time Frank’s young assistant, Herbert Henry Allen, applied for an exemption from fighting in the First World War.  The reason given for applying for the exemption was that the shop was so busy maintaining 100 farmers and 300 horses.  The application was granted in that Herbert’s call up was delayed until December 1917.

The South Gloucestershire Chronicle of July 28th 1916 carried a report of the Thornbury and District Traders’ Association which indicates just why Frank Symes did so well as a trader.  He certainly believed that he and his employees should work hard.  The Association was discussing whether the shops in Thornbury should close for the Bank Holiday.  The motion in favour of closing was carried but Frank Symes was recorded as vigorously opposing the motion as it was inappropriate to have a holiday “when the country was struggling for its very existence.” On October 13th 1916 the South Gloucestershire Chronicle had an advertisement for Frank Symes saying that he paid “top prices for apples, blackberries, mushrooms and walnuts.”  This would appear to be more of the War Effort as at that time civilians were encouraged to collect wild produce to help feed the country.

Augusta died on 16th February 1926 aged 63 years and this may have caused Frank to retire and move to live in Berkeley with his son.  Frank’s assistant, Mr William Lawrence Roach took over his business.  Frank died in Berkeley on 21st October 1931 aged 68 years.  His funeral service took place at the Parish Church in Thornbury and he was buried in the Cemetery in the same grave as Augusta.

Of Frank and Augusta’s children:

Maud – started at the National School in March 1896.  She left in 1904 to go to a private school.  We believe she married at St Saviours Church, Redland in Bristol on 8th December 1928.  Her husband was Harold Sherborne Hopkins who was a commercial traveller.

Frank Gilbert – Frank was born in Thornbury in 1894.  He began his education at the National School in 1898 and after 7 years he moved to the Grammar School on 14th January 1908.  He left at the end of the same year to become a saddler like his father.  On the 6th January 1913 Frank enlisted in the Royal Gloucester Hussars Yeomanry at Olveston.  He was described as a saddler, 5 ft 9 inches and 34 inch chest with 4″ expansion.  Frank was promoted to Corporal in August 1915 and later became a Sergeant.  His service record shows he served in Egypt, Palestine and the Dardanelles. We are grateful to Tony Cherry who during his research for his book “The History of Thornbury Castle” was able to obtain a copy of the war diary of Algar Howard of Thornbury Castle.  Howard joined up with the Oldown Troop in 1914 and his diary for 1918 says “Charles Turner and I were the only two original officers left in the regiment, but I still had half a dozen or so of the original Oldown Troop, including Sgt. Major Garrett, Sadler-Sgt. Symes, Sgt. Parsons and Farrier Major Gabb”.  It seems that Frank was still a saddler and had been lucky to survive so long with the Oldown Troop.

Frank was serving in the Jordan Valley in 1918 when he got malaria and had to hospitalised in Alexandria.  He was discharged in 1919.  His home address was in the High Street, Thornbury. Frank married Lilian B. Sims in Thornbury in 1922.  In 1931 he was a saddler in Berkeley.  Frank died in 1966 aged 72.