The youngest daughter of Charles and Jane Symes was Marjorie Iris Symes.  She was born 5th May 1903 when the family were living in what later became known as The Georgian House.  She worked in her parents house and the shop until she married Albert James Pridham in 1927.  On the left is a photograph taken at the time of their marriage.  It was taken in the garden of The Georgian House and also shows Charles and Jane Symes.

Albert James Pridham was born on 24th May 1903, the son of James Boucher Pridham who originated in Tiverton and Lilian Phelps, the daughter of John Evomy Phelps, who was technically an assistant to Doctor E M Grace but actually acted as a doctor in Thornbury.  Albert’s parents and the other children moved to Reading in 1927, the year in which he married Marjorie Symes.  Albert lost contact with most of his family, only finding many of them again when he was in his 70s.  Albert’s son, John Pridham (known as Jack), was always puzzled why his grandfather had been separated from his parents but was never able to find out why.

When Albert James Pridham and Marjorie married their first home  was at the bottom of St Mary Street opposite The Plough.  When house numbering was introduced in the 1950s the house became known as 2 St Mary Street.  The remains of their home can still be seen in the traces of the fireplace and chimney in the piece of ground to the left of the old ‘malthouse’ (which in more modern times was Green and Burton’s shop).  The ‘malthouse’ was then being used as the Thornbury Fire Station and Albert Pridham was involved for some time in the Volunteer Fire Brigade.

The family moved to The Georgian House in 1933 following the death of Marjorie’s parents. It was too big for Marjorie’s sister, Rose Symes, to manage on her own and they were able to help her out in the house, shop and garden.

Albert worked for Francis Grace.   He was a skilled electrician and was able to turn his hand to almost any kind of practical work.

Francis Grace’s enterprises were many and varied and Albert had an interesting working life.  He was chiefly involved in the Thornbury and District Electricity Co. Ltd which gradually brought electricity to every part of Thornbury.  It converted the Grain Mill (near the Anchor pub ) which had been powered by water from the mill pond to electric power.  However the T&DE Co also dealt with every aspect of electricity and Albert’s work included anything from collecting the shillings from the coin operated meters in peoples’ houses, through wiring up houses right up to repairing faults in the high tension lines that came into Thornbury.  Albert was also responsible for helping to replace the gas lamps and to install electric street lighting in Thornbury.  The lights were operated by clocks and yet another of his tasks was to wind the clocks on the lamp posts – and of course to change them when the hour had to be adjusted for Day Light Saving Time.

Through his work for Francis Grace, Albert was also involved in the Thornbury Picture House, the cinema in the High Street.  There are people in Thornbury today who can remember his wife Marjorie working at the box office while Albert was sometimes the projectionist.  We are very much indebted to our good friend Jack Pridham for giving us a lot of information about the Picture House. Jack’s mother and father were both involved in the running of the cinema and Jack spent much of his youth there.  Click here to read about Jack’s memories of the cinema

Jack Pridham has given us many interesting details about the actual building of the Georgian House.  There is a cellar beneath the two rooms on the left side of the building.  He told us that this was used for hanging hams from the beams and for wine-making.  Part of the cellar was used in WW2 as an air raid shelter with bunk beds. 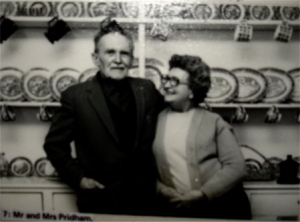 Apparently the house had one of the earliest bathrooms in Thornbury (the Pitchers also claimed to have the earliest and we don’t feel able to make any judgements in this matter!).  The water was pumped up by hand from the cistern underground that collected the rainwater to the rainwater storage tank in the roof.  This tank provided the water for the toilet and the bathroom.  In Jack’s day this was a weekly task and was done every Sunday morning.  The water was soft and good for the hair but sometimes contained the remains of rats.

It was not until the early 1950s that the house was fully connected to the mains water supply, the cistern discontinued and a tap installed in the kitchen.  Prior to this there had been only one mains water tap which was on the ground floor next to the pump.

Marjorie died on 6th March 1965 aged 61.  Albert married again in 1969 – his second wife was Bertha Taylor.  Albert died on 14th September 1986.  His death was registered in Weston Super Mare, but we note that Bertha’s address was still at 6 The Plain, Thornbury so he might have been in a nursing home or hospital in WSM at the time of his death.  Bertha’s death was registered in Bristol in 1989.

John Pridham.  Marjorie and Albert had one son, John Brian (known as Jack) born on 27th May 1929.  Jack has been the source of much information about the Symes family and the Georgian House and many of the photographs of them, for which we are very grateful.  Jack lived at The Georgian House until he left home to go to University.  He gained his PhD from Bristol University in 1955.  His travels and studies have taken him away from Thornbury but he remained very fond of the town and often revisited. See below

Jack as he was known to all in later life was a great contributor to Thornbury Roots and one of the reasons why it grew from merely being the history of one terrace of ten houses to being a website about all of Thornbury.  The creators of Thornbury Roots did not know him long but were very fond of him and we heard with sadness that he died in May 2012.

We have no way of assessing Jack’s contribution to his chosen career in bio-chemistry, apart from quoting part of a recent obituary to him.

Jack was appointed as a lecturer in the Department of Chemistry at Royal Holloway in 1957 and soon established himself as a pre-eminent plant carbohydrate biochemist.  Not only did his energy, ambition and practical skills result in frequent publications, often in Nature, he also had the foresight to establish the Department of Biochemistry at Royal Holloway in 1967.  This initiative reflected the burgeoning development of the subject and in the same year, at the age of 38, he was awarded a DSc, followed by a personal chair in 1971.  He continued to head and expand the Department, steer it though the merger with Bedford College and remained in post until 1990.  Throughout this lengthy period as Head, Jack continued to publish regularly and maintain his fundamental belief that a good knowledge of chemistry is essential for us to understand the wonders of living organisms.  This view also shaped the undergraduate curriculum within the Department and was evident after his retirement through his web site ‘ChemoPhilia’, which was ‘dedicated to counteracting misleading information about, and irrational attitudes to, chemicals’.

Jack officially retired in 1993, but continued to teach and inspire undergraduates for a number of years afterwards.  He became enthusiastically involved in science outreach, the debate over genetically modified organisms and was always eager to engage in scientific discussion and debate, whether in the SCR or the department.”

Jack had remained very fond of Thornbury and later in his life he wrote a book about his early life in the town.  It was dedicated to his father and called ‘The Handiest Man in Gloucestershire’, although it included detailed memories about other members of the family, the houses in which he had lived and other places in the Town.  Of particular interest are Jack’s memories of how Thornbury was affected by the Second World War.  We are grateful to Jack, and his wife, Mary, for allowing us to use extracts of his book which includes detailed description of places and people in Thornbury.  Click here to read Jack’s memories.