The first generation of the Symes family to live in Thornbury seems to have been William Symes and his wife Matilda.  Many of their descendants became tradespeople and shopkeepers in the town.  We have an album of photographs of the family.  Click here to see it.

William married Matilda Bishop in Shepton Mallett in June quarter 1838.  Their first child, Anthony, was born in Shepton Mallett about 1839.  We can’t find his birth in FreeBMDs but he was aged 2 when he was living with his parents in Garston Street, Shepton Mallett at the time of the 1841 Census.  The census shows William was a tailor and Matilda was a dressmaker.

William and Matilda had four more children born whilst they were living in Shepton Mallett: Mary Ann in 1841, George Felix born on 25th November 1845 and baptised in Shepton Mallett on 25th December 1845, Bernard in 1848, and Gilbert in 1851.  The 1851 Census shows William was lodging in Bristol, presumably on business.  He was staying at an ‘eating and brewing house’ run by James Allen in Temple Gate, St Mary’s Redcliffe.  Meanwhile, Matilda was back home in Garston Street where she was working as a milliner and dressmaker as well as looking after their five children with the help of a nurse.

The Symes family moved to Thornbury from Shepton Mallett in the early 1850s.  We don’t exactly when or why the family moved to Thornbury.  They were there by 29th August 1856 when their son Charles Symes was baptised in St Mary’s Church.  It is interesting that Charles was one of twins born in 1856.  His twin sister Matilda, was not baptised until 2nd May 1858.  Another son, Sidney Albert, was baptised on 2nd October 1859.

The 1859 Rate Book shows that William Symes was then living in St John Street, Thornbury, in one of the houses owned by Daniel Burchell.  These small cottages are opposite Chinese Takeaway shop in Pullins Green, probably the one now called 6 Pullins Green.

The 1861 Census shows the family still lived in Pullins Green.  William was a journeyman tailor aged 43 born in Shepton Mallett.  Matilda was aged 40 and also born there.  The two eldest children were not in the household but William and Matilda had six other children living there : George a pupil teacher aged 16, Bernard aged 12, Gilbert aged 6, Charles and Matilda both aged 5 and Sydney aged 1.

In 1871 William and Matilda were still living in the same house at 6 Pullins Green.  They had one more child since the last census; Frank born in 1863 and baptised on 1st July 1863.  Their other sons, Gilbert, an apprentice blacksmith aged 20, Charles, an apprentice cooper aged 15 and Sidney a scholar aged 11, were also still living with their parents.  The 1880 Rate Book shows that William has moved to 2 Pullins Green.  In the 1881 Census William and Matilda are still there, left with just their unmarried daughter, Matilda a dressmaker aged 25 and Frank, a saddler aged 17.  The 1885 Rate Book shows that William had moved again – this time to 15 Pullins Green.  By 1891 they had moved to a 4 room house at 32 Castle Street. William was still shown as a tailor and Matilda as a dressmaker.  Their daughter, Matilda had married John Brown, a printer, in 1884; she was however living with her parents with her son, William John Brown born in February 1885.  The family also had one lodger, Daniel Smith, a gardener from Rockhampton.

William Symes died on 3 February 1892 aged 74 years.  He was buried on February 8th of that year. Matilda, his wife, died on 11 December 1893 aged 76 years.  Both are buried in the churchyard at St Mary’s Church, Thornbury.  A “Family Friend” parish magazine of 1892 reported William Symes’s death ;

“After a lingering illness of eight months — during which time he was partially paralized —Mr. WILLIAM SYMES, of Castle Street, breathed his last, on Monday, February 2nd, at the age of 74 years. The funeral took place on Monday, February 8th, at the Parish Church.”

Of the children of William and Matilda.  We have quite a lot of photographs of and information about the four  who remained in Thornbury.  Please click on their names to read about about them;  Bernard Symes,  Gilbert Symes, Charles Symes and Frank Symes

We know rather less about four others;

Anthony Symes – was born in 1839.  By the 1861 Census he was a tailor lodging in Portishead.  He married Ann Williams in the Birmingham area in 1867 and they settled to live in Walsall and had their family there.

Mary Ann – was born in 1841.  The 1861 Census shows she had become a house maid for Edward Long, the surgeon, and was living in his house in Castle Street.  In 1865 she married Edwin Fowler, a railway man, in the Cardiff area.

George Felix – was born in 1845.  George married Margaret Hughes in the Warwick area in 1869.  The 1871 Census shows George was a schoolmaster and Margaret a schoolmistress living in Chesterfield.  Later censuses showed they moved to Wootton Bassett and then back up to Shropshire. 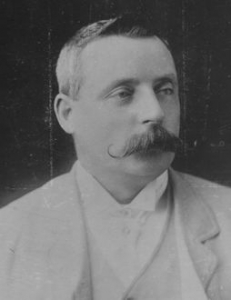 Sidney Albert Symes – was born in 1859.  Sidney had left Thornbury by the time of the 1881 Census.  We have been told he joined the Royal Engineers and fought in Egypt and the Sudan.  In the 1891 Census he was a lance corporal living in barracks in Chatham.  By the time of the Boer War he was a Company Sergeant Major.  He died in Bristol Royal Infirmary aged 50 and was buried in Thornbury Cemetery on 11th April 1910.  The Western Daily Press reported on 9th April that an inquest had been held into his death. Sidney had been accompanying William Sylvester Pegg, the landlord of the Swan Hotel on his trap which near Washingpool Hill when the horse bolted.  Both William and Sidney were thrown from the trap and incurred injuries.  Both were unconscious and taken initially to Almondsbury Hospital.  Sidney was later transferred to Bristol Royal Infirmary where he died the following day.  A witness said that the horse was ‘a hunter class, almost a thoroughbred and he had known the horse to bolt in the hunting field, but not on the road‘.  In his opinion, the horse was not suitable to drive.