Advertisement of 1798 for Fairfield by Arthur Taylor

On the 12th May 1791, Susannah Pearce sold the house which is now Fairfield House in Thornbury, for £330 to Arthur Taylor, a tanner of the Hackett.  Arthur Taylor was an executor of Edward Mathew’s will.

Bailey’s British Directory for 1784 lists Arthur Taylor with a tanner and leather works in Thornbury.

According to Mr De Salis, Arthur Taylor was, at the time, a considerable property owner in the district.  We have no detailed record of this at present although the Land Tax Records for 1800 show that the sum of £1 9s 8d was due from him which was several times more than other property owners had to pay and only surpassed by Henry Howard, the then Lord of the Manor.

“all that messuage tenement or dwelling house with the stable coach house and other buildings garden plot of ground and all other the appurtenances thereunto belonging situate lying and being in the borough of Thornbury” and so we know that the distinctive coach house was already part of the building. He also explained its provenance as that “which I purchased of and from Susannah now the wife of Henry Jenner surgeon (then Susannah Pearce spinster).”

He also left a considerable amount of land in the area surrounding Thornbury which included;

After the death of his wife this land and the annuity to be paid from it was to be given to his cousin Betty the wife of John Fewster the surgeon.  He also left 68 acres of land in Kington (including three acres called Well Close) in the manor of Thornbury to Betty Fewster and after her death to her children Ann, Elizabeth and Thomas Fewster.

It is interesting to note that Arthur Taylor may never have lived in this house.  It appears to have been let to tenants.  The advertisement at the top left of this page appeared in the Gloucester Journal of January 3rd 1798.  The will of Arthur Taylor was proved in 1802.  We believe that he was the ‘Arthur Tayler, gentleman, of Thornbury who was buried at Stone on 21st June 1802. 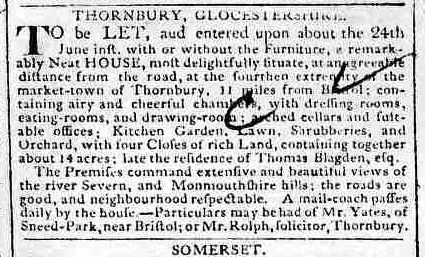 Elizabeth the “relict” of Arthur Taylor died aged 52 and was buried on 27th February 1809 at St Mary’s Church.

The land tax and rent roll records for 1809 and 1810 show that Elizabeth Taylor owned two large properties in Thornbury.   The sales notice on the right printed in the Bath Chronicle on 20th June 1811.  It refers to the one at the entrance to the town which had been let to Thomas Blagden.  This house became known as Thornbury Villa and later The Gables.  From the advertisements of the time we know that Thomas Blagden was paying £100 a year for this property.  We believe that Thomas Blagden aged 69 was buried at St Mary Redcliffe in Bristol although his name appears in the parish records of St Mary’s in Thornbury.  His will which was proved on the 31st May 1811 shows that he owned a considerable amount of property in Bristol.  This included his house in College Green, occupied by Mrs Clarke, a house in Queens Sq occupied by Miss Bullock and some warehouses.  He also left the remained the of the lease on the property he was then living in.

The other property owned by Elizabeth Taylor was the one in Castle Street which became known as Fairfield House.  By 1811 the owners of this property  were  Susannah Jenner (nee Pearce) and her husband Henry.

read about the other owners of this house