Francis Graham Taylor was born on 23rd February 1890, the son of William Taylor, a sawyer and his wife, Mary Ann.  In the 1901 Census the family were living at Alveston.  In December quarter 1919, Graham as he was known married Minnie Poulton.  Minnie was born on 17th November 1901, the daughter of Maurice John Poulton, a chimney sweep and his wife, Emily.  From about 1909, the Poulton family lived at 14 St Mary Street.

The baptism records of the children show that Graham and Minnie were living in St Mary Street in 1920 and 1921 when their first two children were born.  We understand that the family started there married life living with Minnie’s parents in 14 St Mary Street.  In 1922/3 they moved to a small cottage owned by Mr Yarnold in Gillingstool opposite the Brickworks.  In 1930 they moved to 33 St Mary Street.

Graham had served in the Forces during the First World War and following this he became an active member of the British Legion.  We understand that during the War Frank was injured and lost a couple of fingers.  The Army arranged for Frank to use a treadle sewing machine and on his release he set himself up in business as a tailor.  At first he rented a room at the back of the Exchange for his work.  He also worked at home and got a contract for working four days each week down at the Workhouse/Hospital.  Because the Workhouse did not have a sewing machine of its own, they arranged for Graham’s machine to be wheeled down to their premises each Monday and back again on Thursday.  Later on he was employed by C. P. Taylor in his business based at Porch House in Castle Street.  Minnie did ‘her bit’ as well as bringing up the children she went out working as cleaner including working as a cleaner down at the hospital.

The records of the Town Trust show that Graham was offered the tenancy of 8 St Mary Street in December 1939 for 8 shillings per week.  The house had been recently refurbished to make it habitable after proposals to demolish it and build a new house were turned down. 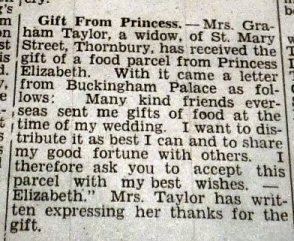 Graham died on 26th November 1946 when he suffered a heart attack when walking upstairs at his home.  He fell back and hit his head fracturing his skull.  He was aged 57 and was buried in Thornbury Cemetery on 30th November 1946.  In January 1948 the Gazette printed the article on the right showing that Princess Elizabeth had sent Minnie a food parcel.  It is interesting to see that Minnie’s sister, Doris Day, also received a food parcel.

In 1961 Frederick, Minnie, Louis and Jennifer were listed as living there.  By the 1965 register Frederick, Minnie and Louis had moved to one of the new council houses in Tyndale View and the house was demolished.  Minnie died 8th October 1977 aged 76.

Dorothy Kate – married William J Smith in Thornbury in 1940.  He worked as the manager of the Coop shop in Sharpness.

Francis Maurice – married Joyce Teague of Elberton which is where they settled to live.

Millicent Florence – on 4th October 1945 Millicent married James Mansfield who came from Plumstead.  He was serving in the Royal Navy and Millicent was in the WAAF at the time of the marriage.  They later settled to live in 4 St Mary Street.  Click here to read more

Maud Emily – married Charles Thomas Daniels, an engineer’s labourer of Ivy Cottage, Tytherington on 11th December 1948.  They lived in Gillingstool (in a cottage previously occupied by the Wheelers).  Charles went on to work as a boilerman at Leyhill Prison and later at Thornbury Hospital.  They had a son called David James Charles.

Olive Gertrude – married George William James Carter, a waste inspector from Oldbury on 25th July 1953.  Olive was described as a domestic worker at the time of her marriage.  George worked for the Waterworks and then moved to work at BAC.

Ronald John – married Nellie and they moved away from Thornbury.  In 1965 they were back in Thornbury living in Millfield, but later moved to London.

Louis Harold – we understand that Louis worked in the Saw Mills as a young lad until he developed a ‘lung disease’ which resulted in him being in a wheelchair for the rest of his life.  He is shown in the image displayed on the right.  Louis worked for Remploy in Southmead Road.