The family of Albert and Amelia Thompson

Denis Thompson – Albert and Amelia’s eldest son, Denis Wilfred Thompson, was born on 23rd August 1902.  In 1912 Denis and his brother Henry started Council Upper School in Thornbury having been educated previously in Hawkesbury Upton in Gloucestershire. 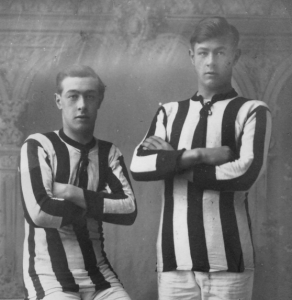 Denis on left and Henry on right

The photograph on the left shows Denis and his brother Henry in their football strip.  Denis is the boy on the left.  We have a large collection of photographs of the Thompson family, many of them kindly shown to us by Jean Thompson, now Jean Gulwell.  Click here to view these photographs

In September 1915 he started to attend Thornbury Grammar school.  He left school with the intention of becoming a baker like his father.

In 1924 Denis spent time in Manchester learning the trade from Ernest Schulbe at the confectioners school of Art in Wilmslow Road Withington.  In the early twentieth century the Germans were unsurpassed in their cake decoration and Ernest Schulbe who had emigrated to Manchester was a famous exponent of the art of icing.

Denis became a master baker and with brother Henry took over the premises in the High Street from his father.  The business in the High Street offered luncheons and teas.  Outside catering was provided for such things as wedding receptions at the Cossham Hall.

Denis married Norah Lily Walker on July 20th 1926.   She was born on 28th November 1903, the daughter of Mr and Mrs E Walker of Lower Hazel.  A thumbnail photograph of the wedding is on the right.  Click on it to see a larger version and details of other people in the photograph.  We believe that Dennis and Norah Lily Thompson may have moved into a house which is now 32 Castle Street after their marriage.

We have a declaration dated 1938 which was made by Percy Luce in connection with properties owned by the Cossham family at the top end of the High Street.  The plan accompanying the declaration shows that at that time Denis Wilfred Thompson was occupying a house owned by Edward Wise (AKA Wisse) which is now known as number 79 High Street.  We assume therefore that they had been living here since 1934 or earlier. 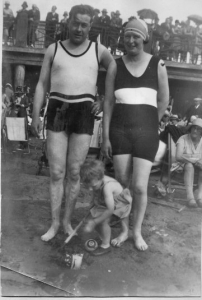 The photograph on the right is of Dennis and Norah Lily on the beach at Weston Super Mare about 1930 with their son Edward.

The three children did well at school.  In 1938 Edward left the Council School and went to Thornbury Grammar, having passed the scholarship.  His younger sister, Jean Diana Thompson followed him to the Grammar school in 1943 and Brian Dennis in 1946.

The 1950 electoral register shows Denis and Norah continued to live in 79 High Street (although it was then known a 2 High Street as until street numbering was introduced about 1953 the houses in the row were numbered from the top of the street.  By the 1954 electoral register, Denis and Norah were living at 67 High Street.  It is interesting to note that their advertisement in the Thornbury Flower Show programme of 1956 shows that they also sold cattle and poultry foods and Spillers dog food.

We have been told that Denis’s son, Edward, went to work in Uganda for the police and he came back in the 1950’s to take over the family business.  He finally sold the business to Christofer Bells in 1959.

The records of Thornbury Cricket Club included the following interesting references Dennis and his sons, written by Edgar Mervyn Grace:

E. and B. Thompson – Eddie and Brian were nephews of Henry and Jack, being the sons of Denis, their eldest brother, who strange to relate was not a cricketer.  Eddie who was always very much overweight was nevertheless a useful medium-fast bowler with a somewhat ungainly action, while Brian was a very good bat.

The other children of Albert Ernest and Amelia Thompson were;

Edna Frances Thompson was born May 5th 1909.  She started Thornbury Grammar School in 1921 and left in 1925 because she was needed to help at home.  She married George Ord then aged 27 and a carpenter on 24th May 1924.  George was the son of William Ord a miner.  Click here to read more

Henry George Thompson was born 29th April 1905.  He started at the Grammar school in 1918 and left in 1921 to become a baker.  On August 7th 1944 then aged 39 and described as a master baker and confectioner he married Grace Holpin, the daughter of William Holpin, at the United Reformed Church in Thornbury.  The probate of 1951 shows that Henry and Grace were living in the High Street at that time, although they had previously lived in Pullins Green.  Click here to read more

John Winston Thompson born 2nd February 1907 and known as “Jack.”  He started at Thornbury Grammar school in 1921 and left in 1923 to become a baker.  He married Elizabeth Brock in Llanelly in 1937.  She was a teacher at the Council School for four years before her marriage and was the daughter of Mr and Mrs G Brock of Tyesha Road Llanelly.  They later opened up the Rudgeway Stores.  We have shown him here on the left in his baker’s uniform but he is a familiar figure in many of the football photographs taken in Thornbury.  Please click on it for a larger image.  We have also included a photograph of Thornbury football team with Jack as the goalkeeper.

He is standing in the middle of the back row.  Please click on the thumbnail image on the right for a larger photograph of the team.  John Winston Thompson died 6th September 1985.  His wife Elizabeth Ann died in 2008.  Jack and Elizabeth had three children; Mary, David and Richard.

We are grateful to Les Summerfield, Thornbury Cricket Club and Mike Grace for allowing us to see the documents written by Edgar Mervyn Grace on the history of the Cricket Club.  These included the following interesting references to Jack:

J. Thompson was the youngest son of Mr. A. E. Thompson, a baker in the High Street, Jack was a keen cricketer at an early age, and loved to be taking an active part during the whole game, and was a member of the newly-formed Thornbury Cricket Club, which amalgamated with the Thornbury C. C. in 1928, and was elected Vice Captain of the 2nd XI, which he raised to a really strong side.  Quite a good bat, it was his bowling which proved more useful when he was promoted to the first XI in 1938, and during the next 9 years he took 118 wickets for an average of 15.8.  An acrobatic fielder, often bringing off a spectacular catch in the manner of a soccer goal-keeper,  Jack was also useful as an emergency wicket-keeper.  He held office as Chairman from 1948 to 1954, and during his career worked very hard for the finances and social efforts of the Club.

Betty Thompson who was born 31st October 1918.  Betty went to Thornbury Grammar School.  Apparently she was very good at sport too like the other Thompsons but this time not football and cricket but hockey and running.  She left school to work in the tea shop for her father.  She married Vic Jones from Oldbury whom she met at a local dance.  Vic was born in the Anchor at Oldbury which his parents George and Annie owned.  George was posted to North Africa, Italy and Sicily during World War Two but managed to get leave to marry Betty in December 1942.  He was a salmon fisherman on the Severn and saw the decline of that important local industry.  They had four children; June, the twins Rosemary and Geoff and Philip.  Betty and Vic produced much of their food themselves with their vegetable garden and chickens.  Betty was known for baking the local delicacy Oldbury Tarts which are made with gooseberries and a special pastry crust.  Vic Jones died in 2009.

In 2009 a local researcher, Tony Cherry, undertook a series of interviews with Jean Gulwell (the daughter of Denis Thompson) and several people who had worked for the Thompson’s bakery.  Tony has kindly agreed to us sharing his notes which give an good insight into what the bakery was like and how it operated.  Click here to read these notes