The shop on the right in the foreground of the photograph above stood on the corner of the High Street and Chapel Street.  For many Thornburians it would always be known as “Thompson’s top shop”.

Albert Ernest Thompson was born on 17th November 1873.  Like many members of the Thompson family was a baker.  We have been told that this was a tradition and as far back Ann Thompson (1795- 1880) – Albert’s great grandmother- baking was the family occupation.  Certainly Albert and his sons were very well known in Thornbury for many years in this trade and in many other aspects of Thornbury life.

The 1881 census shows that Albert’s father William Henry Thompson was not in fact a baker but a carpenter and joiner from Hawkesbury Upton in Gloucestershire.  In the census he was aged 31 living in the Back Street of Hawkesbury with his wife Sylvester aged 32 who was a dressmaker.  At that time they had sons Arthur (spelled Auther) William aged 11, Albert Ernest aged 7, Herbert Daniel aged 2 and an unnamed baby boy aged 3 days.  They had one daughter Ada Mary aged 9. By 1891 the family was living in Gladstone Cottage in Hawkesbury Upton.  Albert then aged 17 had become a baker’s apprentice.  The younger children, including his brother Daniel, were still at school.

The 1901 census shows that William and Sylvester were then living in Highfield Lane in Hawkesbury Upton.  At this point they had four children living at home and the second son, Daniel had followed the tradition and become a journeyman baker.

The eldest son, Albert, was not living with his family and sadly we have not yet been able to trace him in the 1901 census.  However we do know that Albert married Amelia Stevenson in King’s Norton in the June quarter of 1901.  Amelia was born on 22nd September 1877.  In the 1901 census Amelia Stevenson was a nurse in the home of Leah Nathan a 60 year old widow who lived in Kensington London.

We know from a Gazette profile of Albert that he had been a member of the Birmingham Trades Council for several years before moving to Thornbury.  We note that Albert and Amelia’s eldest son Denis Wilfred was born in the Birmingham area on 23rd August 1902.  Their other children were born after they returned to Hawkesbury Upton: their second son Henry George was born on 29th April 1905, John Winston (better known as ‘Jack’) followed on 2nd February 1907 and Edna Francis on 5th May 1909.

Albert Ernest Thompson was a partner in Thompson Brothers of Hawkesbury Upton with his brother Herbert Daniel Thompson until 12th September 1912 when the partnership was dissolved.  On the dissolution Albert received £188 19s 6d for plant, stock etc and £2 for excess of assets over liabilities.  The dissolution included an undertaking that Albert Ernest would not carry on a baker’s business within six miles of Hawkesbury and Daniel would not carry on a similar business within six miles of Thornbury High Street which means that at the time of the dissolution of the partnership Albert had already acquired the premises at 67 High Street. 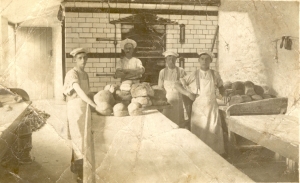 Albert had set up business in the High Street Thornbury on the corner of Chapel Street.  He took over the bakers previously operated by Charles Bennett.  We have some confirmation that the family moved to Thornbury about this time because in 1912 Denis and Henry, Albert and Amelia Thompson’s sons, started Council Upper School in Thornbury having been educated previously in Hawkesbury.

In 1914 Albert had two steam ovens installed at the bakery.  They were heated by coke.  From the correspondence about the ovens it is clear that at this time Albert was renting the premises from Mrs Minnie Ellen Hadley.  However a conveyance shows that he bought the premises from her on 24th June 1921.

A newspaper report of 16th February 1920 shows that Albert won second prize out of 64 entries at the Roxeg Confectionary Competition in Birmingham for his macaroons.  The report referred to the fact that at that time Albert had the bakery and the Cafe Refreshment House.

A second shop was opened at 19 High Street and the original premises became known as the “top shop.”  The thumbnail photograph above on the right hand side shows Thompson’s bottom shop situated two doors up from the Swan.

Albert Thompson was active on the local Council.  Family members have told us that on Christmas Day the farmers brought their turkeys in to the bakery to be cooked because they were too big for domestic ovens.  They would be charged 2/6d which would go to Liberal Party Funds.  Although he was of the Liberal political persuasion he was famous in the family for being frugal.  A report of a Council meeting which appears in the minutes book of the Thornbury Parish meetings for the meeting of Friday July 9th 1937 (in the Cossham Hall) shows this sensible attitude was continued into his public life;  “Mr A.E. Thompson proposed that all lamps be lit two weeks before the ending of Summertime and one week after the commencement of summertime as follows; from September 18th 1937 up till April 17th 1938 both dates inclusive.”  Thornbury Council under the guidance of the careful local traders never wasted money lighting lamps in the summer.

The special register compiled in 1939 in preparation for the war shows that Albert and Amelia were living at 67 High Street with Henry, Eileen and Betty.  Albert was described as a master baker and confectioner, Henry as a baker and confectioner, Eileen as a shorthand typist in a printers and Betty as a manageress of  a baker’s and confectionery shop.  Ethel M. Kingscott, a domestic worker born on 8th April 1919 was also living with the Thompson family

Albert’s involvement in local politics continued throughout his life.  We have a newspaper cutting of 20th April 1949 which describes him as the prospective candidate in local elections.

In 2009 a local researcher, Tony Cherry, undertook a series of interviews with Jean Gulwell (the daughter of Denis Thompson) and several people who had worked for the Thompson’s bakery.  Tony has kindly agreed to us sharing his notes which give an good insight into what the bakery was like and how it operated.  Click here to read these notes