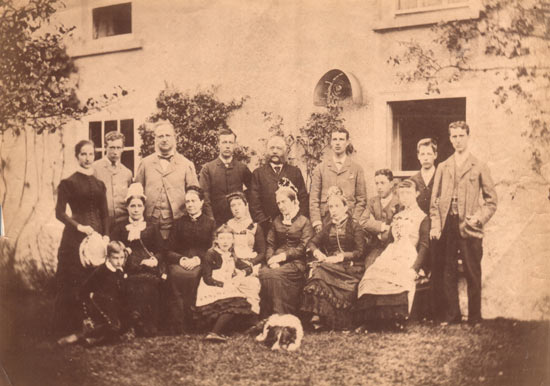 Obed Edward (centre back row) and his family

Obed was born in 1824 and baptised on 4th August 1824.  He was the son of John Thurston, gentleman and his wife, Hannah (nee Parker) who had married in Winterbourne on 10th January 1821 but were now living in Kington.

Gloucester Records Office has receipts for the education of Obed and two of his brothers.  We haven’t yet seen these documents but the extract indicates that Obed attended private school in Morton, either the Morton House Academy or Mr Moxham’s School, or both of these schools.  The thumbnails below show two pages from Obed’s notebook when he was 8 years old.  Click on them to see larger images.

The 1841 census shows Obed (although in this census the family refer to him as ‘Edward’) living at home with his parents. John was a farmer.  Obed was working as a solicitor’s clerk aged 17.

The 1851 census shows Obed was now working as a solicitor.  At the time of the census he was visiting a house in Westbury on Trym, Bristol.  On 5th June 1851 Obed married Louisa Margaret Goodall at St John the Evangelist Church in Clifton.  Louisa was the niece and adopted child of Henry and Charlotte Privett of 3 Paul Street, Kingsdown.  It was their house which Obed had been visiting at the time of the census which shows that Henry Privett was a corn traveller.

We know from the 1859 Rate Book that Obed started out by renting the property, which is now called 40 High Street, from Susan Rolph.  The 1861 census shows the house was occupied by Obed Edward Thurston, a solicitor aged 37.  He was living with his Louisa M aged 32 born in Evesham and their children: Edward J. H. aged 8, Charlotte M aged 5 and Henry P. aged 2 and a visitor Margaret J Joseph an unmarried fund holdebut r aged 34 and two servants, Sarah Shield a nurse maid aged 24 from Tytherington and Emma Roberts a house maid aged 20 from Oldbury.

On 15th October 1862 Obed bought two properties from Susannah Rolph for £650.  One of these houses was the property which he had been renting from Sarah Rolph (now known as 40 High Street, the other was the building next door (now 38 High Street).

The 1871 census shows Obed as a solicitor and landowner.  He was living with Louise Margaret and their children: Hugh Champneys aged 9, Ralph Neville aged 4 and Lawrence Thurston Thurston aged under 1.

The 1891 census shows Obed and Louisa now shared the home with Henry Privett a solicitor aged 32, and Lawrence a merchant’s clerk aged 20.

On 9th February 1893 Obed arranged for a mortgage on the two properties with William Grove Salmon Esq gent.  The properties were clearly described as ‘All that messuage wherein George Rolph and Susannah Rolph formerly dwelt afterwards in occupation of James Jones surgeon and now of said Obed Edward Thurston with outhouses stable coach house summer house garden and all appurts on west of High Street bounded by messuage next hereinafter mentioned and garden wall of the messuage formerly in occupation of David Baxter afterwards Daniel Palser since Francis Gilman afterwards Alice Ricketts and now Thomas Harney on north side thereof, by the footpath or way leading from the street into a close of ground formerly of Mrs Grace Osborne and now of W. O. Maclaine Esq commonly called The Close on south, and by said close of ground and premises of said William Osborne on the westward side.  And also all that messuage wherein Solomon Smith inhabited and Sarah Rolph afterwards dwelt and then in respective occupations by John Bevan, Eli Collings and Thomas Latter as tenant and now used as offices by said Obed Edward Thurston with the courtyard etc bounded on the north by said messuage in the occupation of Thomas Harney and on the south and west sides by the first mentioned messuage‘.  The two properties were numbered 78 and 77 on Tithe Map.  We suspect that the mortgage was arranged to fund the re-building of 38 High Street to create a modern office building for his solicitor’s premises.  This building still bears a plaque showing that the work was done in 1897.

It was around 1897 that Obed went into partnership with Lewis Jolly and the partnership continued under this name until the mid 1930’s (in the later years including Edward Darcy Burbridge under the name of Thurstons Jolly & Burbridge).

Obed died on 8th December 1899 aged 75 years.  His last will and testament had been written on 16th June 1876.  He appointed his wife, Louisa, the sole executrix and left her all his property including the property mortgaged to W. G. Salmon.

The parish magazine for January 1900 had a tribute to Obed Edward Thurston who was for many years a church warden;

‘Always in his place in the Church he loved, on Sundays, he set an example to the heads of families in the parish.  Deeply interested in the welfare of Thornbury he was always ready to do his duty as a townsman in matters of trust or responsibility, thereby setting an example to those who are unwilling to take trouble over public matters and yet are ready to critize those who do.  Connected as he had been for many years with the Charity Trusts and Educational matters of the Parish, his place will be hard to fill, and his tall upright figure and kind welcome to friend and stranger alike will be missed by many.’

The 1901 census shows Louisa was living in the house.  She was a widow aged 73 living on her own means born in Evesham.  Henry P was a solicitor aged 42, Lawrence T a farmer aged 30, daughter-in-law Susie aged 29 from Clifton, grand-daughter, Ursula F. M. aged 2 born in Colchester and three servants.

Louisa died intestate on 30th January 1902 aged 74.  The letters of administration were granted to Henry Privett Thurston on 16th November 1905.  Henry paid off the loan to the trustees and executors of W. G. Salmon who had died on 6th March 1903.

Photographs of several members of the family can be viewed in the Thurston family album accessible from the Family Albums page.   Click here to see these photos.  We are always grateful to receive more photos!