The Trayhurn family made a large impact on the St John Street area for many years.  Local people all associate the Trayhurns with the butchering business which all started with George Trayhurn.

George Trayhurn was born in Thornbury and baptised on 7 September 1856.  He was the son of James Trayhurn, a tailor and his wife Ann.  In the Census of 1861 the family lived in Horse Shoe Lane.  James was a tailor aged 30 born in Thornbury.  Ann was a tailoress aged 35, also from Thornbury.  They had five children; William aged 11, Edwin aged 8, George aged 5, Albert aged 4 and Briant aged 2.  ‘Bryant’ died in 1867 aged 7. 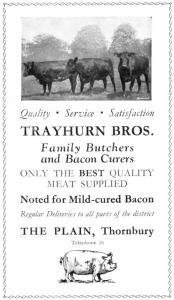 By 1871 George had left home and was working as a general servant in the house of George Walker, a butcher in St John Street.  It was here he must have acquired the taste for being a butcher, which he had become by the time he married on 7th August 1876.  George’s wife was Elizabeth Maishment, the daughter of George Maishment, a tailor.

In the census of 1881 the family lived in Silver Street.  George Trayhurn was a butcher aged 25, Elizabeth, a shopkeeper aged 26.  They had three children then – Harry Maishment Trayhurn born in 1877, George born in 1879 and Arthur born in 1881.  They were still living in Silver Street according to to the 1885 Rate Book.

George died on 19 April 1889 aged 33.  Elizabeth must have been a remarkable person as she carried on and built up George’s butchery business and managed to bring up the eight young children.  Her grandson, Don, recalled how when his grandfather died young, his grandmother started making faggots and peas etc and selling them one morning each week.  The business grew and grew and by the 1891 Census she moved from Silver Street to bigger premises on the corner of The Plain, St John Street and St Mary Street.

The 1891 census shows Elizabeth’s occupation as a butcher and grocer.  Her children were all living in the house with her Harry was 13, George 12, Arthur 10, Edward Albert 8, Reginald 6, Mabel Ellen 4, Austin Roy 2 and Charles Victor 1.  Elizabeth’s sister, Ellen Maishment aged 29, was also living there helping out as a grocer’s assistant.

In the census of 1901 Elizabeth was shown as a butcher in St John Street.  Still living with her were Albert, a butcher aged 18, Reginald, a baker aged 16, Mabel, a school teacher aged 14, and two other sons, Roy aged 12 and Victor aged 11.  We believe in 1905 and 1910 Elizabeth was living at The Court House, 2 St John Street as she is mentioned as being the occupant in a sale notice of the property.  On 8th September 1910 Elizabeth bought several properties from the trustees of Abraham Cole.  These included the butcher’s shop and the adjoining house in St Mary Street and the Court House and its adjoining Malthouse.  She paid £1050 for these properties.

Harry had married in 1897 and left home.  He was however only living a few yards away and he was assisting his mother with the butchery business.  Read about Harry Trayhurn

Elizabeth carried on the business on The Plain.   The 1911 Census shows Elizabeth, a widow aged 56 with her son, Harry a widower aged 33 and Albert aged 25.  All three were butchers.  Also living in the house were Elizabeth’s daughter, Mable Ellen, a teacher aged 24 and a grand-daughter, Frances aged 12 born in Tenby and a grandson Jack who was aged 10.  Frances and Jack were the children of Harry and his late wife.

Elizabeth is listed as a butcher in the Thornbury Directories until 1914.  The family was to suffer badly in the War.  Six of her seven sons responded to the call.

Their youngest son, Charles Victor (shown in the photo on the right) was twice rejected by the Army, but was accepted by the 8th Battalion, Royal Sussex Regiment in September 1914.  This Regiment was a Pioneer Battalion whose main responsibility was to dig trenches, but the duty often exposed them to heavy fire and occasionally they got involved in the fighting.  We have a copy of a newspaper report dated September 1915 which refers to a letter sent home by Victor – he explained that ‘Most of our work so far has been trench digging and we get a shell over us occasionally just to break the monotony.  At present we are digging behind our line under cover of night.  There is a good deal of firing at night and we get the stray shots over us as we are working‘.

He added that ‘My two worst experiences so far have been after a ten hour journey in a luggage van (as occupants), a ten miles march, which we had just after landing.  I had very little sleep the two nights previously, and I think the last five miles of the march I was half asleep.  The other was a four mile march in a very heavy thunderstorm.  After a good wetting through, we had to wade knee deep through a flood to reach our new billets‘.

Victor was serving as a Lance Corporal when he was wounded in the great advance at Trones Wood in the Battle of Somme on 14th July 1916.  An article in the South Gloucestershire Chronicle says that he lay wounded for twelve hours before being put into an ambulance.  His friend had come to attend to him but a shell killed the man and further injured Charles.  He was admitted to the Canadian hospital at Etaples in France with injuries to his thigh, knee and arm.  His mother and only sister were able to travel over to see him and speak with him before he died on 21st July 1916.  He was aged 27.  He had been a chorister and bell-ringer at St Mary’s church in Thornbury.

Prior to joining the fighting, Victor worked for the Gazette offices at Dursley and then moved to join Lamson Paragon Supply Company, a London firm of printers.

Another son, Austin Roy (known as Roy), was sent home from the fighting on more than one occasion.  We have newspaper report showing whilst he was serving with the Royal Gloucestershire Hussars in the Dardanelles in 1916 he was invalided home because of enteric fever, but after six weeks he recovered well and was able to resume duty in Egypt.  Then in 1917 whilst in Palestine he was shot through the shoulder and the injury gave him great trouble.  He was brought to England and received muscular treatment in a hospital at York.  Roy went into partnership with his brother, Harry and together they ran the butchers on The Plain under the name of ‘Trayhurn Brothers’.  On Saturday May 16th 1931 the Gazette reported on the marriage at the Olveston Wesleyan Chapel of Austin Roy Trayhurn the youngest son of the late George Trayhurn of The Plain and Elizabeth Cossham the fourth daughter of the late Mr and Mrs C J Cossham of Olveston.   Their future home was said to be in Thornbury.

In December 1937 this partnership was dissolved and Roy retired from the business.  He died on 25th October 1944 when he was living at Littledown, Haw Lane, Olveston.  A report of his funeral was printed in the Western Daily Press on 2nd November 1944.  It mentions that there was guard of honour at his funeral made up of comrades in the Home Guard.  His obituary refers to him as being a director and secretary of Trayhurns the butchers, a member of the Bristol and District Master Butchers Association, the Thornbury Meat Buying Committee, Thornbury Trader’s Association and group organiser of the Thornbury and District Road Transport Group.  He had formerly been a member of the Thornbury Gleemen Society and the Thornbury Amateur Dramatic Society.

Albert is known to have served the 12th Gloucester Regiment in France, but we know little as yet about his war experiences.  Albert married Ellen Elizabeth Horrell in the Keynsham District in 1913.  After the War Albert served as Assistant Butcher in the Merchant Navy.  The image on the right is taken from his seaman’s record dated 1919.  Albert Edward Trayhurn continued to live at Court House.  On December 4th 1926 there was an announcement in the Gazette of the death of Ellen Trayurn, Albert’s wife on November 27th of that year.  The article said that Mrs Trayhurn had been ailing for some time but died aged only 42 with “painful suddenness.”  There was a service for her at St Mary’s Church in Thornbury and she was interred at Canford Cemetery in Bristol.  In 1927 Albert’s name appears on the Electoral Roll with the address of Court House.

He remarried in the September quarter of 1927.  Albert’s second wife was Gertrude Honeywill whom he married in the Bristol area.  Gertrude and Albert Trayhurn continued to live at Court House as their names appeared in the 1931 Electoral Roll with that address.  They appear to have moved by 1935.  Albert died on 17th September 1966 aged 83.

Reginald – married Amelia House Godfrey in the Keynsham area in 1907.  During the War he suffered from gas poisoning sustained during fighting on the Western Front.  Private Trayhurn was a stretcher bearer and was attached to the Hood Battalion of the Royal Naval Division.  He received treatment in three hospitals in the fighting before being brought to England.  Reginald had received military exemption from service in the early part of the War and was not called up until May 1917.  He had been in France long before his injury.  Reginald recovered and carried on as a baker.  He had been employed as a baker up to 1910 when he purchased a ‘bread round’ for £10 and used his savings of £50 to set himself up in business.  The 1910 Rate Book shows Reginald as tenant of 19 High Street, the small shop next to the Swan.  The 1911 Census shows Reg was running a shop as a baker and confectioner.  He was aged 26 living with his wife, Amelia aged 28 from Bridgewater, their son, Henry aged 2 born in Staple Hill and a boarder, another baker, Richard Godfrey aged 60 from North Petherton.

In 1914 he was a baker and confectioner in the High Street.  He got into financial difficulties and became bankrupt in early 1917.  He blamed his problems on the health of his wife and family, losses by horses, heavy rents for his business premises and loss of trade since the War.  He explained that before the War he was paying 26 to 28 shillings per sack of flour, but for 12 months prior to his bankruptcy he was paying 60 shillings a sack and he could not get customers to pay the extra costs.  After serving in the Army, Reginald is known to have had a bakery in Raleigh Road, Bedminster.  A newspaper article dated 1920 shows that he was working as a foreman confectioner and he was applying for his bankruptcy to be discharged.  At that time he indicated he was not intending setting himself up in business again.  It appears that Reginald stayed in Bristol.  He died there on 31st October 1961.  His address at that time was 4 Banwell Road, Ashton.

The only daughter, Mabel was to make a name for herself in teaching.  Click here to read more

Elizabeth eventually died on 28th December 1930 aged 76 years.  The Western Daily Press of 2nd January 1931 reported on her funeral and said that after her husband’s death she had carried on the business for 40 years.