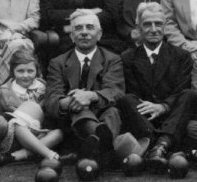 In September quarter 1884 Frank Tucker married Alice Tudor Rider in Thornbury.  Alice had been lodging with the Tucker family in the 1881 census.  She was born in Bedminster, Bristol on 18th September 1859, the daughter of Edward Rider, a brass founder and his wife, Jane.  Alice was a schoolmistress at the nearby Council School.

By 1891 Frank and Alice had moved next door to number 15 St John Street.  By this time, he and his brother, George, were calling the business “Tucker Brothers” and they had acquired use of various buildings and land around St John Street and Crispin Lane for the use of the business.  By 1891 Frank and Alice had had their first child, Elsie Gladys was born on 5th December 1885.  Their first son, Norman Frank, was born on 24th July 1891 and their second, Ronald George Edward on 15th October 1904.

The records of Thornbury Grammar School show that Ronald attended the Council School before he was admitted to the Grammar School on 20th September 1915.  He passed his Cambridge Junior Certificate in 1919 and left school in April 1921 to become a builder.

We know from the deeds of number 11 that Frank Tucker purchased that property in March 1926.  We suspect that Frank also acquired number 13 at the same time because from around this date number 13 became the office for the Tucker Brothers building business.

Frank Tucker died on 7th August 1937 aged 78 years.  Frank was an active member of Thornbury Congregational Church (which is now the United Reformed Church) and the obituary in the Gazette reports that the service was taken by Reverend Harker.  Mr Harker said that “he loved his fellow men.  Our social life and religious life is the poorer for his going.”  The service was very well attended and there were many members of the Thornbury Bowls Club present because Frank was a very enthusiastic member of that club.  Above is a photograph of Frank Tucker and his brother George at the Bowls Club.  Frank is on the far right of the photograph.

In his will, he put his property into trust for the benefit of his wife Alice.  His Trustees were Norman Frank and Ronald George Edward Tucker, builders and Frederick Thomas Sainsbury, house decorator.  Alice died on 5th October 1951 aged 92 years.  She was still living in St John Street at the time of her death.

Elsie Gladys married Frederick Thomas Sainsbury in 1910.  Frederick was the son of Joseph Sainsbury who was a house decorator living in the High Street near the Register Office.  In 1939 Frederick was listed in the trade directory as a painter in Castle Street.  Frederick died in 1956 aged about 75 years.  Elsie died in 1976 aged 90 years.  Click here to read about Frederick and Elsie

The photo on the right shows Norman aged about 11.  He was included in the photo taken of the Tucker Brothers workforce which was working on the refurbishment of Coronation House in the High Street in 1902.

The Western Daily Press of 17th February 1903 carried a report of a rather unfortunate series of accidents which led to Norman breaking his leg.  Dorothy Whitfield the daughter of George Whitfield was driving a governess cart with her two sisters and her aunt Mrs Taylor of John Street.  The governess cart was involved in a collision with a cart carrying furniture.  Mrs Taylor was rendered unconscious.  George Tucker got a cab and rushed to help Mrs Taylor but the cabdriver knocked over Norman and broke his leg.

In 1916 Norman applied for military exemption on the grounds that he was medically unfit.  The application form implies that he had already been rejected twice as unfit.  He was working for the Tucker Brothers as a carpenter at the time and living in St John Street, presumably with his parents.

On 11th June 1923 Norman married Sarah Elizabeth Ross at St Marys Church, Prestbury, Cheltenham.  Sarah was born on 15th October 1894, the second daughter of Mr 7 Mrs W. S. Ross, Prestbury Road, Cheltenham.  It was interesting to hear from a nephew of ‘Sally’s’ who told us that he had a postcard to Sally written by Norman ‘from the trenches’.  This means that he did get accepted to serve before the end of the War.  The card was addressed to Sally at Victoria House, Thornbury.  This means that she was living at the property now known as 5 High Street in Thornbury several years before their marriage.

In 1928 Norman moved to live with his uncle, George Tucker, in 12 Gloucester Road, presumably to look after him in his old age.  George died in 1931 and Norman carried on living there.  During the War, Norman was an ARP Warden.

Norman died on 7th September 1954.  Sarah continued to live in the house until 1962 when she moved to a house in Church Road which had been built by the Tucker family.  When Sarah died in January 1976 aged 81 she was buried in the same grave as Norman’s parents.

Ronald George Edward Tucker
Ron is shown in 1935 Electoral Register as living in St John Street, presumably with his parents.  Ronald was vice-chairman of the Thornbury Football Club and Captain of the second eleven of Thornbury Cricket Club.

In 1937 Ronald married Julia Ann Jones the daughter of Mr and Mrs George Jones of The Anchor at Oldbury.  Julia Jones was born on 25th December 1909.  She was a teacher at Down Hatherley School near Cheltenham and before that at Stone.

The special register compiled in 1939 in preparation for the war shows Ron and Julia were living at 1 Seven Drive Road, a house built by the Tucker family.  The register describes Ron as a builder, undertaker and coffin maker.  The electoral registers between 1946 and 1954 show them living in the same house, then called Westerleigh.  By 1958 they had moved to St Arilds, Kington.