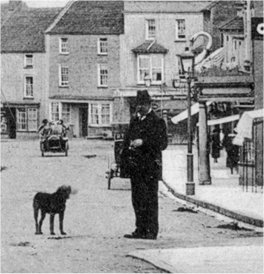 Sergeant Vaughan and his dog

James Vaughan was born about 1863 in Bredon Norton, Worcestershire.  He was the son of James and Susan Vaughan.  James senior was a shepherd in 1871 and an agricultural labourer in 1881.  James junior started his working life by becoming an agricultural labourer in 1881.  After that date, young James moved from Bredon and married Mary Ann Hobby.  Mary Ann was born on 19th February 1862 and baptised at Berkeley on 19th March 1862.  She was the daughter of Godfrey Hobby, a tailor and his wife, Ann, who were living at Ham.

In 1891 James and Mary Ann were living in Rose Cottage, Shirehampton, Bristol.  James was a policeman aged 27 and Mary Ann aged 29.  They had three children: Florence Annie aged two, Mabel Francis aged 1 and an as yet unnamed baby aged less than one month.  His mother-in-law, Ann Hobby, a widow aged 61 from Woodford, Gloucestershire was also living with them.

In 1901 the family were living in the Police Station at Chipping Sodbury.  James had become a police sergeant.  He and Mary Ann now had 4 children: Florence, Mabel, Agnes A. and Wilfred J. (aged 5).  It was sad to see the unnamed child reported in the last census didn’t survive.  Two police constables were boarding with the family.

The 1911 Census shows that he was aged 48 and living in the Police Station in the High Street in Thornbury.  At this time he had been married 23 years to his wife Annie and they had had six children, one of whom had died.  Four of the children were living in the household.  Mabel aged 21 was a draper’s assistant.  Eleanor aged 17 was a clerk at the post office.  Agnes aged 15 was not working and Wilfred aged 14 was still at school.  Annie’s widowed mother was living with the family and two police constables boarded with them.  The photograph at the top of the page shows a figure that is said to be James outside of the Police Station on the High Street.

The Gloucestershire Gazette of 18th January 1919 has an article about the retirement of Police Sergeant Vaughan.  It explains that he was stationed in Thornbury about twelve and a half years and that he came from Chipping Sodbury, where he had worked nine years.  It said that the “townspeople regret very much the loss of this kindly and considerate officer.”

In Thornbury Museum there is a copy of a testimonial signed by citizens of Thornbury and framed and presented to Sergeant Vaughan on his retirement.  It expresses their appreciation for the service James had given to the community during his twelve years here as police sergeant in the following terms.

‘We the undersigned Residents in the Thornbury District desire to place on record our appreciation of the manner in which you have carried out your responsible duties during the twelve years you have been stationed as Police Sergeant in Thornbury. Your record during the many years you have been associated with the Gloucestershire County Constabulary has been exemplary and one you can be proud of. Your work has been carried out with tact, a high sense of duty and in a courteous manner.’

James was also presented with a cheque for the sum of £76 5s.

Following his retirement from the Police Force, a local resident Miss Higgins informed us James and his wife, Mary Ann Vaughan moved to live at 5 Pullins Green in the 1920s.  The electoral registers show that they lived there from about 1925 through to 1930.  The 1926 Rate Book shows that James was both the owner and occupant of the house.

James died in October 1930 aged 66 years.  The Western Daily Press of October 9th 1930 reported on his funeral which took place in Thornbury and was attended by his colleagues from all over the country.  Following his death, Mary Ann moved to live with their daughter, Agnes and her husband Cecil Cook, at 2 High Street.  Mary Ann died in February 1945 aged 82 years.  Both are buried in Thornbury Cemetery.

Of the children, Agnes Amelia married Cecil Cook  in 1923 and they settled in 2 High Street where Cecil was a grocer.