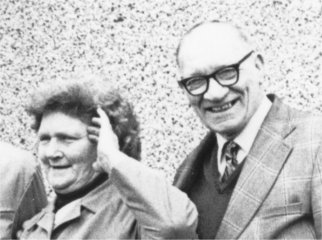 Reginald Walter Edward Vowles was born in Filton on 13th August 1911.   He was the son of Joseph Vowles, a railway platelayer and his wife, Annie (nee Bracey).  At the time of the 1911 Census (before Reg was born) the family were living at 6 Victoria Park, Filton.

In his early years Reg worked for Bristol Tramways Company, and he later moved to become an engineer inspector at BAC.

Reg married Edna Mary King from Filton on 27th December 1937.  Edna was born on 2nd September 1917, the daughter of John King and his wife, Annie (nee Harris).  Reg and Edna lived in 221 Gloucester Road (North), a house near the end of the airfield runway at Filton.  During the early years of the War they were bombed out and the moved to Thornbury where several of Edna’s siblings were already living.  At first they rented some rooms from the Liddiatts in Silver Street.  Their first house was opposite the Market gates – a house which became known as 8 Upper Bath Road when numbering was introduced in the early 50s.  Their two children, John and Helen, were born whilst they were living here.  These houses were demolished in the late 60s and replaced by the Council flats known as Streamleaze Court.

We understand that whilst they were living in this area, Reg used the old farm at Polterbrook (which used to stand at the bottom of Daggs allotments) to keep horses and pigs.  From the house in Upper Bath Road, the family moved across the road to 11 Rock Street where they lived from the early 1950s to early 1960.  They then moved to number 12 Gloucester Road. 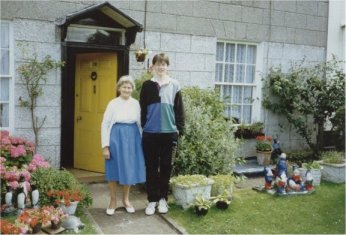 Both Reg and Edna were extremely well known and popular people in the local community.  Reg was very active and played regularly for Thornbury AFC.  He was a goalkeeper and Edna seemed to have become involved in washing kits and providing meals.  We heard one story about the footballing days, which we may have remembered incorrectly so anyone who has a fuller account is welcome to contact us with the details.  The version we remember is that Thornbury Town Club included a young German man who was an excellent footballer but who was a controversial choice because he was an ex-prisoner of war who decided to remain in the area.  A game against Yate became unpleasant because of the anti-German feeling at that time.  A fight ensued.  As we understand it, Reg received one of his few footballing injuries when he hurt his hand defending the German who was being attacked by the opposition.

After his retirement, Reg kept busy by helping out at the garage run by Dick Shipp which was located opposite his home.  He died on 2nd January 1988 aged 76 years.

Reg and Edna always loved children and took groups of them camping and were involved in other activities with youngsters.  They also created a front garden full of little colourful gnomes.  This held a great fascination for all the small children walking past the house to go to the shops.  They would stop to have a look at the wonderful display.  The photo on the right shows Edna and a neighbour, James Hall, in her garden with some of her gnomes, which had just been painted in patriotic colours in honour of the Queen’s Jubilee.

We know that many local people will have photos and memories of Reg and Edna and we would love to include them on this site. Please don’t hesitate to contact us if you can help.

Read about the history of the house
Toggle Sliding Bar Area