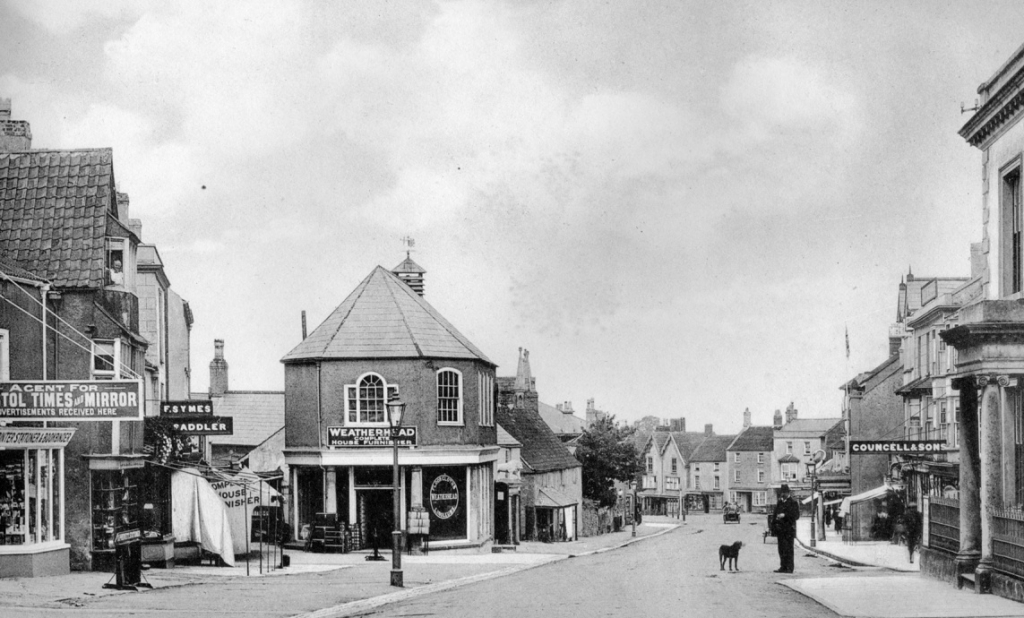 John Weatherhead and his wife Emily came to Thornbury in 1871 after living in London for several years.  Initially John was a shoemaker but he and Emily went on to start the draper’s business in the High Street which was later expanded to incorporate the old Town Hall and Toll House and it became an integral part of the Thornbury scene for many years.

John was born about 1838 in Hemel Hemstead.  He was the son of Thomas Weatherhead, a shoemaker and his wife, Sophia who were living in the High Street, Hemel Hemstead in the 1841 census.  The 1851 census shows John was still a scholar; his father was a cordwainer employing six men.

In 1863 John married Emily Halford in Ross and in 1871 census John and Emily were living at Broad Street, Ross.  John was described as a shoe manufacturer aged 32 and Emily was aged 30 born in Ross.  They had two children: Emily aged 4 and Ernest Percy aged 10 months, both born in London.  They had one other child, Walter William Weatherhead who was born on 5th November 1864 and baptised in St Luke’s Church, Old Street, Finsbury Park, London on 4th December 1864.  We don’t know where little Walter was living at the time of the census and he appeared to have stayed in London – he was a draper’s apprentice there in 1881 and a draper’s assistant in 1891.

We spent a lot of time trying to find out about John’s earlier life in Thornbury.  There was no sign of John Weatherhead in the 1881 census or under any similar names and he was completely missing from the rate books before 1885 and that only showed he owned 36 High Street, but was not living there.  Our problem was compounded by one source which showed that John Weatherhead had bought two properties in the High Street in 1883, yet a newspaper sale notice and a report which showed that it was John Marshall who had been living in one of the properties and bought them both and John Marshall is shown as the owner of these two properties in the 1885 Rate Book.  The 1890 Rate Book however shows that John Weatherhead was the owner of one property that was occupied by John Marshall and William Yarnold was owner and occupier of the other house.

When we eventually tracked down the 1881 census record it went some way to explaining the situation, although it highlighted another mystery.  The 1881 census shows that the property we now know as 14 High Street was occupied by John Marshall, a general draper aged 44 from Hemel Hempstead, Emily Marshall aged 42 born in Ross and their children: Emily S Marshall aged 14 born in Bow, Surrey, Ernest P. Marshall aged 10 born in Southwark, Surrey, Edith M. A. Marshall aged 9 born in Thornbury and John E Marshall aged 7 born in Thornbury.  So John Marshall and John Weatherhead were the same person!  But why did the two names appear in so many sources, and one (the 1890 Rate Book) shows both names associated with the same property.

The 1891 census shows John and Emily Weatherhead ensconced at 14 High Street.  Interestingly it is Emily who is shown as a draper and an employer.  John is shown with no occupation which may be a mistake or may indicate that he was in poor health.  John died on 12th August 1891 aged 54.  At the time of the 1891 census they were living there with Fanny E aged 15, Wallace H aged 13 and Ethel R aged 10, all born in Thornbury and three draper’s assistants and one domestic servant.

In 1895 Emily retired as a draper and moved away from Thornbury leaving the business to Ernest Percy.  In the 1901 census she was living in 21 Chester Road, Kidderminster with her two daughters, Edith and Fanny.  Edith had a business as a general draper, but Fanny had ‘no occupation’.

Emily wrote her last will on 7th October 1909.  She died in Kidderminster on 13th December 1916 aged 78.  She was buried in the same grave as her husband near the entrance to Thornbury St Marys Church.  In her will she appointed her two sons, Walter William and Ernest Percy and her son-in-law, George Reuben Prickett, to be her executors and trustees.  After making some pecuniary bequests she arranged for the income from her property in the High Street and the two houses at 6 and 8 St John Street to benefit her daughter, Fanny Eleanor Weatherhead.  After Fanny’s death, the property was to be sold and the profits shared.

We have written about Ernest Percy Weatherhead below.  John and Emily’s other children appear to have little further connection with Thornbury:

Ernest Percy Weatherhead – Ernest took over the business after his father had died and his mother moved away to live in Kidderminster in 1895.  Under his leadership the business really expanded.  In 1900 he was also renting one part of the shop previously occupied by Charles Fry, the saddler (now known as 22 High Street).  In 1909 Ernest undertook a major extension of the existing shop.  By 1910 he had bought the Market Hall and the old Toll House from Sir Edward Stafford Howard and incorporated these into his premises which appeared to be given the name of ‘Commerce House’.  Ernest had also purchased The Castle Temperance Hotel and the stables in the rear of the hotel and the house and shop at 2 The Plain.  The 1925 Valuation list and 1926 Rate Books show Ernest was renting the shop at 31 High Street. During the First World War Ernest was a member of the 1st Volunteer Battalion of the Gloucestershire Regiment.  The Gazette of September 1916 listed him as a deputy commander of Section 4.  The image on the right is taken from a photo of the volunteers and the name of ‘Weatherhead’ is marked against this image.

Ernest was born in Southwark in London on 6th May 1870.  He was admitted to the Thornbury Grammar School on 25th July 1881.  Ernest married Georgina Maria Bonham in St Neots in 1895.  The 1901 census shows them in the High Street.  Ernest was a draper aged 30 living with his wife, Georgina aged 29 from Shenley, Bucks and their son, Stanley who was aged 3 born in Thornbury.  A daughter, Gladys Mary was born in 1903.  Ernest died on 28th February 1933 aged 62.  By 1935 the draper’s business at Commerce House was being run by Francis Beavan.

Georgina appears to have moved to be close to her son, Claude, as she died in the Ludlow area on 6th October 1939 aged 71.  She was buried with her husband in Thornbury Cemetery on 9th October 1939.

Of Ernest and Georgina’s children: