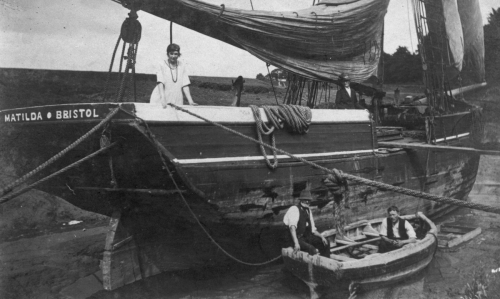 The Matilda at Littleton Pill

‘Tom White’ was Thomas Charles White born on 4th December 1886 and baptised in Thornbury on the 7th February 1887.  Thomas came from an Oldbury family with close associations to the River Severn.  His father, Charles White, was described as a mariner at the time of Thomas’s birth.  Tom’s uncle, Moses White, had a boat called ‘Matilda’ which sailed between Lydney and Oldbury with cargoes of coal.

Tom married Florence May Wheeler in Thornbury in the June quarter 1912.  Florence was born on 23rd April 1893, the daughter of David C Wheeler, a gardener from Heddington in Wiltshire and his wife, Sarah from Crowcombe in Somerset.  In 1901 they had been living in The Street Cottage, Alveston.

The family were living in the house later known as number 1 Saw Mill Lane in 1919 when young Tom started at the Council School.  Thomas was working for Edmund Cullimore at the Saw Mills.  Tom’s brother, Harry White also worked at the Saw Mill.

About 1935 the Whites moved to number 1 Crispin Lane.  The special register compiled in 1939 in preparation for the war lists Tom and Florence in the house.  Tom was working as a sawyer in wood mill.  We understand the previous tenants were asked to leave by the owner Edmund Cullimore as he wanted to house the White family.  They were to remain here all their lives.  Thomas died in 1958 aged 71 years.  Florence died in August 1965 aged 72.

Tom (Junior) (pictured above) also started to work at the Saw Mill.  He had an accident with the saw which resulted in him losing his thumb.  In spite of this handicap he went on to become a carpenter, working for many years for Thornbury Rural District council on housing maintenance.  He was keen gardener and often seen pushing his bike up to Daggs allotments.

Tom married Florence Winifred A. Bloom whose picture is above on the right.  Florence was born in Chippenham on 28th July 1915, the daughter of George and Florence Amelia Bloom.  Tom and Florence had a daughter, Pauline F. born in 1942 and a son, surprisingly also called Thomas (shown on the left) born on 4th April 1937.  This Tom learned how to cut men’s hair when he was in the forces.  He worked as a hairdresser at Iles for most of his life, although he did work for several years as a carpenter for the Rural District Council in the early 70s.

The special register compiled in 1939 in preparation for the war shows Tom and Florence and their son, Thomas D. C. living at 10 Market Site.  Tom was described as a private gardener.