and their son Francis 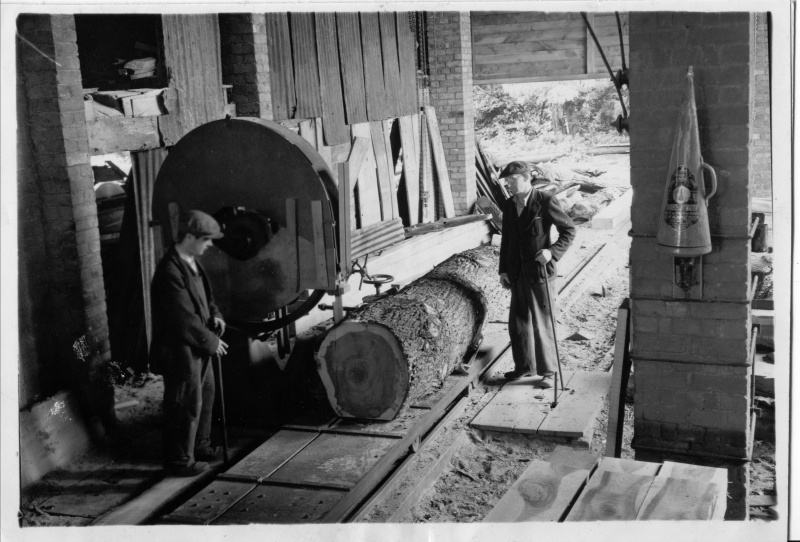 Harry and his brother, Thomas, both worked in the Sawmills.  The photo on the left shows Harry operating the saw.

Harry White was born on 9 April 1891.  He was baptised at St Mary’s Church in 1898, the son of Charles and Harriett White.  Charles had been born in Littleton on Seven and we understand his brother, Moses, had a boat there called the Matilda which used to go across to Lydney to bring coal to Thornbury.

In 1901 Charles and Harriet were living in 27 St Mary Street, just above the Horseshoe Inn on the junction with Horseshoe Lane.  Charles was aged 48 and Harriett aged 49.  Apart from Harry, their children were Annie aged 21, Thomas aged 14, Lily aged 12, and Bessie aged 5.  The photo on the right below shows Harry in 1906 when he was playing football for a team called ‘Thornbury Rovers’.

In 1917 Harry applied for exemption from military service on the grounds that he was engaged in work of national importance.  This application was supported by Edmund Cullimore, the owner of the sawmill.

In 1920 Harry married Kate Maishment who is shown in the photo on the left.  Kate was born on 18th September 1900, the daughter of William and Kate Maishment who were living at Cockmead on the Kington Road.  William was a gardener, the son of George Maishment, the tailor.  By 1910, William was operating a laundry from Cockmead.  When he died, the laundry appears to have been taken over by his wife as Mrs Kate Maishment is listed in the trade directories as operating it from here until 1923 when she moved to a laundry in Eastlands Road.

Harry and Kate White had two children: William Henry (Harry) born 2 September 1920 and Francis Arthur born on 5th September 1923.  Francis was born when his parents were living at the laundry at the Hollow on the Kington Road.  Around 1923/4, when Francis was two, they moved to 11 St John Street.

Harry and Kate stayed in 11 St John Street for the rest of their lives.  The register compiled in 1939 in preparation for the war describes Harry as a wood sawyer in timber yard, and young William was a sawyer of aircraft parts.

Harry died on 3rd December 1969 aged 78 years.  Francis moved back home to look after his mother who lived there until she was 91 years old and died on 6th June 1991.

Francis White  – he started at the Council Infants School in 1927.  When he left the Council School, he took up an apprenticeship with the Tucker Brothers.  He remembers being paid seven shillings a week in his first year and 14 shillings in the second year.  He left Tuckers to take up an engineering apprenticeship at BAC.

He joined the Army and became a member of the Airborne Division where he thought he might have the choice of becoming a paratrooper or a trooper carried in by glider.  He would have chosen the former because he “liked the idea of having a parachute when flying, just in case something happened…”.  In the end he was forced to go into gliders, although he was very fortunate in that he was never dropped behind enemy lines as he was trained to do.  When the forces of the British Airborne Division undertook Operation Market Garden at Arnhem, Francis was transferred to Cheshire to cover for other men sent to Holland.

On leaving the Army, he did some work in a voluntary capacity for the Sheiling School.  Here he met a German lady – Elizabeth – who was gardening there.  When she later returned to Germany, he went to see her there in Freiberg. Eventually they were married and lived there for a short time.

In 1951, Francis bought the house at 11 St John Street for his parents.  They had been renting the house from the Tuckers for many years.  He insisted that the Tuckers re-instate the garden and build a wall dividing his garden from their own.  When the Tuckers had purchased the three houses (Nos 11, 13 and 15), they re-arranged the garden layout to provide them at number 15 with a very large garden, leaving numbers 11 and 13 with just a small court area.

Francis returned to England where he lived at Rose Cottage, Crossways.  After his father’s death in 1969, Francis moved back to St John Street to look after his aged mother.

Francis was a very skillful man, and particularly liked working with wood.  At the time of the Millennium, he made a map of Thornbury as he remembered it which was used for the Thornbury Community Play and he made models of the houses in Thornbury.  These were auctioned after the play, but sadly the auctioneer did not realise that his models (unlike many of the others) were made of wood rather than card and they were sold rather cheaply.

We became very fond of Francis over the last few years of his life.  He was very quiet, respectful and modest man and was very helpful in sharing what information he had about the area and the people who lived here.  He died on 25th September 2008 aged 85 years.