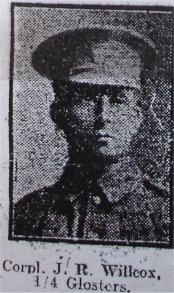 John became a soldier, enlisting on December 18th 1893 at the age of seventeen and a half in the 2nd Dorset Regiment (54th Foot).  He met his future wife, Sarah MacIlhenny, whilst he serving in Ireland.  She was born in Londonderry about 1876.  They married on 17th December 1895 in St Columbo’s Church, Waterside, Londonderry.  Sarah moved with John to wherever he was based.  In 1901 they were living in Shorncliffe Camp, Kent, where their two sons were born: John Arthur born on 14 October 1899 and Frederick Robert born on 5th September 1901.  During this period, John spent some time in South Africa helping to fight the Boers.

On his discharge in 1902, John moved to Cromhall where he became a gardener to the Revd. Curthoys, the Rector of Cromhall with whom he had been serving in the army.  He worked there for six years.  John and Sarah had a daughter, Edith Madeline, born on 18 September 1904.

In 1908, John was offered employment as head gardener with his former Captain, R. A. Bennett who was then living at The Park, Thornbury.  John and Sarah moved in to live at The Lodge located on the right at the top of the drive.   Another daughter, Grace Katherine was born on 23 December 1908 shortly after the move.  The 1911 Census shows that they had another child who had died.

At the outbreak of the First World War, John was called up from the Army Reserve and joined the 4th City of Bristol Battalion of the Gloucestershire Regiment.  In March 1915 John went to France and served from that time until the end of the war without receiving a scratch.  This was despite the heavy engagements on the Somme and at the third battle of Ypres in which his battalion was involved.  He was also to fight in Italy in 1917 and was involved with the Battle of Asiago Plateau.  He reached the rank of Company Sergeant Major and for his conduct on the field he was awarded the Meritorious Service Medal.

On demobilisation he returned to Thornbury Park in 1919, to his former position as head gardener and this he retained for 43 years until the death of Captain Bennett and the taking over of the Park by the Sheiling Curative Schools.  During this time his expertise in the field of plants and gardening was put to great effect by him being asked regularly to judge at local flower and vegetable shows.

In 1940 John was one of the first people in Thornbury to join the Local Defence Volunteers which were soon to be renamed the Home Guard.  Tragically John and Sarah were to lose both their sons early in the War.  Frederick Robert (who lived at 4 Crispin Lane) was killed in a road accident on 21 September 1940 aged 39 years.  He was on his way to do his duty in the Home Guard but had earlier served for seven years in India with the 2nd Gloucester Regiment.  His brother, John died of a ‘war illness’ in 1941.  His death was registered in the Exeter area.  John was brought back from Exeter for burial at Thornbury Cemetery on 20th June 1941.  The burial record shows John was a Quarter Master Sergeant aged 41 at the time of his death.  He had served for 28 years in the Army.  Both sons had served for many years in the Army and are listed on the War Memorial in Thornbury Church.  Interestingly only Frederick Robert is listed on the Commonwealth War Graves website.