Charles Hill Wilkins was born in Cam in 1834.  The 1841 census shows Charles was living with Keziah Wilkins in Cam Street, Cam.  We assume Keziah to be his mother.  There is no sign of Charles’s father, but there appear to be two siblings living there, Daniel aged 15 and Emma aged 10.  The 1851 census shows Charles had left home and moved to Dursley.  He was a shopman living in a draper’s shop.

The 1861 census shows Charles had moved to Bristol.  He appears to be listed as Charles Henry Wilkins unmarried aged 27 born in Cam.  In the census, his status is shown as ‘Head’ of what appears to be a large business in Wine Street which employed a large number of staff.  His occupation however is only described as ‘Assistant’ suggesting that the ‘Head’ status in only relative to the other people listed as living on the premises.  At this time the business is clearly shown as a Drapers and Charles is listed as one of about 40 draper’s assistants employed there.

Charles married Sarah Ann Hewlett in Bedminster area in 1861.  We know that they had at least three children: Annie Hewlett born in 1866, Emily Chapple in 1869 and Arthur Hewlett born on 4th June 1872.  We can’t find any of the Wilkins family in the 1871 census.  In the 1881 census the family were living at Greenbank, Bushy Park, Bedminster.  Charles was a draper’s assistant aged 47.  Living with Charles and Sarah were their three children, Annie H aged 14, Emily C aged 12 and Arthur H aged 8, all born in Bristol, a niece, Portia Wilkins aged 13 born in Gloucester and Charles’s sister, Emma an unmarried dressmaker aged 50 from Gloucester.

The family appears to have moved to Thornbury in 1883 as Arthur Hewlett was admitted to the Thornbury Grammar School on 1st April 1883.  On 1st November 1888 Annie Hewlett married in Thornbury.  Her husband was Henry Arthur Kettle, an oil merchant who lived in Crouch Hill, London.  On 9th June 1890 Charles and Sarah Ann’s other daughter, Emily Chapple, married Edwin William Savery, at Thornbury Wesleyan Chapel.

The 1891 census shows the property occupied by Charles Hill Wilkins a draper aged 57 born in Cam.

He was there with his wife, Sarah Ann who was aged 56 born in Banwell in Somerset and three servants.  At this time Arthur was working as a draper’s assistant and living in Wine Street.  This seems to be the same business in which Charles was working at the time of the 1861 census.

Arthur Hewlett Wilkins (shown in the photo on the right).  On the death of his father in 1898, Arthur took over the drapers shop.  In the same year he married Laura Elizabeth Symes, the daughter of Bernard and Laura Symes.  She was known by her middle name.  At the time of the wedding, Arthur was presented with a musical cabinet on behalf of members of the Wesleyan Church and congregation in recognition of his valued service as organist of the Thornbury Wesleyan Church.

Arthur and Laura had three daughters: Constance Mary born on 6th August 1899 and baptised on 22nd October 1899, Mildred Laura born on 4th September 1901 and Alice Margaret born on 28th October 1903.  All three girls attended private school then went on to the Council Upper School.  They all won scholarships to Thornbury Grammar School.  Constance went on to study at Clarke’s College in Bristol.  Mildred became a degree student at Bristol Training College and Margaret left to attend Birmingham University.

Arthur continued trading from 9 High Street which he gave the name ‘Manchester House‘.  The name of Manchester House was used by many draper’s shops throughout the country denoting the origin of their cotton wares.  The thumbnail on the left is an advertisement showing what Arthur had on offer at Manchester House.  Click on the thumbnail to see a larger image.

The building was re-developed at some time after 1903 and by 1910 Arthur began letting the Beehive, the property next door (7 High Street).  We have a copy of an undated advert which shows he was also using the Beehive.  The advert refers to his trade in glass and china which we suspect was the business carried out at the Beehive.

During the First World War Arthur served as a volunteer in the 1st Volunteer Battalion of the Gloucestershire Regiment.  The image on the left was taken from a  photo of a group of the volunteers who had won the Assistant Adjutants Cup on 6th April 1918.

In December 1917 Arthur was charged with misusing his sugar ration under the Sugar (Domestic Preserving Order) 1917.  This law was introduced to ensure that there was sufficient sugar for preserving fruit and other crops to feed the population throughout the year.  Apparently Arthur had obtained 43 lbs of sugar intended for preserving and he was alleged for have used them for some other purpose.  We don’t know the outcome of this case.

Arthur was well known in the Town, not just as a tradesman.  He was a member of the Thornbury Gleemen’s Society.  The photograph on the right above shows Arthur as a gleeman in 1896. His great interest in life however was the fire brigade.  He was one of the first members of the Volunteer Fire Brigade and became Captain of the Thornbury Brigade for 35 years until his retirement in 1945.  It was said he had a passion for the fire service.  When not in his shop, he could always be found in the fire station.  The photo below that on the right shows Arthur in his fire captain’s uniform.  Click on the thumbnail to see a larger image.

Following Arthur Wilkins death in 1949 Manchester House was put up for sale.  It was described as comprising large double fronted shop with show room, side entrance, large sitting room, pantry, kitchen, scullery and W. C.  On the first floor there were a lounge, three bedrooms and two boxrooms and on the second floor two bedrooms and workroom.  It doesn’t appear that the shop was sold at this time as the electoral registers show that Arthur’s daughter, Mildred Laura Cullimore and her family continued living there.  Mildred took over the running of her father’s shop.

Mildred was a member of the Thornbury Tennis Club and in 1925 she represented them in the inter-club ladies singles tournament at the West of England Championship at Redland Green.  She lost 6-1, 6-3.

On 15th April 1926 Mildred Laura Wilkins married Dudley John Cullimore.  Dudley was an insurance inspector aged 29 at the time of the marriage.  He was the son of John Croome Cullimore a coal merchant.  Dudley and Mildred were living at Church Road in 1926 rate book.  They had two sons: David born on 7th July 1928, and John H born in 1931.  It appears that Dudley and the family moved to Alveston where they had a house built in 1931.  We know that David attended a preparatory school in Thornbury, then Thornbury Council Upper School and from there went to the Grammar School.  The school records show Dudley’s address as being the High Street in 1934 and 1935. 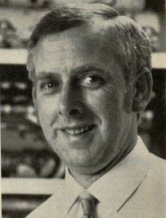 In the programmes of the Thornbury Flower Show the proprietor of Wilkins of Manchester House was shown as M. L Cullimore until 1958.  Dudley and Mildred’s son, John, eventually took over the business at Manchester House.  John is listed as living in 9 High Street in the 1961 and 1965 Electoral Registers.  A programme for the Thornbury Flower Show in 1961 shows that shop was run by a partnership of ‘M. L. and J. Cullimore.  In about 1969 John

moved to 28 High Street.  It is interesting to note that the shop was still trading under the name of Wilkins of Manchester House whilst they were at 28 High Street.  We are not sure how long he stayed.  He was certainly there in 1973 when an advert shown on the right appeared in the Gloucestershire Life magazine.  The photo on the left was also taken from that publication.  The details below the photo describe John as ‘the Chairman of the Thornbury and District Chamber of Trade and proprietor of the last old-fashioned drapery shop in the town established 85 years ago’.

Mildred died in Bridport in 1969 and Dudley re-married in 1971 – his second wife was Felicia Ashcroft, the widow of Tommy Ashcroft.