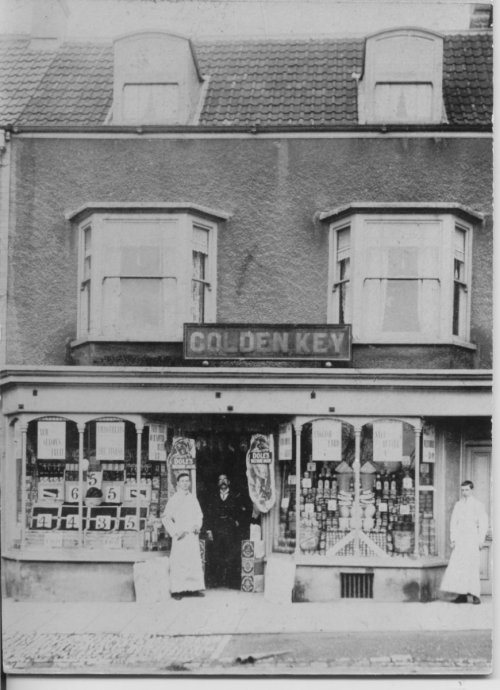 Following the death of John and Emma Williams, both in 1897, their estate was passed to their son, John Hodges Williams.  John was already a successful businessman.  The Thornbury directory 1897 lists him as a silk mercer, linen draper, family mourning and funerals furnished, and collector of income tax.  It shows him as operating from Victoria House and Bon Marche in the High Street.  In 1902, the words “& house furnisher, The Stores, and glass & earthen ware, The Beehive” were added to his list of interests.  John’s eldest son, John Henry Williams was allowed to live in Gloucester Road to run the tailoring business there.

When John Hodges Williams died in 1934 his estate was acquired by his son, Henry William Williams.

Henry was born in the September quarter of 1872.  The 1881 census shows that he was living with his family in the High Street.  His father John Hodges Williams was a draper and Henry aged 8 and his younger brother Frederick aged 6 were both still at school.

Henry married Louisa Caroline Marley then aged 29 on 21st September 1899 in Crouch End Harringey in London.  They must have settled to live in Thornbury.  Their first child, Leslie John Marley Williams was baptised there on 31st October 1900.  Their address at the time was Golden Key, High Street.  This shop, located at 11 High Street, was owned by Henry’s father.

In 1901 the census showed that Henry then aged 28 described himself as a draper.  Louisa was aged 27 born in London.  They were living with Leslie then aged six months and a servant Annie Cornock.  The 1906 Trade Directory shows him as a grocer and tea dealer at the Golden Key in the High Street.

They had one more child, Phyllis Marion baptised in Thornbury on 10th May 1906.

The 1911 census shows Henry was aged 39 years old and a grocer.  He had been married to Louisa (now aged 37) for 11 years and they had two children Leslie aged 10 and Phyllis aged 5.  They were living in the High Street.  They were still at the Golden Key in 1914 according to a trade directory, but by 1918 they were not being shown in the Thornbury electoral register.  They appear to have moved away from Thornbury, possibly to London where he was known to be living in the 1930s.  In spite of his move, he still acquired an interest in several properties in Thornbury, presumably inheriting these following the death of his father in 1934.

Their daughter, Phyllis married Leonard Spratt in Thornbury in 1930.  Their son, Leslie appears to have died in the Wandsworth area of London in 1944.

We have found a copy of the application for planning permission made by Henry William Williams on 18th December 1936 which details a considerable number of alterations to be made to the property.  This document states that Henry William Williams was the owner at this time.  It gives Mr Williams address at that time as 76 Conway Road, Southgate, London N14.  Henry and Ada appear to have lived here until at least 1960.

The Williams family owned a considerable amount of property; documents found so far give the names of John’s descendants (specifically his son, John Hodges Williams and his grandson, Henry William Williams) as the owners of other property which includes

Properties were were however gradually sold off, and at the present time, in Gloucester Road only number 12 Gloucester Road is owned by a descendant of the Williams family.  Henry William Williams moved to London where he died in 1960 aged 88.  The remaining properties in the Estate have been managed by his Trustees.

NOTE – around 1965, a Cyril Williams moved into Selwood, 22, Gloucester Road.  Cyril had been an apprentice builder working for Jack Hodges, and later ran his own building business.  Although he bought number 22 Gloucester Road from the Williams family and later acquired number 14 Gloucester Road, he was not connected, at least not closely connected, to the original family of John Williams, the tailor.