John Williams and his wife Emma

the Tailor of Thornbury

The Williams family was first connected to the properties in Gloucester Road when a young Thornbury tailor, John Williams, married Emma Hodges, the daughter of John Hodges, the builder, in St Paul’s in Bristol on 1st March 1851. 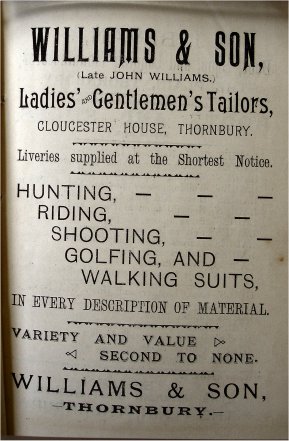 John was born in 1824, the son of another John Williams, originally a farmer from Alveston who later kept the  Wheatsheaf, a beer house which is shown in various records as being in Back Street, (now known as St Mary Street) but was (and still is) located in Chapel Street, Thornbury. John Williams and his wife, Hannah, had seven children.  Hannah’s maiden name was also Williams, but she came from a different Williams family who had originally lived in Ingst near Olveston.  The 1851 census shows that Hannah was deaf.

John and Emma Williams moved into Gloucester House (currently 2 Gloucester Road).   The house may have been specially built for them by Emma’s father, John Hodges.  An indenture dated 24 August 1852 shows that at that time the house was divided into two parts; widowed John Hodges in the one, and his daughter, Emma and her husband, John Williams, in the other.  However John Hodges was to re-marry in 1853 and move into another property further down the terrace.

“Accident – As Mr John Williams was driving from Bristol on Thursday evening, 23rd ult., in his trap, when on Woodhouse Down, both shafts snapped off short without any apparent cause. The whole party of four were thrown out of the trap, but fortunately all escaped uninjured though covered with mud. The horse with the shafts hanging, galloped away, and was not caught until it reached Alveston.”

We have been told that the tailoring business specialised in making military uniforms.  However the advert mentions a different kind of uniform; “liveries“.

The downstairs rooms in the house seem to have been the shop and offices and the family lived upstairs.  We have also been told that a building in the garden served as a workshop for the tailors.

In 1869 there was a strange court case in which it appears that John Williams was complaining about ordering 60 gallons of cider for which he paid but did not get the cider.  Click on the image of this report in the newspaper which is really only included as an example of the local dialect and behaviour!

The 1871, 1881 and 1891 Censuses show the family still lived in Gloucester House.  The 1871 Census shows the son, John Hodges Williams, had left the family home and married Julia Harriet Barrett from Highworth, Wiltshire.  The marriage took place in the March quarter of 1871.  John was aged 18 and Julia was 21.  John was living in the High Street running a drapery business.

In 1894 John retired from his tailoring business.  He made careful provision for the future, preparing agreements with his son, John Hodges Williams and his grandson, John Henry Williams as to the way the business would be run in the future.

John and Emma continued living at Gloucester House right up to the time of their deaths, both in 1897.  Emma died on 1 March aged 72; John died one month later on 3 April aged 72.  Both are buried in Thornbury Cemetery.