and his wife Mary Ann Wilkes The property shown above is The Chalet in Alveston near Thornbury as it looked in the early twentieth Century.  It is unusual for Thornbury Roots, a website dedicated to the history of houses in Thornbury and the families associated with them, to have a webpage about a house in nearby Alveston.  However this is one of our few exceptions because members of the Wilmot family who lived there owned so many cottages and other properties in Thornbury.

The 1861 Census shows that Mary Ann then only a child of nine years was living with her widowed father Thomas Ann in a house that became known as 53 St Mary Street.  They had a relation living with them who acted as a housekeeper.  She was Sarah Winstone aged 34.  Thomas Ann died in 1864 leaving Mary Ann an orphan.

The 1871 Census shows that Mary Ann Ann had gone to live with her uncle and aunt Henry and Emma Knapp at what became 8 The Plain in Thornbury.  Henry Knapp was a blacksmith. (Click here to read more about the Knapp family) Mary Ann Ann was only 19 at this time.  Emma and Henry died in 1882 and their property on The Plain also passed to Mary Ann Ann (who by that time was Mary Ann Wilmot).

Mary Ann Ann had married Samuel Mullett Wilmot of Bristol on June 19th 1879 at what was to become the United Reformed Church in Thornbury.  However Mary Ann retained ownership of all the property that she had inherited.  This was unusual for the time as a married woman’s property automatically became her husband’s.  We know that she took this step because we have a record of an indenture dated 18th June 1879 the day before her marriage.  In this document Mary Ann Ann, Samuel Mullett Wilmot, Henry Knapp and Charles Olds signed an indenture whereby “certain freehold property situate at Thornbury …and also certain property at Alveston” were conveyed to Henry Knapp and Charles Olds to hold in trust for Mary Ann “to the intent that she might have the power of absolutely disposing of the same as she might think fit.”

Her husband, Samuel Mullett Wilmot was the son of Henry Wilmot a commercial clerk and his wife Lydia and they lived in Bedminster.  He was born in 1845.  The 1871 Census shows that Samuel was a commercial clerk in an iron works.  His obituary later explained that he was a founder of a well known firm, Messrs S. M. Wilmot and sons, sheet iron and allied manufacturers.

By 1881 Samuel and Mary Ann were living in Redcliffe in Bedminster.  He was 36 in this Census and was the manager of a Galvanised Iron and Steel Works.  Mary Ann Wilmot was 29 years old.  The will of Henry Knapp that named Samuel as a trustee and was proved in 1882 gave Samuel’s address as Grove Cottage Cumberland Road in Bristol.  By the 1891 Census the Wilmots had a substantial family.  They were living in what was then called Grove House in Redcliffe with Margaret nine years old, Samuel eight, Arthur seven, Henry six, Thomas five, and Lydia three.

It is interesting to note that although the Censuses show that the Wilmots were living in Redcliffe at this time they maintained their close links to Thornbury, especially to the Congregational Church.  In January 1890 the minutes of a meeting at the church noted that Mrs Wilmot had made a thoughtful and generous gift of £35.  A letter from Mrs Wilmot explained that at the time that the church had bought the land on which to build the new schoolrooms she had wanted to donate it herself but she had not then been in a position to fulfil this wish.  Her circumstances had since changed and now she was able to give them the £30 they had paid for the land and £5 for their legal expenses.

By the 1901 Census they also had Herbert aged five and Gertrude aged three.  They had moved out of the city to Alveston.  The house is not named in this census but we know that the Wilmots owned The Chalet, which is as can be seen in the photograph above is a very large house in Alveston.  Samuel Wilmot’s obituary said that not only did he build the house but as an ardent horticulturalist he also transformed the grounds “into one of the prettiest spots in the vicinity.”  Samuel was an active member of the Congregational Chapel in Thornbury, to which his wife also belonged.  He was also a Justice of the Peace in the area.

The 1911 Census names the Wilmot’s home as The Chalet and shows that Samuel was now aged 66 and still described as a Galvanised Iron Manufacturer.  He had been married to Mary Ann for 31 years and they had had thirteen children, four of whom had died.  Their eldest daughter was Margaret and she was 29 and single.  Arthur aged 27 and Henry aged 26 were commercial travellers. Thomas aged 25 was an accountant.  They all worked for the Galvanised Steel Works.  Lydia aged 23 and Kathleen aged 19 were also single.   They had three servants.

Mary Ann died on 23rd February 1917 aged 65.  The Gazette reported the funeral of Mary Wilmot in March 1917.  It stressed the “universal respect and esteem in which this deceased lady was held.”  Apparently she had shown “great interest” in social work in the area and in the Sunday School, although we have no further details about how this was expressed.  She was buried near to the Congregational Church because that had been her place of worship for over fifty years.  In fact, she was one of the longest standing members of the church when she died.  The report described her funeral procession which was led by a Washington car, followed by her favourite pony and carriage filled with flowers.  The funeral was attended by many people from the Thornbury area and of course members of immediate family, including her brother in law and sister in law Mr and Mrs J Carwardine.  The Carwardine family were soap and tallow makers from Thornbury who had moved to Bristol where they had a factory there before becoming better known in connection with coffee.  Click here to read about the Carwardine family.

Mary Ann Wilmot’s will was dated 26th January 1914 and appointed her husband Samuel, her son Arthur Mullett Wilmot, her daughter Margaret Redcliffe Johnstone and her solicitor William Davis Canning to be her executors and trustees.  Her property in Alveston was left to her trustees.  The remaining property could be put up for sale to provide an income for her husband during his lifetime and then after his death legacies were made to her son Samuel Alexander Wilmot (£250), Arthur (£50), Henry Wilkes Wilmot (£50) Thomas Ackland Wilmot (£50) and Herbert Ralph Wilmot (£150).  The balance was left in equal shares to her daughters as and when they became twenty-one years old.  Margaret Redcliffe Johnstone was left a double share. 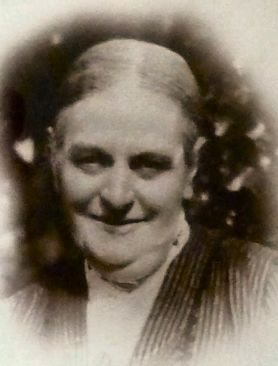 Samuel Wilmot married again at the David Thomas Memorial Church in Bristol on 17th September 1919.  His second wife was Selina Ann King, the daughter of Charles and Anne King.  We have a photograph of Selina here on the left.  Selina was the sister of Clara King who married John Hookway Carey.   Read more about John and Clara

Samuel died on 5th October 1923 aged 78.  According to the report of his death he had been in “indifferent health for some time”.  The funeral was a large one and attended by his family and many of the other well known local families.  Probate in respect of Samuel’s will was granted to Arthur Mullett Wilmot and Herbert Ralph Wilmot galvanised iron manufacturers and their solicitor John Gammon Wicks.  The effects were valued at £27, 670 18s 6d.  Their tombstone is still visible in the graveyard of the United Reformed Church.

Following Samuel’s death, Selina moved from The Chalet to live in ‘Clovelly’, the house now known as1 Pullins Green.  On 3rd June 1924 The Chalet was put up for sale at auction.  Selina was listed as living in Clovelly in the 1926 Prewetts Directory and 1927 Electoral Register.  The minutes of the Congregational Church for 27th July 1927 mention that Selina ‘was willing for the church to endeavour to buy the house in her occupation for a Minister’s residence’ and they proceeded to do this.  Selina left the property and it was occupied by the new minister, Frank Harker.  By 1931 the Electoral Register shows Selina had moved to Church Road.  It is interesting to note that she died on 28th February 1933 in the house called ‘Clovelly’ in Thornbury.  The burial records held by the URC show that she was living at ‘Clovelly, Church Road, Thornbury’ so it is possible that when she moved to Church Road, she took the name of Clovelly with her. We have been lucky enough to receive some advertisements from Sinbad Wilmot that show the galvanised metal company continued after Samuel’s death and was still called S M Wilmot and Co Ltd in the 1950s.  See right and below.

The Children of Samuel Mullett Wilmot and his wife Mary Ann. Following Samuel’s death, the six cottages in Gloucester Road were put up for the sale at auction in 1924, but they failed to find a purchaser.  The 1925 Rate Book shows that these properties were still owned by the “Representatives of the late S. M. Wilmot”

We know from a schedule of December 24th 1942 that four other lots of properties that Mary Ann Wilmot had once owned were sold in 1924.  These were:

In August 1924 after the sale of these properties the sons of Mary Ann Wilmot received their legacies as specified and the daughters received their shares of the remainder in the proportion detailed in the will.  Margaret Johnstone received £649 9s 1d and her sisters each received £324 15s.  The 1926 Rate Book shows the remaining properties were then owned by ‘the representatives of S. M. Wilmot’.  The account books of W.W. Pitcher show that work was done to connect the six cottages in Gloucester Road once owned by Mary Ann Wilmot to the sewer in 1936/37.  The work was charged to the estate of S. M. Wilmot.

In 1942 on December 24th ownership of the remaining properties was transferred from the trustees: Mary Ann Wilmot’s son and daughter, Arthur Mullett Wilmot and Margaret Redcliffe Johnstone and her solicitor John Gammon Wicks to the “transferees” Mary Ann’s four daughters: Margaret herself, Lydia Greenwood, Kathleen Winstone Wilmot and Gertrude Mary Wilson.  This was done with the intention of selling the properties and dividing the proceeds in accordance with Mary Ann Wilmot’s will.

By a conveyance of 26th September 1949 the four daughters of Mary Ann Wilmot sold the second cottage in the row in Gloucester Road (which became number 3 Gloucester Road) to Marion Leila Fleming.  We know nothing about this lady and we would be grateful to hear from anyone who can tell us more.

In 1950 they sold another cottage (later number 9 Gloucester Road) to Mabel May Norris.  By 1957, the house the occupied by Joseph and Mary May who stayed in the house until about 1962 and were its last occupants.  Henry Smith who lived in Gloucester Road at that time told us that Mr Norris was quite upset when the Council condemned the property.  He was moved to a Council flat in Alveston and had to pay for the demolition.  Dick Shipp bought the property for the development of his garage. Joseph died in 1972 aged 82 years.  Mabel died in 1984 aged 91 years.
Kathleen Winstone Wilmot died on 25th My 1951 and by her will of 31st May 1940 she left her share in the remaining houses to her sisters.  Margaret Redcliffe Johnstone died 17th December 1963.  On 27th June 1968 the two remaining sisters Lydia Greenwood and Gertrude Wilson sold their property on Horseshoe Lane and Rock Street to the Council for £2,600.