Clock and Watch-maker of Thornbury 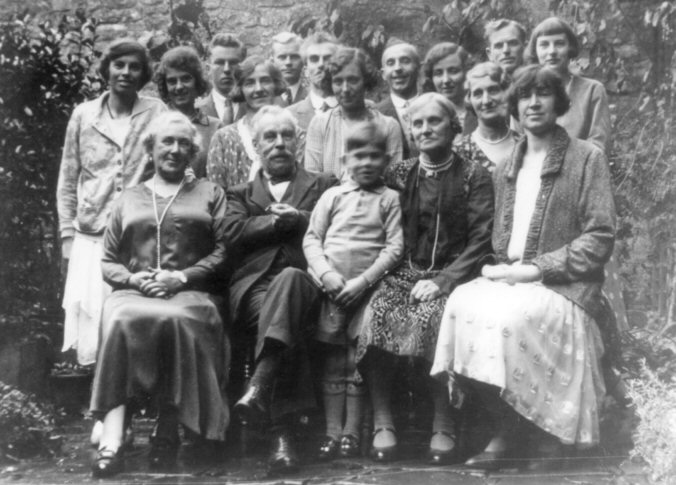 The photograph below on the left is of Yarnold’s clock and watch-making business in the High Street in Thornbury owned by William Henry Yarnold.   Click here to read about the other clockmakers in Thornbury.  The building is the tall light coloured one with “The Noted House” sign at its roofline.

Despite the fact that it was a jeweller and watchmaker, there appear to be a great many other wares outside the shop front.  The High Street is recognisable today and the shop is now known as 16 High Street.   The building on the extreme right was the Market Hall and is today called a shop called Wildings.  The building with the distinctive pitched roof and bay windows is now a charity shop and once was a tea shop called Nell Gwynne’s. “Gloucestershire Clock and Watch Makers” by Graham Dowler says that William was born in 1859 and that he was the first child of James Henry Yarnold a carpenter, joiner and cabinetmaker and his wife Frances Brown of Cheltenham.  FreeBMD website confirms that William Henry Yarnold was born in the Cardiff district in the June quarter of 1859.  He was born on 25th March 1859 and baptised in St Mary’s Church in Cardiff on 26th June 1859.

The 1861 Census shows “Henry” Yarnold aged about 30 was lodging in Gloucester with his wife Frances and their two year old son William.  Although William’s father, James, was a carpenter, the head of the household, interestingly was Robert Brown a watchmaker.  The marriage certificate of James Henry Yarnold and Frances Brown dated June 26th 1856 confirms that Robert Brown the father of Frances was a watchmaker.  It seems that William was following his grandfather’s trade.

According to Dowler, William was apprenticed to William Mann of Gloucester.  We have a photograph below on the right of William Henry Yarnold as a young man.

By the 1881 Census William then aged 22 had moved to Thornbury and the Census shows him lodging with Esther Morgan “an eating house keeper” living at 18 High Street.   The 1881 census shows that William was a watchmaker and his obituary in 1947 says that he actually founded his watch-making business in 1880.  He married Ella Jane Riddiford  at a registry office in the Barton Regis area of Bristol on 3rd November 1881.  Ella was born in Caerwent on 3rd September 1861, the daughter of Charles Riddiford and his wife, Jane (nee Wise).

On August 14th 1885 The Bristol Mercury had an article which said that William Yarnold bought a premises in the High Street which was occupied by the Rev. T. Kirby at £19.00 a year for £375.  This property was at 16 High Street.

William Yarnold was a prosperous businessman and owned other properties which added to his income.   We know from other documents that he acquired 6 St Mary Street on 21st January 1885 for £117. 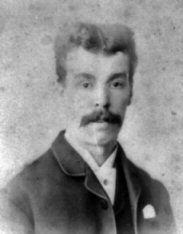 By 1890 the Special Rate Book shows that he owned and occupied the shop in the High Street which is shown above.

The 1891 Census shows that William Yarnold then aged 32 and described as watchmaker and jeweller was living with his wife Ella in the High Street.   At that time their children were; Percy aged four, Frederick aged two and Victor Gerald aged less than one month.

The 1901 Census shows that Frederick aged 18 and Percy aged 14 had already become apprentices in the watch-making business.  Victor was only aged 10 at this point but he too was destined to become a watchmaker.  Their children now included Reginald aged five, Mabel three and Albert one month.  A 1907  Poor Rate shows that William owned two houses in Gillingstool

Thornbury Gleemen in 1890s. Yarnold is second from the right in the front row.

William Yarnold was a member of the Gleemen.  This was a well known group of singers in Thornbury.  We have a photograph of them below on the left taken in the 1890s at Berkeley Castle.   Please click on it for a larger image.  Yarnold is in the front row and has a very distinctive hairstyle with a central parting and curls.  He was an active participant in many other aspects of Thornbury life. The Bristol Mercury of 1899 for example shows that he was an officer for the Court Leet (a Searcher and Sealer of Leather) who helped to ensure the quality of craftsmanship in the area and he was also a juryman for the Borough of Thornbury.  He also stood for election as councillor.  This latter attempt was unsuccessful and he polled only nine votes and came last out of the 19 people standing for the election.

The business was obviously thriving as despite the extensive household they had two servants living in the house Sarah Rugman aged 17 and a nurse Mary Long aged 64.  An advertisement for his business appears below on the right.  Another advertisement found in a South Gloucestershire Gazette of 1911 advertised “Yarnold’s Railway Timekeeper 25/-“. This is an interesting sign of the times. “Railroad watches” were introduced in America and became very popular after a fatal crash in 1891 caused by the railroad engineer’s watch which was four minutes out because it had stopped and been restarted.  These “railroad watches” were high quality (at least 19 jewels and sometimes 23 or 30).  They were inspected and approved for use on railroads.  “Railway Timekeepers” were cheaper versions of this using a similar name and appealing to the mass market.  They have been likened to buying fake Rollex watches!

A reminiscence by Betty Longman nee Sage recalled Yarnolds always had a sign in the shop ‘NO REPAIRS THIS WEEK.’  She said that ‘Yarnold was well off and didn’t want the work. ”

Charley Davis said that ‘Yarnold’ was the first in Thornbury to own a car, but we have heard that other people including Dr Lionel Williams had the first car.   Yarnold used to drive to Eastwood Park weekly to wind the clock for Sir George Jenkinson according to Charley.  He said the car could be heard coming for miles on account of the smoke and noise!  The spark plug needed to be cleaned each trip.

We know from an application to exempt his son Percy from military service in 1917 that William had bought a tailor’s business in George Street, Nailsworth.  This shop was being managed by Percy and we assume it was bought by William for Percy.  It traded under the name of ‘Yarnold and Sons, clothiers and boot factors’ and later ‘Yarnolds Menswear.   We understand that Percy ran the shop for many years.

We have a photograph of the whole Yarnold clan taken before 1946 at the top of the page.

William had retired by 1926.  When his son Victor was married in 1926 the newspaper said that William and Ella lived in Caerwent in Alveston.  Victor took over the family business and the High Street premises.  By 1938 the Electoral Roll shows that William and Ella returned both to Thornbury and to the High Street.  They were living at a house called Westbourne which we understand to be 55 High Street.  They are shown as living there in the special register compiled in 1939 in preparation for the war.

In his will dated 18th September 1940 William appointed his sons Frederick William Yarnold of Malmesbury, Percy Yarnold of Nailsworth and Victor Gerald Yarnold of Thornbury to be his executors.  On 19th April 1945 in a codicil to his will he appointed Reginald Harry Yarnold of Gloucester to replace Frederick William Yarnold who had pre-deceased him.  Ella Jane Yarnold died on February 12th 1945 aged 83.  The Electoral Roll the following year suggests that William continued to live at Westbourne.  William Yarnold died on January 6th 1947 aged 87.  He was buried with his wife in Thornbury Cemetery. On 21st June 1947 William Yarnold’s executors sold 6 St Mary Street to Leslie James and Lyndon Augustus Hawkins for £450.
Of the children