In 1900 Edmund Cullimore embarked on another business venture, opening the Thornbury Brick and Tile Works on land in Gillingstool, to the east of the Baptist Church. We understand from an article in Thornbury Magazine of November 1981 that small brick works like this were seasonal as the frost could damage the bricks whilst they were drying.  The article says that for this reason workers in the brick works were employed in Cullimore’s saw mill during the winter.  We do not have any confirmation of this interesting piece of information and would like to know more.

An anonymous account found amongst the papers of former local historian Mary Bruton explains that ‘E. Cullimore started a brick works at Gillingstool; this was also driven by electric motors from the saw mill supply. The brickworks made double Roman tiles, pan tiles, agricultural land drain pipes and wire cut bricks. The clay was dug on the site, the first 6 feet being used for tiles, and deeper clay for bricks.’

We don’t know a great deal about the brickworks and would like to hear from anyone who knows more.

A Gazette newspaper article dated 4th October 1913 shows that it had struggled in the early years and was allowed to lapse.  Edmund re-opened it again about 1911 and this time it was more successful.  It was being managed by a Mr Morgan at the time of the 1913 article.  We understand the works specialised in the manufacture of roof tiles, drainage pipes and the distinctive yellow coloured bricks which can still be seen in Thornbury.  The clay for the manufacture of the products was taken from a large pit adjoining the works. 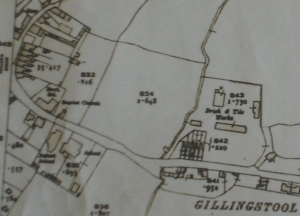 Click on thumbnail map dated 1921 on the right to see an image of where the works was situated.  The map also shows the group of 5 cottages which were built at the bottom of Gillingstool Hill to provide accommodation for the workers.  Another two cottages were planned in 1933, but we don’t think they were built.  An OS map from the 1960s shows only five cottages there.

On 21st February 1947 the Western Daily Press reported on a big blaze that completely destroyed the tile-drying shed.  The blaze was dealt with by N.F.S. units from Thornbury and Bristol and took about an hour to get under control.  One witness said that it looked like a volcano when it was burning.  Mr E.C. Grace said that they had just arranged to step up the production of tiles but up to that time they had been producing about 800 tiles a week.  This will now have to cease until a new tile drying shed could be built.  They had been producing 15,000 bricks a week until bad weather interfered but brick production would not be affected by the fire.

A Gazette article dated 17th July 1948 reports on another major fire at the brickworks in little more than a year.  A large drying shed caught fire and a lot of damage was caused throughout the plant.  Apparently the shed was full of tiles, bricks and field drainage pipes which were destroyed in the blaze together with tools etc.  The management was apparently confident that no one would be laid off and that production would soon resume.  It seems the firm had coped with such setbacks before.

We are not sure when the tile and brickworks closed but the buildings were demolished and removed about 1960.  The clay pit was filled in and is now covered by the grassed area adjoining Oakleaze Road.