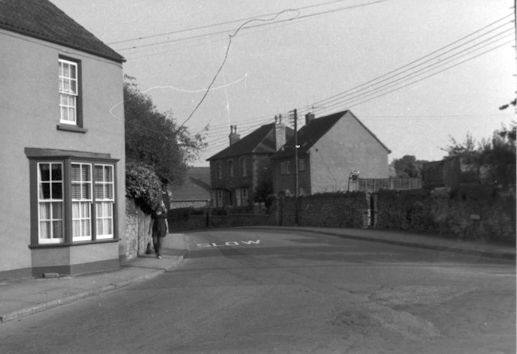 Gillingstool Cottage was one of the oldest in this part of Gillingstool.  The cottage was built on the large piece of land originally owned by Thomas Smith and then it descended through his son, Thomas Smith jnr, grand-daughter, Ann Child to Ann Wise, the wife of Thomas Wise.  We do not know who built the house or when.  Click here to read the early history of this plot

It appears on the 1840 Tithe Map when it was described as a ‘house and garden’ owned by Thomas Wise.  The typed transcript we have seen refers to the occupant as John Marshman, but we believe that this is likely to have been a misreading of the name John Maishment who was living in the house in the 1841 census.  The 1841 Tithe Map shows the house had a large garden, but in the 1880’s a large part of this garden was used to build another house which became known as ‘Jubilee House’ and to provide it with a garden.

We know from the 1859 and 1862 rate books that ownership of the house passed to Elizabeth Dyer and following her death in 1870 to her unmarried daughter, Hannah.  Click here to read about the Dyers

When Hannah died in 1885, she left her estate to Laura Symes, the wife of Bernard Symes.  We haven’t been able to establish the relationship between Hannah and Laura.  Bernard and Laura had been living with Hannah for several years.  The 1910 rate book shows that Laura’s son, George Bernard Symes had become the owner.

We don’t know how they acquired it but the next owners of the property were Luke Ball who lived at Alveston.  Luke died on 14th September 1946.  Luke’s executor was Sarah Jane Ball whose address was Fieldside, Alveston on 5th April 1952 when she sold the property to Raymond Thomas Rugman for £875.

Raymond Thomas and Alma Elizabeth Rugman – lived in the house from about 1953 onwards.  Ray was born on 30th May 1922, the son of Sidney Rugman, a lorry driver and his wife, Helen (nee Pritchard) who lived in Hackett Lane.  Alma, or Betty as she preferred to be called, was the daughter of Lawford Henry and Florence Blanchard from Tytherington, but who were living in Chapel Street, Thornbury at the time of the marriage.  At first, Ray and Betty lived at 17 Market Site, the home of Ray’s parents before moving to Gillingstool Cottage.

Ray worked in the quarry at Tytherington but he later moved to work for the CEGB at Berkeley Power Station.  Ray and Betty had two children: Margaret Helen born in 1953 when they were living at Gillingstool Cottage and Malcolm.  Margaret’s baptism record shows that Ray was a ‘machine shovel driver’.

They were to remain in Gillingstool Cottage until it was sold to Gloucestershire County Council for £5000 on 22nd December 1971.  The Council wanted the property to widen the road and the house was demolished.  The remaining land was then sold to Northavon District Council and became part of the Rock Street Car Park.