The above photograph shows that there was once two terraces of houses at the top of Gloucester Road in Thornbury, one on either side of the road. On the right hand side (or westward) of the road in this picture is part of the terrace of six little cottages that later became known as numbers 1 to 11 Gloucester Road.  The photograph was taken about 1900 and appears to show the residents near their own houses. As you will see from the photo the cottages fronted directly on to the road.  We have been told that the doors of the houses opened straight into the front room.  Each cottage was ‘two-up two down’ and there was a little garden to the rear of each property.

The houses might well have been somewhat insanitary.  The records of the Pitcher family business show that as late as October 1936 sewage work was being done on these six houses in Gloucester Road Thornbury.  It makes special mention of the situation in number 11 ;’at Monk’s house filling up open drain under living rooms and laying 4 inch glazed stone ware drain with back inlet gulley – to cure smells from the street drain outside front window.’ 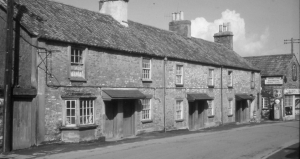 The houses remained until the 1960s and are shown here on the right. The aerial photograph shows these same properties from the rear.

To establish some idea of who lived in each house, we have trawled through census records, electoral registers and parish records.  The lack of house numbering throughout most of the period might mean that we have made some mistakes.  The problem is compounded by the fact that the terrace was numbered before the rest of Gloucester Road and residents sometimes used this 1 to 6 numbering system.  There is a report of the death of one of Michael Canty’s lodgers in 1848 and her address was said at the time to be 6 Gloucester Lane.  This later became 11 Gloucester Road.  From about 1953, the whole road was given a modern numbering and the terrace was given odd numbers from 1 to 11 Gloucester Road.  When looking at more recent times, we have tried to sort out these problems using the knowledge of people who lived in the area. 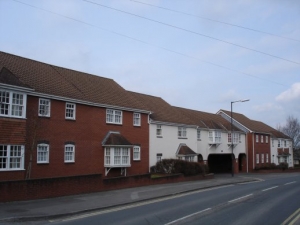 There was also a group of other buildings a little further down Gloucester Road just visible in the photograph above right. These buildings became part of Dick Shipp’s garage.  Click here to read about the history of these buildings

We know that the six cottages were built earlier than those opposite them in what was then known as Laburnum Terrace, but unfortunately we don’t know how much earlier.  They were all there in 1840 when the Tithe Survey was carried out.  At this time, the whole terrace was owned by Isaac Roberts.   He is shown in the survey as occupying number 3.

We don’t know anything about Isaac except that the 1840 Tithe Survey shows he also owned the property at 8 The Plain and lived at 9 The Plain.  The Tithe Apportionment says that Isaac was occupying one of the cottages, although it seems unlikely that he was actually living there.  There is an earlier reference to an Isaac Roberts having occupied the must mill which was located in St John Street but we don’t know if this is same person.

The Hereford Journal of 4th March 1846 has an obituary which appears to relate to this Isaac Roberts.  It says “March 2nd at his lodgings in Eign street in the 84th year of his age Mr Isaac Roberts formerly road-surveyor of this district and landlord of the Grapes Tavern but for the last 30 years a resident at Thornbury Gloucestershire.”   The Edinburgh Gazette of January 7th 1817 may have an explanation of Isaac’s change of circumstances and abode as it announced the bankruptcy of Isaac Roberts late of Hereford brandy merchant.

A document headed ‘Charities vested in and under the Management of the Corporation’ written in about 1826 mentions that ‘Mr Isaac Roberts, an inhabitant of the parish to whom the management of the poor had been committed by the Vestry, converted the said two cottages into offices for the said Workhouse, which alteration appears to have been unwarranted, and in prejudice of Staffords Charity‘.  This refers to the two cottages at 7 and 9 St Mary Street.

George Watts – the 1859 Rate Book shows that George was the owner of these six properties and that he also owned what later became at 8 The Plain, and occupied 9 The Plain.  George didn’t live in any of these properties and we don’t know any more about him.  The most likely George Watts was the grocer or butcher born in Wickwar in 1795 and he was living in Cromhall in the 1841 and 1851 Censuses. 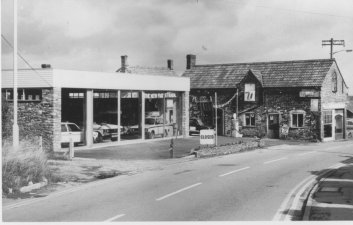 The 1876 Special Drainage Rate Book shows that the next owner of the six cottages was Thomas’s daughter, Mary Ann Ann.  She had inherited these from her father, Thomas Ann, who died in 1864.  The Special Drainage District Rate Books of 1880 and 1885 show that the owner later became Mary Ann Wilmot.  This is because Mary Ann Ann married Samuel Mullett Wilmot of Bristol on June 19th 1879 at what was to become the United Reformed Church in Thornbury.  Mary Ann continued to own all her property in Thornbury, including these six cottages, which was unusual for a married woman.  Mary Ann died in 1917. Much of her property was sold in 1924 after the death of her husband Samuel.  The cottages in Gloucester Road continued to be owned by the Wilmot family.  They were first held in trust for the daughters of Mary Ann Wilmot and later by them in person. Read about Mary Ann and Samuel Wilmot and their children.

By a conveyance of 26th September 1949 the four daughters of Mary Ann Wilmot sold the second cottage in the row in Gloucester Road (which became number 3 Gloucester Road) to Marion Leila Fleming.  We know nothing about this lady and we would be grateful to hear from anyone who can tell us more. 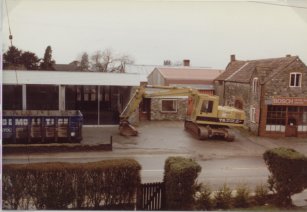 In 1950 they sold one of the cottages (later number 9 Gloucester Road ) to Mabel May Norris.  By 1957, the house the occupied by Joseph and Mabel May who stayed in the house until about 1962 and were its last occupants.  Henry Smith who lived in Gloucester Road at that time told us that Mr Norris was quite upset when the Council condemned the property.  He was moved to a Council flat in Alveston and had to pay for the demolition.  Joseph died in 1972 aged 82 years.  Mabel died in 1984 aged 91 years. 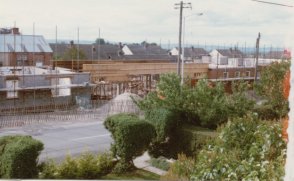 Kathleen Winstone Wilmot died on 25th May 1951 and by her will of 31st May 1940 she left her share in the remaining houses to her sisters.  Margaret Redcliffe Johnstone died 17th December 1963.

In the early 1960s, it became difficult to ensure the row of houses in Gloucester Road met modern building regulations and they became dilapidated when left vacant.  Eventually, we understand that the Council declared them unfit for habitation and ordered them to be demolished.

The land on which the cottages had stood was purchased by Dick Shipp who was using the adjoining ‘stable’ building as a garage and motor repair workshop.  He had a modern car showroom built for the Fiat cars he was selling.  In 1977 Dick sold the business and for a few years it operated selling classic cars.  Finally in 1987, the garage was closed and the whole site re-developed with the building of Gloucester Terrace flats.