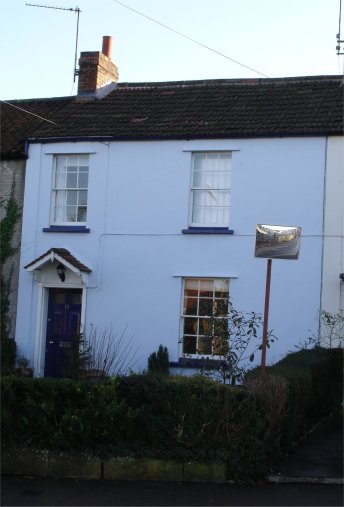 This house did not become 10 Gloucester Road in Thornbury until the numbering of houses was introduced generally until the early 1950s.  However, there were numbers allocated to the houses in the terrace from a lot earlier.  This house was originally described as ‘2 Laburnum Terrace’.

The 1840 Tithe Map shows that there was a workshop and yard on the land now occupied by number 10.  The workshop and yard were owned and used by John Hodges who was living just down the road and was building the properties which were to become Laburnum Terrace.  To the rear of the workshops was a garden that was also owned and used by John Hodges.

John arranged for the transfer of his property to his children before his death and ownership of number 10 was transferred to George Hodges.  George carried on as owner until his death in 1905.  In his Will, George arranged for Trustees to manage the property.  The trustees were initially his four surviving daughters, Sarah Ann Hodges, Fanny Staley Hodges, Emma Jane Hodges and Laura Evelyn Balls and one of his two surviving sons, Austin Edgar Hodges.  Over the years, these Trustees gradually died off and new ones were appointed to ensure that the Estate was managed properly.  The Trustees continued to own the property until 1958 when it was sold for the first time.  Read more about George Hodges and his heirs 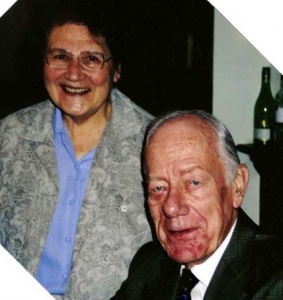 The Jenkins family – in March 1958 the house was bought by Ronald and Winifred Jenkins from the Trustees of George Hodges.  Ronald Edward Jenkins married Winifred Kate Webb on 1st September 1952.  Ron was a stress engineer employed by Bristol Siddeley.  He was the son of William Jenkins, a printer and had lived at The Nook, Rudgeway at the time of his marriage.  Winnie was the daughter of the late Henry Webb, labourer of 13 Horseshoe Lane.

Ron and Win moved from 10 Gloucester Road in June 1982 to a new house built nearby.  Their son, Stephen Graham Jenkins took over the house.  The 1986 Electoral Register shows him there with Dennis A Glew.  Stephen later moved to Purton.  Ron Jenkins died on 23rd December 2012 aged 86.

The Thoburn family – in October 1987 the house was bought by Alan and Mary Thoburn who still live there.

The tenants of 10 Gloucester Road

The house was rented out to tenants during the time it was owned by the Hodges family.  During this time we have traced some of the families who occupied the house:

The Gerrish family – it would appear that George and Sarah Gerrish first lived in Castle Street in Thornbury soon after their marriage in 1849.

George Gerrish was born in Bristol about 1825.  He was the son of Elihu Gerrish, a brushmaker and his wife, Elizabeth.  In 1841 the Gerrish family were living at Conduit Place, Bristol.  On 13th January 1849 George married Sarah Houlden in Clifton in Bristol where Sarah was living at that time.   A website that Sandy Goldsmith produced to show her family history research shows that Sarah was born on September 4th 1822 in the Temple area of Bristol.

George and Sarah’s first son, George, was baptised in Thornbury on 24th July 1850.  The 1851 census shows them in living in 5 Castle Street.  George was a solicitor’s general clerk.  There is some confusion over George’s occupation.  At the time of his marriage he was described as an accountant and on the baptism record of his son born in 1850.  In the 1851 census George was described as a general clerk in a solicitor’s office.  He was described as a stationer when their daughter, called Sarah Rose but apparently known as Rose, was baptised in Thornbury Church on 21st April 1852.  He was later described as an accountant or as a law stationer.  Perhaps he kept the books for a legal stationery business.

The 1859 rate book shows the Gerrishs had moved to 79 High Street.  The 1861 census also shows them there.  They now had several more children apart from George: Sarah Rose baptised on 21st April 1852, Jessy baptised on 4th June 1854, Florence baptised on 6th January 1856 and Charlotte Kate baptised on 5th September 1858.  George’s mother, Elizabeth was also living with George and Sarah.  The last Will of Daniel Burchell dated 1866 shows that George was the solicitor’s clerk for Richard Scarlett.

By 1867 George and Sarah had moved to 10 Gloucester Road.  George died aged 46 and was buried in Thornbury on March 15th 1871.  The death certificate apparently shows that George died of paralysis and the person who officially reported the death was Thomas Hudson, the Inland Revenue officer who lived next door at number 8.

The 1871 census shows that the widowed Sarah Gerrish was living in number 10 Gloucester Road, Thornbury.  Sarah seems to have had quite a hard life as their son, George, had died only five years earlier in 1866 aged just 15 and another child, Jessy, had died only the previous May aged about 16.  It is possible that either Sarah herself was in poor health or her elder daughter Rose was, because the 1871 Census shows that the only person in employment was the younger daughter, Florence, who was apprenticed to be a dressmaker.  The household had two visitors listed; a widow called Elizabeth Taylor aged 51 and Charlotte Elizabeth Taylor aged 25.

On 1st June 1871 Sarah Gerrish was awarded administration of the effects of late husband George Gerrish.  Her address was given as Weston-super-mare, Somerset and George’s effects were valued at less than £50.

Sarah and her family eventually moved to Lambeth in London.  In 1875 Sarah’s daughter, Sarah Rose married Robert James Lucas in Lambeth in London, and they had a daughter Sarah Rose Mary Lucas who was baptised on 12 April 1876 in Brixton, St Matthew.  However Sarah Rose Lucas died in 1878 and Robert James Lucas remarried.  Also, on 26th March 1876 in Lambeth another of Sarah’s daughters, Florence Gerrish married Edward Grimstone Brewer.  They had nine children.  Florence died in 1915 in Lambeth, London.

The 1881 census shows Sarah and her youngest daughter Charlotte living in Lambeth as lodgers in the home of James Robertson, a carpenter from Scotland.  Charlotte was 22 by this time and a qualified dressmaker.  They both must have returned to Bristol.  In 1886 Catherine Kate married Albert Charles James in the Barton Regis area of the city.  They had one child Josephine Jessie James in 1887.  On 30th April 1890 Sarah died at Kingston Park, Redland in Bristol aged 67.

George Stone – the Special Drainage District Rate Book of 1876 shows that George Stone was a tenant here.  This would appear to be a temporary arrangement as we know that Mrs Stone moved to Thornbury in July 1875 and the family were living in number 20 Gloucester Road by 1881.  Click here to read more

The Hall family – the 1880 rate book and 1881 census show the house occupied by James Hall, a retired innkeeper, his wife, Hannah and other members of the family.  Click here to read more

The Boulton family – by 1894 the house was taken over by Ann Ford’s mother, Susannah Boulton and her son.  Click here to read more

William James Shepherd – the 1926 rate book shows that William occupied the house.  He had probably lived here from 1916 as he was shown as living in Gloucester Road in the 1916 Prewett’s directory.  He and his wife had moved to Church Road by the time of the 1927 electoral register.  Click here to read more

The Organs – from 1927 onwards the next occupants of the house were Victor Henry Organ and his wife, Sarah A.

Victor was born in 1887, the son of Ernest Herbert Theophilus Paul Organ and his wife, Susannah (nee Barton).  In the 1891 census he is shown as aged 3, having been born in Kington, and was living with his parents in Churngate Farm, Kington.  Ernest was described as a farmer.  By 1901 the family had moved to the White Hart in Olveston.  Ernest was now working as a publican and farmer.  The 1911 census shows the Organs still at the White Hat.  Victor was working as a farmer.

In 1914 Victor married Sarah A. Tanner at Madeley in Shropshire in the March quarter 1914.  Sarah was born in the Thornbury area on 2nd August 1887, the daughter of Robert Tanner a farmer and his wife, Emily.  In the 1891 census Sarah was living with her parents at Brook Farm, Tytherington.  By 1901 the Tanner family had moved to Haw Lane where Robert was described as living on his own mean.  In 1909 Robert died aged 57 and it was just Emily and Sarah who were living at Haw Lane.

We do not know what took Victor to Shropshire where they married.  They settled to live in Olveston where they had two sons, Robert Ernest Victor born on 5th April 1914 and Bernard Rymer born on 23rd October 1915.  A trade directory of 1927 lists Victor as a farmer at Church Farm, Olveston.

The 1927 Electoral Register lists Victor and Sarah as living in Gloucester Road for the first time.  The Council School records also show that in 1927 Robert Organ and Bernard Rymer Organ were enrolled at the school.  They were shown as the sons of Victor H Organ and had previously been to school in Olveston.  Victor died shortly afterwards on 6th June 1928.  The obituary printed in the Western Daily Press dated 13th June 1928 shows he was living in ‘3 Gloucester Road’ which we assume to be the house which became 10 Gloucester Road.  When Victor died he was aged 40 and buried at Olveston, where he had farmed before moving to Thornbury.  The report of his death describes him as being the proprietor since March 1927 of the Thornbury Coal Company.  This was based at Thornbury railway station.

Only Sarah is listed in 1928 Electoral Register and later ones. 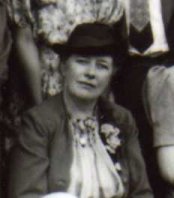 In 1940, the Gazette reports on the marriage of Bernard Rymer Organ, son of Mrs Organ of Gloucester Road, Thornbury to Miss Lily Giles of Yeovil.  We know also that Robert Ernest Victor Organ, their other son, married Amy Green from 3 St John Street (since re-numbered 5 St John Street) in August 1941.  The photo on the right shows Sarah at Robert’s wedding in 1941.  Robert was a journeyman baker at the time.  In July 1942 when he was still living at 3 St John Street, he got in trouble for ‘failing to isolate his pigs from other swine for 28 days after their removal’ for which he was fined £2 5s!

These records do not say specifically that Victor and Sarah were living at number 10, but we know that Sarah Organ, a widow, was living there in 1954.  She is mentioned in the deeds of number 8 Gloucester Road as being the occupier of number 10 which was then still owned by the Hodges Estate.  Electoral Registers show that Sarah lived there until about 1958.

Furthermore, a young local girl, Winifred Webb, had a newspaper round towards the end of World War Two and she remembers delivering newspapers to Sarah Organ at number 10.  Years later, after marrying Ron Jenkins, Win and her husband moved into number 10 house in 1958 and they thought it had been empty then for about 18 months.