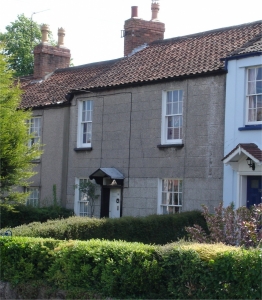 We have not seen the deeds of the house and we have no precise knowledge as to when number 12 was built.  The census taken in 1851 suggests that the house was not yet built.  It was however included in the 1861 census so we have to assume that the house was built between 1851 and 1861.  In an indenture dated 1897 which relates to the property, reference is made to several earlier indentures in 1858 and 1859 which suggest that number 12 was being built at that time.

It is interesting to note the difference between this house and the other houses built in the terrace by John Hodges.  This is the only one with a ‘double front’ i.e. rooms on both sides of the hallway.  (Note that number 22 has a similar arrangement but this house already existed when John started building his terrace).  We don’t know why John varied the specification, maybe it was designed to order because the Census of 1861 shows that John’s son, George Hodges, was the first occupant of the house together with his family.

The 1861 census shows that George Hodges was aged 41 and that he employed five men and two boys.  He was living there with his second wife Tracey who was 32 years old and four children. Hannah Staley was visiting the household at the time of the Census as was Edward Weekes aged 12.   They had a house servant Elizabeth Kinder.  Read more about George Hodges

We know that on 27th August 1858  George’s father John Hodges arranged for the transfer of his property to his children before his death, and ownership of number 12 was transferred to his daughter, Emma, and her husband, John Williams who were living at Gloucester House.  This is confirmed by the 1859 rate book which shows that John Williams was the owner of the house.  John & Emma Williams continued to own the house until their deaths, both in 1897.

Before Emma died, she made arrangements for her properties to be transferred to her son, John Hodges Williams.  John accumulated a large estate of property in central Thornbury – read  more

Following the death of John Hodges Williams in 1934, the property was transferred to his son, Henry William Williams.  Henry moved to London and died in 1960 aged 88.  The properties have continued to be managed by his trustees ever since.

By 1871 George Hodges had moved from number 12 Gloucester Road to number 6 Gloucester Road, often referred to as Laburnum House.  This was a bigger house that he had built at the end of the terrace.

From this time onwards number 12 has been let out to tenants including:

The Pitcher family – the house was occupied by the family of Walter William and Anna Maria Pitcher from 1871 to 1885.  Read more

The 1887 Rate Book shows the tenant as being a person called ‘Young’.

The Tucker family – the house was occupied by George Tucker and his wife, Louise from 1890.  When they died, their nephew, Norman Frank took over the tenancy.  Read more

The Vowles family – the house was taken over by the family of Reg and Edna Vowles from 1962.  Read more