This is a special house to us, the developers of this website, as it has been our home for over forty years.

The drawing of the house shown on the right below was done by Valerie Gregory for the cover of an audio cassette produced by the Thornbury & District Oral History Society.  The cassette contains an interview with George Excell carried out in March 1995.  George had been Town Clerk of Thornbury from 1952 to 1984, and for the early years he had used the back room of his house at number 18 as the Council’s office.  Thus, it became known as ‘The Smallest Town Hall in England‘.

When we started researching the history of the house, we were disappointed to find that our deeds didn’t show anything earlier than a document dated 1947.  We subsequently found from the 1840 Tithe Map that the house and garden formed one of two households on Plot 248, owned by John Hodges.  John was a builder who appears to have acquired a property in 1832, thought to be a house on the site of the present 22 Gloucester Road.  John and his sons went on to build all the houses in the terrace on the land adjoining.

At the time of the 1840 Tithe Survey John was either living in 18 Gloucester Road or the one next door (now number 16); Thomas Longstreet was living in the other house.  Unfortunately we don’t know which house each person was living in.  In the 1841 and 1851 censuses, it is not entirely clear who is living in number 18 or whether it is occupied at all.

Next, we discovered that the deeds of numbers 8 Gloucester Road and 10 Gloucester Road both contain copies of an indenture dated 14 August 1865 which relates to our property.  Reference in this document is made to an earlier indenture of lease and release of 23rd and 24th August 1832 which shows the land was being conveyed by James Ford to John Hodges.  So we have to assume that 18 Gloucester Road must have been built by John Hodges at some time between 1832 and 1840. 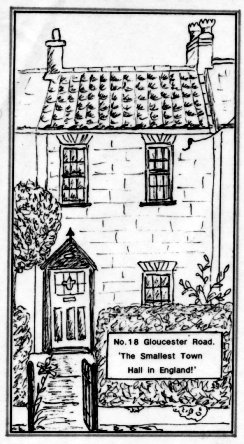 In the 1861 census, it looks fairly certain that John Hodges was living in number 18 with his new wife, Hannah (nee Ball).  He was described as a licensed appraiser aged 75.  Hannah was aged 76.

The 1865 indenture referred to above showed that John was passing some of his properties, including 18 Gloucester Road, to his son, George Hodges.  George carried on as owner until his death in 1905.  In his Will, George arranged for Trustees to manage the property.  The trustees were initially his four surviving daughters, Sarah Ann Hodges, Fanny Staley Hodges, Emma Jane Hodges and Laura Evelyn Balls and one of his two surviving sons, Austin Edgar Hodges.  Over the years, these Trustees gradually died off and new ones were appointed to ensure that the Estate was managed properly.  The Trustees continued to own the property until 1947 when it was sold for the first time.  Click here to read about George Hodges and his Trustees

There is an advertisement in the Gloucester Gazette of 15th February 1947 which gives us the following detailed description of the house at this time:

‘Valuable freehold house and garden situate in Gloucester Road, close to the bus terminus and shops and lately occupied by Mrs F. C. Hopkins, deceased.  The house is stone built with tile roof and is one of a terrace.  The accommodation comprises lounge, dining room, kitchenette with dresser and sink, pantry, three bedrooms and underground cellar.  Open shed at the rear. Company’s Gas, Electricity and Water.  Main drainage.  Small lawn at front and garden at rear stocked with good plum trees‘.

The Excells – George and Joan Excell owned the house from 1947 to 1970.  During this period it became known as ‘the Smallest Town Hall in England’.  Read more about the Excells

Bev Selman – in June 1970, the house was conveyed by George and Joan Excell to Arthur William Beverley Selman of Pullins Green.

‘Bev’ was the son of Bill and Lena Selman who were living next door at number 16.  Read more about Bill and Lena

Bev was actually William Arthur Beverley and his birth was registered in the Weston area in 1938.

In 1960 Bev married Sheila M Gardiner.   Joan Excell told us that because Bev did not have a job at the time, the Selmans asked her and George to sell the house to Bev.  Joan said that they came to ‘an arrangement’ because they liked Sheila, Bev’s wife, so much and said that she came from a nice family.  Bev seems to have paid them something and then paid a sum each month.  This is largely confirmed by a document that we found in the deeds, which says that Arthur William Beverley Selman agreed to pay back to George two thousand four hundred pounds at the rate of nine pounds ten shillings per centum per annum.  It was to be paid in equal monthly sums of 30 pounds on the 19th of each month. We were not sure what Bev’s trade was but he seemed to be a trader who bought and sold all sorts of things.  As a young man he had worked for Wilkinsons, a bakery in St John Street delivering bread.  In the period around 1969 Bev advertised as a window cleaner in the Outlook Magazine produced by the Thornbury and District Community Association.  At that time his address was Resthaven, Pullins Green.   The 1970 electoral register confirms Bev and Sheila Selman were living in the Bottom flat, 3 Pullins Green.

We heard later he had moved to South Bristol to run a bakery with his new wife.  When we saw him last, he was living in Hartcliffe, travelling around in a succession of converted ambulances and selling ‘antiques’ at car boot sales.  We liked Bev very much and found his stories very funny.  He also gave us one useful piece of advice that we have not yet been able to use.  Apparently if you are ever chased by the police in a car, you should find a ploughed field to run across as the police don’t like to get their boots muddy and won’t follow.  This was before they had police helicopters!  We have no idea how he came by this information.  He also tried tried to sell us an ambulance because they are very good for getting through traffic jams or for holiday homes. 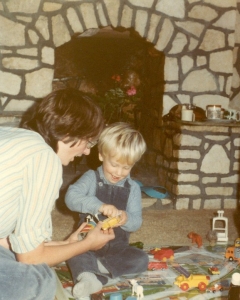 1984 Bevs fireplace with people in the way

Bev did not keep the house long.  In the short time he was here he did undertake some improvements.  He ripped out both the old Victorian fireplaces and surrounds, and in the sitting room built an enormous fireplace out of Cotswold stone (which was in fashion at the time).   The fireplace in the dining room was on a smaller scale.

We have traced Bev to when he was living near Bristol, with his wife, Jacqueline in the late 1990s.  We have just discovered that he still comes to Thornbury and we have been hoping to meet with him.

The Hemmings – in August 1971 the house was bought by Roy Anthony Hemmings of 18 Wye Court, Thornbury.  The cost was £3,900.  Roy and his wife, Gill, were a newly married couple from Fishponds in Bristol.  They had moved to Thornbury when Roy commenced work in the Work Study Section of the Engineer & Surveyor’s Department of Thornbury District Council.  Before buying number 18, they were living for a short period in a council flat at 18 Wye Court.

In 1973, Roy transferred to a similar job in Newtown, Powys.  They sold the house to Roy’s boss, Chris Doig.  After a few years in Newtown, Roy began studying for a theological degree at the University of Wales (Cardiff).  When he graduated, the family moved to Rhyl in 1986  where Roy became a deacon, then a curate at St Anne’s.  In 1990, he joined the Army as a chaplain, and served several years in Hong Kong and Germany, and then after returning to the UK, he served overseas for shorter periods, including spells in the Balkans.

The Doigs – Chris and Sandra Doig have owned the house since 1973.  It was in this house that we brought up our two sons James (born 1980) and Patrick (born 1982).  In 2004, we started researching the history of our house in Gloucester Road following an approach by a member of Thornbury Museum.  This resulted in us joining the Thornbury Museum Research Group that meets the first Thursday of each month at United Reformed Church in Chapel Street.  We soon found out a lot of information about the house and adjoining houses.  We realised that the information could be of interest to people researching the history of families who might have lived in the houses.  In 2005 we developed out first website dealing just with the ‘History of Laburnum Terrace’.  By 2006 we had collected an extensive amount of information about other areas of Thornbury and we created Thornbury Roots.

Read about the tenants in this house
Toggle Sliding Bar Area