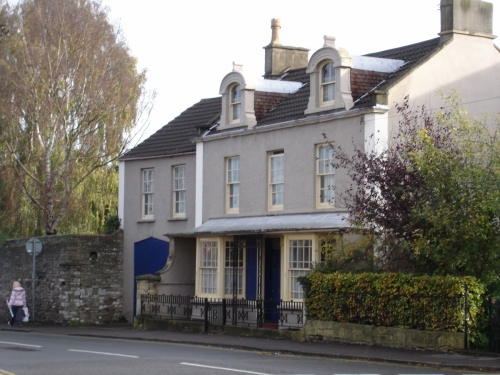 The Tithe Apportionment that accompanies the 1840 Tithe Map shows that what is now Gloucester House in Thornbury was located on the plot of land referred to as Plot 244.  There was no building on that land in 1840.  It was just a garden at that time.  The garden was owned by James Ford, a maltster and rented by Aaron Marsh, a glazier, tin-plate worker and brazier.

Aaron Marsh – it is not possible to say for certain which Aaron Marsh rented the property to use as a garden, but we believe it was Aaron Marsh junior.  Aaron Marsh senior was born about 1772 and would have been rather old by 1841.  Aaron and his wife Leah Marsh had a son called Aaron Burchell Marsh in 1814 and he would be more likely to be carrying on the business at this time.

John Hodges – an indenture dated 24 August 1852 shows that a builder called John Hodges bought the garden land in Gloucester Road from James Ford and built a house and other buildings on it.  This is the house that later became known as Gloucester House.  The indenture has a reference to a prior transaction of 26th March 1842 between James Ford, John Hodges and George Scarlett the younger.

We have provisionally assumed that this earlier indenture describes the transfer of land from James Ford to John Hodges and gives us a slightly better picture of when the house was built; at some time between 1842 and 1851 when Emma Hodges (the daughter of John Hodges) married John Williams and the couple moved into it with her father in an adjoining property.  We believe they were the first family to live there.

We know something already about John Hodges whose family built many of the other houses in this part of Gloucester Road.  Although we haven’t seen the relevant indentures, John took steps before he died in 1877 to divide his property between his two surviving children, George and Emma.  He gave John and Emma Williams several of his properties including 2 Gloucester Road.  The 1859 rate book shows John Williams as the owner at that time.  Read about John Hodges

The 1851  census is confusing.  There are very few houses listed and no vacant houses indicated.  It is difficult to say with any certainty who is living in which house.  However, a shared household would explain the entries in this census.  John Williams was the first householder in what was then known as “Collisters Lane” after the Census enumerator left St John Street.  In this household John Williams was aged 27 and a master tailor born in Thornbury and his wife Emma was also 27 and also from Thornbury.  In the household next to them was John Hodges widower aged 65 who was a builder employing six men.  Presumably these two households were both in what is now Gloucester House and that must have been why there is no number 4 Gloucester Road.

On 5th January 1866 the minutes of the Thornbury Union reported that a nuisance existed on the premises of John Williams, a tailor of Gloucester Road, caused by a pigsty.  The Relieving Officer was instructed to inspect and inform Mr Williams of the requirement to abate the nuisance.

The rate books of 1890 and 1894 show that John Williams was the owner of this house, the buildings and land next to it as well as the workshop used by Emma’s brother, George Hodges.  John and Emma Williams continued living in the house up to the time of their deaths, both in 1897.

The 1905 and 1910 rate books show that the house was then owned by John Hodges Williams and occupied by John Henry Williams.  The property, along with other properties in the William’s estate, was passed from John Hodges Williams on his death in 1934 to his son, Henry William Williams.  We do not know when Henry sold it and who owned the property in more recent years, except from 1970 to 2000 when it was owned by Ken and Kate Wilkins.

The naming of Gloucester House – the first record of the property being known by this name that we have seen is a handwritten agreement written by the Williams family (or their solicitor) in 1894.  Thus it would appear that the name was used shortly after the adoption of the name of Gloucester Road.  It is found later in the parish records referring to the baptism of John Arthur Merrick Williams on 11th April 1902, and was later used regularly in trade directories.

House numbering: there was no official numbering of houses in Thornbury until about 1952, although some houses within terraces were given numbers earlier. Our earliest reference to Gloucester House being No 2 Gloucester Road is the 1954 electoral register.  The maps drawn from the 1950s show the property to have two numbers Nos. 2 and 4.  Presumably this was because the house was once split into two units and used as separate dwellings.

Go to Occupants of this house
Toggle Sliding Bar Area