Some Notes by Ken Wilkins We are grateful to Ken Wilkins for the following notes on this house;

“Gloucester House, 2 Gloucester Road, Thornbury, Gloucestershire.  Whatever happened to No.4?

We moved into Gloucester House, No.2 Gloucester Road, Thornbury in January 1972!  The house had been unoccupied for about two years and,what with its black painted woodwork and uncleaned windows it looked a sad sight.  A Mr Till had bought the house with the intention of moving to Thornbury with his wife but, shortly after buying the house, Mr Till died leaving his widow in the Didmarton area.

When we first really noticed Gloucester House we were living in a modern detached house in Church Road, Thornbury and already had decided that we would like to move to a house with more room and character.  Each time we walked up Gloucester Road to the town we would have to pass by the empty, old house and our curiosity and interest increased with each passing week.  At that time Kate worked part time for Morris & Co. the local auctioneers and valuers, and Morris were asked to find out who owned the property and whether there was any interest in selling.  The result was a little surprising in that old Mrs Till hardly realised that she owned such a property but was willing to sell and, after agreeing a price with the help of our separate agents, we bought Gloucester House.  Mr Judd of Castle Street was our solicitor! 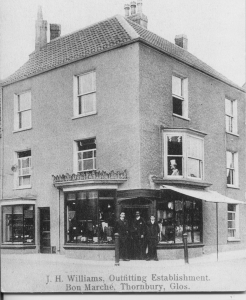 The sale proceeded quickly even though the deeds proved difficult to find (Mr Till had departed rather too suddenly it would appear!), and Mrs Till allowed us access to the house long before completion.  Consequently, work started on the house in November 1971!  Painting,decorating, improvement!  Mr Clark of Elberton did the building and internal decorating jobs (though we have to thank our friends Messrs. Protheroe and Silcock for significant help in re-decorating the bedrooms), Mr Elton of Winterbourne re-wired the house and installed the central heating system, and Rentokil Ltd. treated the entire house for woodworm and rot.  The outside walls and woodwork were also painted, but the rubbish and filth in the basement was left for me to clear later.  However, we did make a start to clear the garden of its years of accumulated weeds and bottles.  The last person to live in the house, as a tenant, was a Mrs Williams who took in lodgers, mainly young police cadets who were attached to the Thornbury Police Station.  The bottles, it seems, once belonged to them!

When the old wallpaper was stripped off the walls it. was clear that a lot of changes had taken place over the years.  The outlines of doors on the plasterwork, a changed shape showing an archway that was now a door, and so on.  Curiosities at the time of which we did not make a note – and we are not inclined now to tear off the wallpaper to check them out.  In the attic there was a fireplace under the stairs the line of a previous staircase, and very old peeling wallpaper; in both attics there were the remains of exterior walls – and dormer windows in No.4, and out in the garden at the rear of the house there were the remains of wall- foundations. (See an aerial photograph circa 1925 to see what the rear of the house looked like then). Clearly the house we now owned had “developed” and had looked quite different at one time, and there were clues that might help to trace the changes. 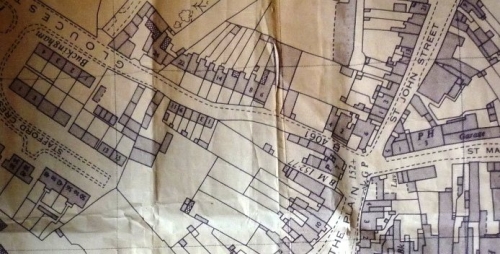 One of our first visitors was Mr Fudge from Castle Street, a gentleman past middle age.  He introduced himself as being once the agent for the Williams family who had owned, lived in Gloucester House, and who had owned other properties in Thornbury.  He told us a little of the history of the house.  Mr Williams was a tailor whose workshops were based in Gloucester House.  He made clothes for both civilians and soldiers.  The shop on the corner of the plain, now Owens the florist, was the place where his work was displayed; Mr Fudge reckoned that he could remember the time when suits were hung outside the shop on a rain.  He recalled that at some time (1940,s?) a quantity of trimmings and buttons for the military uniforms of the Gloucestershire Regiment had been found in the house and given to Bristol Museum.

The layout of Gloucester House was different in those days, with both living quarters for the family, and rooms for offices and workshops which extended back towards the garden wall.  The tall window on the landing was, once, a doorway which led to the workshops, and the rooms in the attic were accessible by a staircase.  According to Mr Fudge significant changes to the structure of the house occurred in 1936, and this might have been confirmed by some scribbling found on the upstairs walls at the time of re-decoration.  Sadly, the message was noticed in passing but not recorded.  We might have asked Mr Fudge for more information and,although we met him in town on occasions, we did not pursue the matter.  The attic provided proof that tailoring or sewing had taken place because under the floorboards it was possible to find pins,press studs, buttons and other small items associated with the trade.

Our interest in the history of the house dwindled as we got on with the business of bringing up our children and earning our living,though from time to time something came to light which stirred our interest once more.  One such occasion was when various lands belonging to the Thornbury Castle Estate came up for sale and the brochures, complete with maps/ were published.  It was the first time that we had seen a large scale map of Thornbury and this was an old map.  When we looked at our house it showed not-one house but two; a smaller No-2 Gloucester Road attached to No.4 Gloucester Road. It appeared that our garage with the two bedrooms above was once No.4 Gloucester Road, which explains why, now, there is no house between ours and Laburnum Cottage, No.6 Gloucester Road.

The Hole in the Wall – the wall by the garage door has also been the subject of some speculation.  One person said that the round hole in it used to hold a clock and wondered if it was the clock that was the subject of a discussion for the Jubilee.  Arthur Neale said he could not remember a clock there and the clock in Worthington’s was the Jubilee clock.

In November 2005 Ken Wilkins  told us he enlarged the hole himself by clearing away loose stones but feels that it was a window or ventilation hole for the outside privy which was on the other side of the wall in the garden.

Ken’s theory is that the outline of a small door can be seen in the wall at ground level directly below the hole.  The toilet in the garden was above the door.  This meant the bucket underneath the toilet was accessible from the door and could be emptied by the night soil man.

We have heard about the night soil man whose job it was to empty these buckets in Thornbury and have been told that a man whose name was “Muppa Webb” did this job at one time.  We would like to hear from anyone who has more information on this point.

The Wilkins sold the house in June 2000.