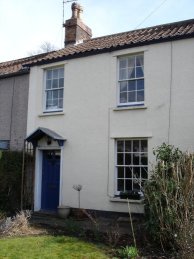 The numbering of houses within streets in Thornbury was not introduced generally until the early 1950s and so this house was only then called 20 Gloucester Road, but there were numbers allocated to the houses in the terrace from a lot earlier.  This house was originally described as ‘7 Laburnum Terrace’.

We have no precise knowledge as to when number 20 was built.  It may have been built originally as an extension to No. 22.  This idea is supported by the fact that the present owner of number 22 has said that within his house he has found two areas in the party wall that look like doorways into number 20.  We think John Hodges whose family  built this terrace of houses bought No. 22 in 1832 as we have discovered a reference to an indenture between John Hodges and James Ford dated 23rd & 24th August 1832.  We have not been able to trace a copy of this indenture.

The 1840 Tithe Map and accompanying Tithe Apportionment show that the property at Plot 249 covers what is now numbers 20 and 22 Gloucester Road and describes it as “a house, stables and garden and covers 18 perches.”  The significant word here is “House”.  This would appear to be confirmation that in 1840 the two houses were joined.

Plot 249 is shown as being owned by John Hodges and occupied by Charles Ford.   This may be the same Charles Ford

who is shown in the 1841 Census as the beer-house keeper in what is now ‘The Royal George’.

It is not easy to link the houses shown in the 1841 census with the existing houses.  There are only three houses listed in the terrace.  We believe the first house listed is likely to be the house described as Plot 249 on the Tithe Map (i.e. now known as 20 & 22 Gloucester Road).

If we accept that the house which is now number 20 was then part of number 22, it would seem that this house was occupied by John Hodges the carpenter and builder who came to own the whole terrace, and his wife Sarah.  Their son, George also a journeyman carpenter, and their young daughter, Emma, were living there as well.  They seem to have had a lodger Richard Cowle aged 25 a carpenter journeyman, whom we suspect was an employee of John Hodges.

In the 1851 census, the detail shown is even harder to interpret with any confidence and we hesitate to make any assumptions as to who was occupying which house.  At this time, John Hodges appears to be sharing Gloucester House with his daughter, Emma and her husband, John Williams.  There are only two other families listed, one of these being that of George Hodges, the other, Sarah Nicholls, a landed proprietor from Littleton.

The house stayed in the Williams family until 1983.  Following the death of John and Emma Williams, both in 1897, their estate was passed to their son, John Hodges Williams.  John was already a successful businessman.

In due course, the house was transferred to Henry William Williams, son of John Hodges Williams.  We have not found out when Henry William Williams became the owner but we have some indication as we found the records of the Pitcher family business held in the museum.  These include two invoices.  One shows that in 1934 the Pitchers did some work for John Hodges Williams at the Beard’s house (which we know to be number 20 Gloucester Road).  It was described as “a 10 gallon furnace pan which costs 9s 4d plus labour 2s 6d (1½ hours work).” There was also an invoice dated the 31st July 1934 which says “G Beard’s providing and fixing new galvanised boiler pan as agreed £1.5.0”.  This was charged to Mr H W Williams.  This implies that the property changed hands about this time.

Henry W. Williams had run a grocer and tea dealer’s shop at ‘The Golden Key’, Thornbury and eventually became the owner of much of the ‘Williams’ property in Thornbury including the properties in Gloucester Road.  Henry moved away from Thornbury although he kept his interest in the properties here.  He and his wife moved to Southgate in Middlesex.

On 21st June 1975, Ada Williams passed her trusteeship to Frances Williams, who appeared to be the wife of John Merrick Williams.  John Merrick and Frances Theresa Williams were living at 14 Beaufort Road, Clifton in 1983 when the house was eventually sold to Philip and Carol Walker.

The Walker family.  On the 19th August 1983, after the death of the tenant, Mrs Beard, the property was then bought by Philip Walker and Carol James.  Philip and Carol were a young Thornbury couple who moved into number 20 immediately following their marriage.  Philip had lived in North Road and drove a heavy lorry from Tytherington Quarry.  Carol was a midwife and had previously lived in Hillcrest.  They had to do a lot of work to modernise the house which had been neglected for many years.  In 1984 they had a major extension to the house involving the demolition of the single storey kitchen and bathroom and replaced it with a two-storey building.  Philip and Carol had two children whilst living here before moving to a larger house nearby.

The McGonagel family  On 24th November 1992, Philip and Carol sold their house to Andrew and Catherine McGonegal, who had been living in Lavender Close in Thornbury.  Andy came from Yorkshire and was a civil engineer who worked on several major local projects, including the Second Severn Crossing, the Avon Bridge and the new water treatment plant at Purton.  Cathy was a GP who worked at the local health centre.

Cathy and Andy had three young children, Tom, who was the quiet one of the family, Jamie who was rather more assertive and Ellie who was quiet but determined.

Andy made a huge construction at the bottom of the garden of railway sleepers and concrete for the children to play on.  It included a shed for Andy and slides for the children and even an underground cellar with cut-off plastic drain pipes to hold wine bottles.  Some of the older neighbours watched with baited breathe as little Ellie who could only just walk, followed her brothers when they climbed.  It was never quite finished but was indestructible – like the children.  It remained until 2003 when new owners arranged for its removal.  Parts of it are still there underground, waiting to puzzle future archaeologists.

The McGonegals moved to Saffron Waldon in 1996 because Andy was tired of being away from home or commuting to London.  He was then working on the construction of the new Treasury Building opposite the Houses of Parliament.

The Curtis family.  The house was bought by Neil and Sarah Curtis.  Neil was another civil engineer and Sarah was a personnel officer.  They had one baby, Max, whilst living in the house.  They sold the house in December 2002 and moved to Castle Street.

The Day family.  The new owners were Raymond and Barbara Day.  They moved to Thornbury in 2002 from Clifton.  They had originally come from London, having moved to live in Somerset for some years before moving to Clifton.