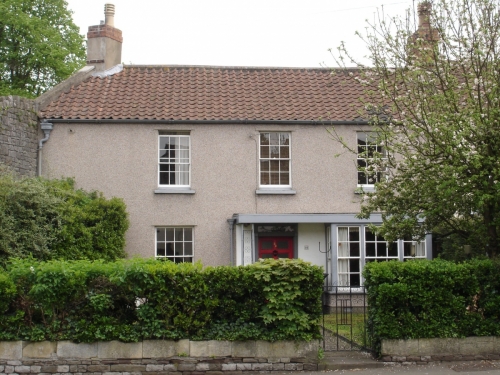 We don’t know exactly when number 22 Gloucester Road Thornbury was built and we have not yet been able to see the deeds which may have more details.  The Algates who lived in the house in the 1970s remember being told the house was built in 1812 but they can’t remember the source.

Number 22 is different from the other houses in the terrace, in many ways.  Read about the building

The house is also the only in the terrace not built by the Hodges family.  We think John Hodges bought the house in 1832, probably having rented from James Ford since about 1824.  We have discovered a reference to an indenture of lease and release between John Hodges and James Ford dated 23rd and 24th August 1832.  This would appear to confirm that the house was built earlier than 1832, but we have not been able to trace a copy of this indenture.  The Land Tax records of 1825 and 1826 show that John Hodges was renting a property from James Ford and it is possible that this includes the same house.

We suspect that after John bought number 22 and the land adjoining, he set about adding houses and building the terrace.  We know the house was there in 1840 when it was shown on the Tithe Map as being part of Plot 249.  This plot covered what is now numbers 20 Gloucester Road and 22 Gloucester Road and was described in the accompanying details as “a house, stables and garden and covers 18 perches.”

The significant word here is “House”.   This would appear to confirm that in 1840 the two houses were joined.

Plot 249 is owned by John Hodges and occupied by Charles Ford.  This may be the same Charles Ford who is shown in the 1841 census as the beer-house keeper in what is now ‘Mezze at The Royal George’.  The adjoining Plot 248 shows that two more houses had been added to the terrace and that John had moved to one of the new houses.

The 1841 census shows three households in the terrace.  It would seem that John Hodges, the carpenter and builder who came to own the whole terrace, and his wife Sarah had now moved back into number 22.  Their son, George also a journeyman carpenter, and their young daughter, Emma, were living there as well.   They had a lodger Richard Cowle aged 25 a carpenter journeyman, whom we suspect was an employee of John Hodges.  One of the new houses (we think number 18) was uninhabited at the time of the census but John’s elder son, James, and his wife Charlotte were living in the other one.

In the 1851 Census, it is not clear who is occupying which household but we have found supporting evidence to make some assumptions.  John Hodges had moved from number 22 about this time to Gloucester House which he also built and is sharing it with his daughter, Emma and her husband, John Williams.  We know from an indenture of 1852 that John Hodges shared the house with John and Emma Williams and had even divided it into two separate households.

There are only two other families listed in the census as living in that part of the road in the census, one of these being that of George Hodges, the other, Sarah Nicholls, a landed proprietor from Littleton.  It seems likely that John’s son, George Hodges, who married in June 1850 stayed in number 22 with his new wife.

John and Emma Williams continued to own the house until their deaths, both in 1897.  Before Emma died, she made arrangements for properties to be transferred to her son, John Hodges Williams.

In 1914 John sold the property to Samuel William Gallop Dennis for £440.

Cyril and Hilda Williams – owned the house from 1965 to about 1972.   There was no connection between Cyril and the family of John and Emma Williams who had owned the property earlier.

Cyril Mark Williams was born in Thornbury on 11th January 1911.  He was the youngest son of Alfred Williams and his wife Ruth (nee Morgan) .  The family were living at 13 Castle Street when Cyril started at the Council Upper School in 1919.

Cyril married Hilda Clarice Allen in Thornbury in 1933.  Hilda was born on 11th October 1913, the daughter of Luke Allen and his wife, Kate Ellen Day.  Cyril was a builder who had worked as an apprentice with Jack Hodges in Castle Street.  He later set up his own business in conjunction with a friend, before branching out on his own.

On 29th April 1936 Cyril and Hilda bought 27 St Mary Street and moved to live there.  They had previously been living at The Pound, Oldbury.  During the Second World War Cyril worked as a Special Constable.

Cyril and Hilda continued to live in 27 St Mary Street until they moved to Selwood, 22 Gloucester Road about 1965/6.  After buying the house, Cyril set out about a number of changes.  It is interesting to note that all the applications to local council to obtain approval were made in Hilda’s name.  We can’t explain this.  In January 1966, they made an application for major changes to the internal layout of 22 Gloucester Road.  This included moving the staircase.  Cyril and Hilda seem to have continued living in St Mary Street whilst this work was done.  In November 1967, they were granted a right of way allowing vehicle access to the rear of the property where they had recently built a garage.  In December 1968 approval was granted for the erection of a bay window and porch on the front of the property.

Cyril and Hilda acquired several other properties in Thornbury, including number 14 Gloucester Road.  They continued to own 27 St Mary Street and let the house out to tenants.  It was acquired by the Council for the town centre re-development on 8th May 1969.  They paid £850.  We have been told a few little stories about Cyril which show he was head of his time, at least with regard to re-cycling.  He had a reputation for not letting anything go to waste and for using features being replaced on one building on a different building on which he was involved.  It was interesting to see that the agreement he had with the Council over the sale of 27 St Mary Street reserved his right to have ‘the oak front door and the heart shaped stone erected over it’.  We would be interested in hearing where these features ended up!

Around 1972, Cyril and Hilda moved down the Gloucester Road to live in one of his two properties at Millpond Cottages, Morton.  A Thornbury man, Ken Worsley, who did some work for Cyril, remembered that he was asked to design alterations to Cyril’s properties at Millpond Cottage when Cyril moved there.  Cyril died on 26 December 1995 aged 84 years, and Hilda on 7th April 2004 aged 90 years.  Both are buried in Thornbury Cemetery.

The Algate family – Roger and Janthia Algate acquired the property about 1972.  Roger was a primary school teacher in Thornbury.  Janthia was a planning officer.  They rented out the house for a couple of years whilst they had a period in Germany where Roger was teaching service families.  During this period the house was let out, first to a young couple, Jeremy Coles and Jeanette Liddell, and then to a colourful couple, Mollie Benson-Cowell and Edward (Teddy) Cowell) and their two lively dogs who badly damaged the woodwork inside the house.  When Roger and Janthia returned from Germany, they got jobs in South Molton, Devon and moved to live there.

The Bowen family – Jeff and Lin Bowen acquired the property from the Algates in 1984.

We have written about the interesting aspects of the building itself and about the Spite Wall.