The house that became number 22 Gloucester Road in Thornbury was rented out to tenants during the time it was owned by John Hodges and the Williams family.  We have traced some of these families.

The Young family – in 1861 the house was occupied by the Rev John Young, the minister of Falfield Independent Chapel, aged 46, his wife Ann Harris Young aged 36 and their four children, Mary, Charles, Emily and Arthur.  They had moved from Devon as in 1851 they appeared in the census of that year for Chumleigh.  In 1851 they had two children Edward aged 7 and Philip aged 4.  The family had moved away by the time of the 1862 rate book and the 1871 census shows the family had moved to Crookham Common in Hampshire.  This mobility seems to be the tendency among Independent ministers.

Sarah Beard – the 1862 rate book shows Sarah was living in the house.  She had left by the 1867 rate book.  Read more about Sarah

The Long family – in the 1871 census, the house was occupied by the Long family.  Edward Long aged 38 was a surgeon who was born in Berkeley.   The census entry refers to him as surgeon (King’s College).  His wife Elizabeth aged 37 was born in Rushy.  They had a 22 year old  lodger called Emma Day who was a housemaid and another lodger called Thomas Stinchcombe who was aged 16 and an errand boy born in Grovesend.  Frederick Johnson aged 20 was a third lodger. He was a groom from Kilpeck in Herefordshire.  We believe that these last three lodgers were likely to have been live in servants for the Long family.  Edward Long had an interesting and tragically short life.  Read more about Dr Edward Long

Stephen Jenner.  The records we have show that the house changed hands quite quickly for a while.  Dr Long died in 1874 but the 1876 the records in the Special Drainage Rate Books show that another tenant had moved into John Williams’ house.  This was Stephen Jenner.  It seems likely that Stephen was also from Berkeley and he may have been the son of Henry and Susannah Jenner.  If this is the case Stephen Jenner who was an artist died in 1881.

The house was unoccupied in the 1881 census but the 1885  Rate Book had yet another tenant, Mrs Jacobs.  Although Jacobs was the name of a family living in Thornbury in the eighteenth century we can find no trace of some one of that name in Thornbury at this date.

The Martin family – the 1890 rate book shows that the tenant was Cecil Martin and in the 1891 census, there are more details about the family.  Cecil Edward Martin, then aged 27, was a superintendent of a life assurance company who was born in Handborough, Oxon, and his wife, Martha, aged 31 from Croperby, Warwick.  We know from the 1871 census that Cecil was the son of Henry Martin, who was a land surveyor in Woodstock, and his wife Emma.  By 1891 they had three children, Ruby Cecilia Mary aged 5, and Norman Charles H. aged 3 both born in Kidlington, Oxon and Madelaine Golby aged 1 who was born in Thornbury.  This suggests the family probably moved into the house about 1889-90.   Another daughter, Victoria Maud Muriel was born in Thornbury in 1893.  The family appear to have moved away by the time of the 1894 Rate Book.  A son, Lionel Lever Martin was born in Wotton Under Edge in 1898.  We can’t trace them in the 1901 Census, but by the 1911 they were living in Reading.  This shows that they must have been living in Reading in 1901 when Gladys Viola Elizabeth was born in 1901 and when Sibyl Cora Alexander was born in 1907.

John Joseph Hookway Carey of Pill married Clara Mary King of Thornbury on January 7th 1892 at the Congregational Church.  The Thornbury Family Friend Magazine of 1892 reported that Miss King received a wedding present of a “handsome timepiece” engraved “presented to Miss Clara King on her marriage by the teachers, choir and friends of the Congregational Church as a token of loving esteem.”

Clara King (shown in the photo on the left) was the daughter of Charles King the ironmonger and they lived at 23 High Street.  The records of what is now known as the United Reformed Church in Thornbury show that Charles and Ann King had two children baptised; Selina Ann born on 25th September 1852 and Clara Mary born 10th September 1859 both were baptised on 22nd March 1863.  In 1891 Clara was 31 years of age and a schoolmistress.  She and her sister, Selina Ann King, seemed to be running a Preparatory School in the High St according to various Trade Directories.

The birth of their son Charles Hubert Carey was registered in Thornbury in the first quarter of 1893. 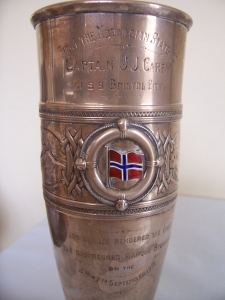 The accounts of the Tucker Brothers show that Mrs Carey was charged £1 6s 6d for packing and hauling furniture to Bristol 14th July 1900.  In the 1901 census we have found that the Hookway Careys had moved to Bishopston in Bristol.  Clara is living at 36 Cricklade Road in Bishopston.  John Joseph is not present in the census but as he is a ship’s captain and she still describes herself as “married” we assume that he was at sea.  Their son Charles Carey was staying in Thornbury with his grandfather Charles King aged 73 and a widower.  Charles King was a tin plate worker and shopkeeper.  Charles King’s daughter Selina also lived in the household.  She was aged 48 and was an unmarried schoolmistress.

We have a copy of an article taken from the Gazette dated 19th February 1916.  It says that the King of Norway had awarded a silver cup to Captain John J. Carey, master of the Bristol steamship “Bristol City” in recognition of his services in rescuing the shipwrecked crew of the Norwegian “Storesand” in the North Atlantic.  The engraved cup is shown in the thumbnail photo on the right.  We also know that Captain Carey was at one time the master of the “Boston City” of the City Line of steamers.

John Joseph Hookway Carey of Maurice Road St Andrews in Bristol died on 6th August 1927.  Probate was granted to his son Charles Hubert Carey and to George Tucker of Thornbury a builder.  His effects were valued at £5,558 11s 2d.

The Gazette of December 14th 1935 reported the death of Mrs Clara Carey the widow of Captain John James Carey.  The funeral took place at the David Thomas Memorial Church in Bristol and she was interred at Canford Cemetery in Bristol.  The article said that Mrs Carey and her late sister Mrs Wilmot had taken an active interest in the Thornbury Congregational Church while she was living in Thornbury.  The mourners included Charlie Carey (her son) and Mrs C Carey (daughter in law) and their children Marjorie and John Carey.

The Moore family – the records of Tucker Brothers show that Mrs John Williams paid for work done on the house in September 1898.  At this time the tenant was “Mr Moore”.  The 1899 the rate book and 1901 census show that Arthur Oliver Moore had moved into the house with his wife, Kate, four children and his mother in law, Ann Murrell.  Arthur was aged 43, a Congregational Minister who had been born in St Paul’s, Bristol.  Kate was aged 42 from St Georges in London.  Their children were Winifred aged 17, a dressmaker born in St Pancras, London, May aged 14, born in Hanley, Staffordshire, Percy B aged 8 born in Nottingham and Elsie B aged 5 born in Stalbridge, Dorset. 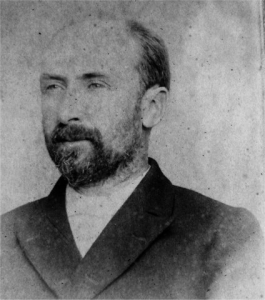 Arthur married Kate Murrell in Marylebone in 1882.  He appears to be another very mobile Independent minister.  He was a theological student in Laxton in Nottinghamshire in the 1891 census.

In 1897 Arthur had been living in Pullins Green.  The 1898 Wrights Directory lists him under St John Street.  He is shown in various directories as being a Congregational Minister for what is now known as the United Reformed Church.  The photograph shown here of the Rev. Moore is that which is displayed in the United Reformed Church in Thornbury.  The family continued living in number 22 Gloucester Road until 1905.

The 1911 census shows Arthur had moved to Glenparva, Leicestershire.  By 1918 he was living in Milverton Street, Birmingham.  He was living at 12 Benn Street, Rugby on 25th February 1942 when he died.

read about the history of the house
Toggle Sliding Bar Area