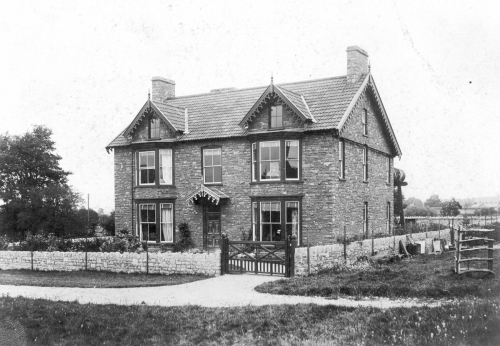 The photo above was taken between 1891 when Shen was built and before 1895 when West Shen and The Elms were been built alongside.

Edmund Cullimore had acquired a large plot of land on the edge of the town in 1886 to enable him to build a saw mill and his own house sited a short distance away from the sawmill.  He also sold to Walter William Pitcher a plot of land containing one rood and 25 perches on 5th July 1888.  We suspect it was Walter and his firm of builders who had constructed the Shen and the two adjoining houses for Edmund.  Walter built his own house on this plot which became 24 Gloucester Road.

Edmund was one of Thornbury’s best known residents, running the Saw Mills and the Brickworks, the two largest businesses in the Town employing large numbers of men.  Edmund was also very active in the areas of the town’s life serving as a member of several public bodies and was instrumental in the introduction of electricity to the town and the opening of the Cinema.  Edmund lives in the house from the time it was built until his death in 1941 and his family carried on living their for many more years.  Click here to read about Edmund Cullimore 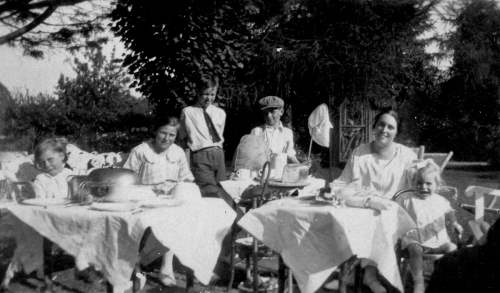 Tea on the Tennis Court

The Museum has a collection of photographs showing the family at parties held on the lawn opposite the house that was used as a tennis court or in the gardens behind Shen and West Shen.  Other photographs of groups of local children in a variety of costumes show that in addition to the normal social gatherings Shen obviously was the venue for pageants and similar events.   Edmund’s daughter and her husband, Helen and Frances Grace, were also heavily involved in theatrical productions performed at the Picture House.

About 1980 Gareth Johnson who was living with his parents at The Elms recalls being surprised one day to see Ronnie Corbett and Ronnie Barker walking up the drive.  Apparently they were in Thornbury filming a series called ‘The Worm that Turned’ for their show “The Two Ronnies” and some of the shots for the show were filmed on the tennis court and around the garden of Shen.  The shows can still be seen on YouTube.

Dennis and Elizabeth Haley – in August 1938 Edmund’s grand-daughter, Elizabeth (the daughter of Frances Henry and Helen Garfield Grace) married Dennis Haley in Thornbury.  They had several children and their baptism records show that Dennis and Elizabeth were living at Shen.  On 5th June 1942 a daughter, Penelope, was born at Almondsbury Hospital and baptised in Thornbury on the 25th June.  The baptism records shows that Dennis was a pilot officer (volunteer reserve) at this time.   On 5th November 1944 their son, Jonathan, was baptised. The godparents were Lyndon and Kathleen Hawkins who were living at the Elms and Marguerite Grace who was Elizabeth’s sister.

When another son, Francis, was baptised on 21st March 1948 (he was born on 18th November 1947), Dennis was described as ‘timber merchant’ so it appears that he had taken over the running of the Saw Mill.  Another daughter, Angela, was born on 7th June 1949 and baptised on 11th September.

The Haleys continued living at Shen until at least 1954, but there is no sign of any Haleys in Thornbury after that date.  We understand from Sally Gordon’s interview that the family moved to Kidderminster.

In the sale Shen was described as having three floors.  The ground floor had a ‘capital hall with a slow combustion stove and oak staircase, two dining rooms, an inner hall with back stairs, a kitchen and back kitchen and storeroom.  The first floor had five bedrooms.  The second floor had a servant’s bedroom and a large attic with apple store.  At the rear there was a wash-house, outside W.C. and a coal store.

There were major changes going on in Thornbury at time as property developers were fighting to expand the town and build new house surrounding the old core of the town.  The Saw Mill and surrounding land and some old unwanted cottages were sold to Voiseys, the developers to enable them to build Hillcrest and Blakes Road.   The property deal included The Shen, which was immediately sold off and acquired by the Hawkins family for £3,600.  The Hawkins family paid an extra £275 to Edmund Cullimore Grace for the land adjoining Shen used as a tennis court.

Leslie James and Joan Mary Hawkins – acquired Shen on 28th April 1959 and moved there to enable them to vacate their home at Warwick House, St Mary Street.  Leslie was a master builder and ran the firm of P. G. Hawkins with his brother, Lyndon.  The Hawkins family lived at Shen for many years until 3rd May 1977 when they sold the property to the Wheldons.  Read more about the Hawkins family

The Wheldons – we don’t know anything about the Wheldons – Keith Rodger Norman Wheldon, Elizabeth Mary Wheldon and Muriel Beatrice Wheldon were all mentioned on the conveyance of 3rd May 1977 when they bought the property for £32,800.  Their address at that time was 23 Kempton Close, Thornbury.  They only lived there for about five years before they sold it to the Eastons.

The Eastons – on 6th January 1982 the Wheldons sold the property for £78,000 to Christopher David Easton and Marilyn Eleanor Easton of 20 Morley Square, Bishopston.

The Burnhams – in about 1985 the house was bought by Dr William Harvey Burham and his wife, Isobel.  Dr Burham had moved to Thornbury in 1980 to replace Dr Roger Prowse in his practice at the Thornbury Health Centre.  He had recently returned from a position as senior medical officer on the South Atlantic island of St Helena.  Dr Burnham took early retirement in 2003 and moved away from Thornbury.